More than two dozen racers from Whistler and Pemberton to participate
Jul 16, 2014 6:00 PM By: Eric MacKenzie 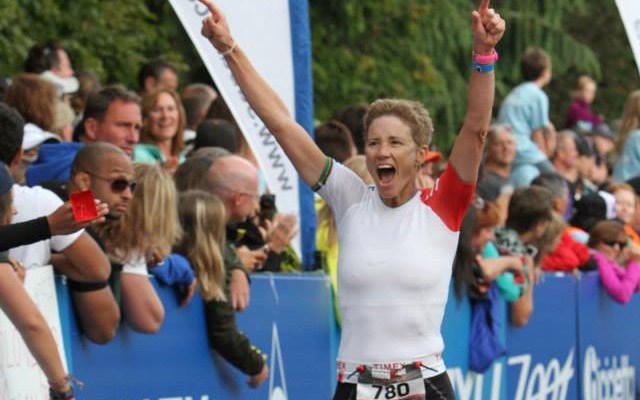 Back for more Pemberton's Nancy Johnston, seen here racing Ironman Canada in 2013, is one of a few local triathletes racing the event again on July 27. facebook photo

After seeing Ironman Canada first hand in Whistler in 2013, it didn't take too much convincing for Anastasia Tukavkin to sign up for this year's event.

That's despite having to learn to swim first, never mind the fact that the Whistler resident has never been a triathlon competitor in the past.

"I've always joked around, saying that I want to do one," said Tukavkin, 27. "But after being here in Whistler last year, I'd never been so inspired (as I was) by everyone and anyone partaking in it.

"The next day, I just signed up for it."

Tukavkin is one of at least two dozen triathletes registered for the return of Ironman Canada who call the host communities of Whistler and Pemberton home. Some are coming back for another try after completing the event last August, others are past Ironman finishers eager for the chance to now race at home.

And then there are some like Tukavkin, whose experience in the three sports coming in was limited to some casual running and mountain biking.

"It's pretty drastic, and some people thought I was crazy," said the Aussie transplant. "I never swam in my life until last year, so signing up, I had to learn to swim."

Tukavkin has been working with local trainer Christine Suter to get ready for the race on July 27, and building up to the event by completing some shorter races around B.C. over the past few months.

"It's quite terrifying and nerve wracking. I can't believe it's less than two weeks away. It's been a crazy 10 months, pretty much," she laughed.

"But at least I did a half Ironman a couple of weeks ago in Victoria, and I'd never had so much fun before in my life."

If being a triathlon newbie wasn't challenge enough, Tukavkin has been dealing with a series of injuries that have hampered some of her training. The latest setback has been tendonitis in her hamstrings, but she said that's only added to the motivation to become an Ironman finisher.

"I'll be just the happiest person ever to cross that finish line," she said. "It would be amazing to do that."

And the Pemberton resident will be back on the start line again this year, determined to come back after having so much fun racing in her own backyard in 2013.

"It was such an amazing day last year, you'd be hard-pressed not to want to do it again," said Johnston. "I've been training for triathlon for a long time right here, so the chance to race here is fabulous. I love to share the roads and trails with all these people that come here and train, and it's fun to meet them out there."

Johnston said she was pleasantly surprised by her finish time of 12 hours, eight minutes, 45 seconds last year, and the 48-year-old said she was buoyed by friends and other supporters out on course the whole day.

"I've never had that many people cheer for me before," she laughed. "I didn't know what that effect would be like, and now I really know that it gives you wings.

"You knew somebody at every intersection."

Although Johnston has a better idea of what to expect from Ironman Canada this year, she is also anticipating it to be a different race — particularly if the past week's scorching temperatures are still hanging around on July 27.

"I think it's going to be a hot day, and if it's (windy), it's going to make for a longer bike ride," she said. "Last year, it was the most ideal day you could imagine."

Ashley McMillan was one of the top local finishers in 2013, reaching the line just before the 11-hour mark. He'll be looking to post another strong result this year, too, but what is it that brought him back?

"Short-term memory, I guess," McMillan joked. "No, I thoroughly enjoyed it last year. It's an amazing experience... It was a great atmosphere to be in and around.

"And I just love the training."

This year, McMillan said he plans to post a faster finish time on the course — which features a 3.8-kilometre swim, 180-km cycling leg and 42.2-km running route — but his "blue sky goal" is to earn a berth into the Ironman World Championships that will take place in Hawaii in October.

"I've got a huge age category, so it's a tough one to get out of, depending on who turns up on the day," said McMillan, who will compete in the men's 40-44 division. "We'll see what happens, but I figure I won't be far off if everything goes right."

McMillan is part of the Pan Pacific Whistler team that is also trying to meet a fundraising goal along the way. He and Daryl West, Gary Martin and Adam Ward are hoping to raise $10,000 for Canuck Place Hospice, and they put a big dent in the goal during a Spin-a-thon held in late June, garnering approximately $3,000. They've so far collected more than $8,000 altogether.

The group has one more pre-race event to help reach the goal — a pig roast taking place Saturday, July 19, starting at 5 p.m. at the Dubh Linn Gate. Search "Pan Pacific Whistler Ironmen" on Facebook for more info or donation links.