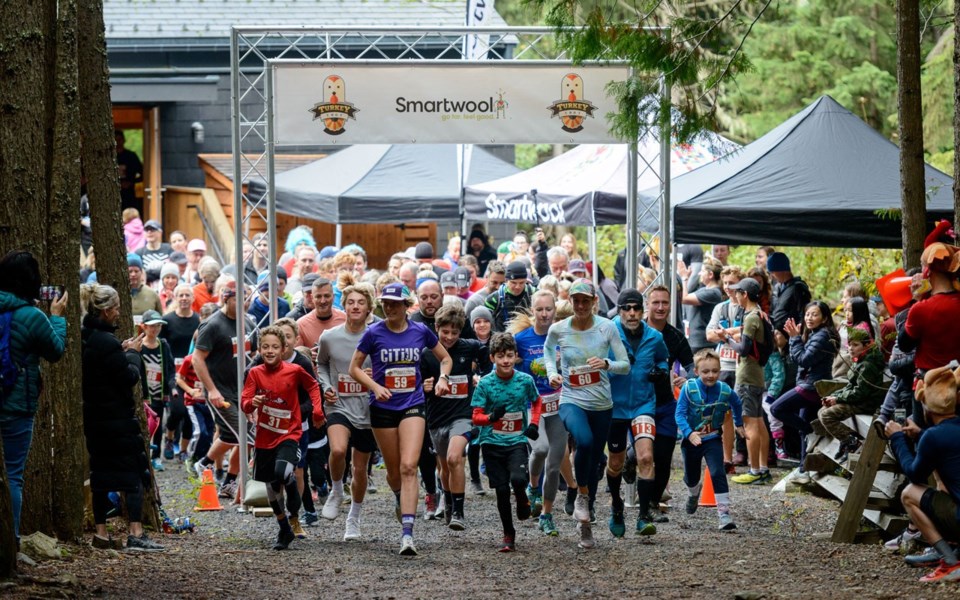 The first-place winner of this year's five-kilometre Turkey Trot, which took place on Sunday, Oct. 13 at Lost Lake Park, almost didn't run the annual race at all.

"She was a last-minute substitute for another local runner," said race director Dave Clark.

Steph Racine filled in for a friend who had broken her ankle just days before and wound up crossing the finish line in 20 minutes and 52 seconds, earning the top female spot and the top overall place.

The men's side, meanwhile, saw three under-18 finishers on the podium. Vancouver's Sam Brown finished in 21:54, Pemberton's Jack Hartman came in second in 22:20, and Declan Kirker finished third in 23:09.

In the 10 km distance Whistlerite Lee Ann Ahrens came in first on the women's side in 44:16, Maud Grasmenil, also from Whistler, finished in 45:26, while Courtney Schick crossed the finish line in 49:01.

Whistler-based triathlete Karsten Madsen came in first place overall on the men's side in 34 minutes, local Chris Bowen was second (39:43), and Peter Slavkovsky came in third at 41:29.

"Sunday was perfect running weather," Clark said. "[The course] takes advantage of the natural trail and sense of adventure. It was neat to hear it come back from the runners too. We heard it numerous times."

Sea to Sky hockey teams clean up at tournaments

The Sea to Sky Bears brought home some hardware this Thanksgiving, with the Midget team taking home a gold medal in Comox and the Bantam squad picking up a bronze medal at Port Moody's annual Turkey Tourney.

The Sea to Sky Bears–Midget A1 team, made up of players from throughout the corridor, executed a clean sweep at Comox Valley Minor Hockey's Midget Tier 1 Thanksgiving Tournament, beginning with an 11-2 win over the Kerry Park Islanders. They followed up that win with a similarly impressive 12-1 victory over the Tri Port Eagles, before crushing the Comox Valley Chiefs 8-1. They managed to beat the Peninsula Eagles 5-0 in the semi-final, with a shutout courtesy of starting goalie Sam Gilmore.

Finally, the Bears faced North Vancouver's Midget A1-T1 team in a thrilling final that saw the Sea to Sky squad emerge victorious in a 6-5 overtime win. Winger Austin Ross earned his first hat-trick of the season, while Ben Brownlie netted the OT winner. Goaltender Gilmore earned himself the Player of the Game, with some very timely saves to keep the Bears in it till the very end.

Meanwhile, thanks to the Sea to Sky Bears' younger counterparts, the Bantam A1 club, the corridor was similarly well-represented in Port Moody over the weekend.

The Bantam squad began their weekend with a 3-1 loss against the Surrey Thunder, before rebounding with a 5-0 shutout win against Comox. The boys followed up by securing their second shutout of the weekend with a 2-0 win over host team Port Moody.

The boys geared up for an exciting re-match again Surrey in the semi-final, but despite outshooting their opponents 42-18, a late goal with just over one minute and 30 seconds left in the third period saw the Bears suffer a 4-3 loss.

However, the Bears came back strong in the small final, securing the bronze medal with a 5-1 win over the North Shore Winter Club, with Joel Mazzotti named the final's Player of the Game. "We came here to find our game/we found it/maybe not the colour medal we wanted but brought home a Bronze and much more to build from October for the future," wrote Bears coach Tim Knight on the team's social media.

A group of Whistler trail runners represented the resort well at the Oregon Coast 50K Ultramarathon in Yachats, Ore. on Saturday, Oct. 12.

Two of those runners, Louise Stevens O'Brien (who also happens to be a member of Pique's production team) and Kate Entwistle cracked the women's division top-10, with O'Brien securing eighth place with her time of five hours, 42 minutes and 55 seconds. (5:42.55). Entwistle was hot on her heels, crossing the finish line less than a minute later to earn ninth place in 5:43.01.