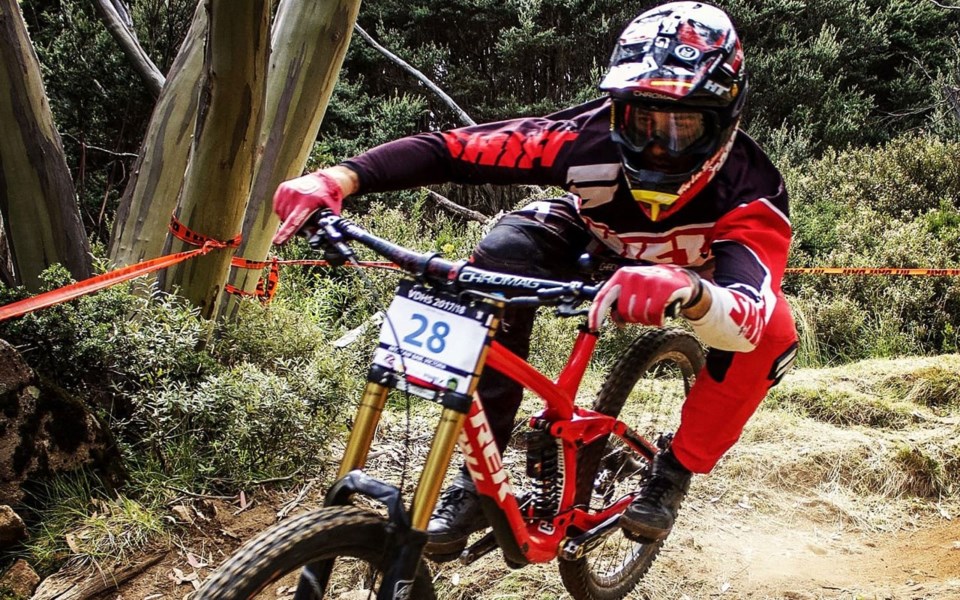 On your tail Harrison Tailby scored a second-place showing in his category at the MTB DH Nationals at Panorama Mountain Resort on July 29. Photo courtesy of Harrison Tailby

For having had a relatively short downhill career so far, Harrison Tailby has had his share of frustrations.

In just his third year of downhill riding, one might think he'd have been happy taking second in the open men 17-to-29 category at the Canadian MTB DH Nationals at Panorama Mountain Resort on July 29. However, Tailby finished just 0.42 seconds back of champion Evan Wall of Revelstoke, and if he hadn't been stuck behind an "unpredictable" rider from a different category, feels he might have had top spot.

"That was a bit of a frustrating one. I dropped in first for my category and I actually caught the guy who was riding in the category in front," he said. "It cost me a lot of time.

"I would have been in the top 20 elite otherwise if it wasn't for that.

"At the same time, second is what a lot of people are really happy with. It's just that I'm pre-riding this circuit to come here next year in elite and see how I go."

Tailby got into downhill riding after he first watched the Mont Ste. Anne World Cup race in 2015 while at home in Melbourne and was inspired to come to Whistler to start riding. In 2016, he entered Crankworx as an amateur, but crashed before his first big race, the Garbanzo DH, suffering a broken hand.

"That night, I took a bunch of anti-inflammatories and I could move my thumb and index finger. That's perfect. That's my shifter and my brake, so I can ride," he said. "The next day, I went up for my race run and duct taped my hand to the handlebars."

Tailby struggled through the Garbanzo, but placed ninth in the Fox Air DH. He crashed again in practice, separating his shoulder, with the worst part being his travel insurance had recently expired.

Tailby rehabbed on his own, had a strong year of riding in 2017 and this year, when racing at Sun Peaks, he connected with the Intense Graviti Driven team and was invited to join for the next race at Silver Star, receiving a jersey with his name on it.

Tailby will be in action at Crankworx as he entered the Canadian Open and Garbanzo downhill races for this year in the open men's division, but if he receives a UCI race license in time, will jump to the pro event.

"There were holes everywhere in the course, which made it that much more interesting, and I think everybody found it more challenging because of that. I'm happy to put a good run down in those conditions," he said. "It gave me a little bit of a boost because I had to ride just that much better to get second."

Milley got some international experience this year, as he joined Cruz for three World Cups, and plans to attend the World Championships in Switzerland in September.

"It's been a really fun season so far, just getting to see the world and travelling," he said. "The biggest differences I find at the World Cups are just how different the courses were in speed and how much you need to focus in on each and every little section because everybody is so ridiculously fast there and you have to be at the top of your game to even be able to compete with those guys."

Milley will head to Mont Ste. Anne for the World Cup stop this weekend and will do all three downhill races at Crankworx upon his return. He's got an eye on taking a step forward in Switzerland, as well.

"Representing Canada has, honestly, been my dream forever. If I got top 20 at worlds, that would definitely be the best. I'd be so happy," Milley said.

Meanwhile, Whistler's Georgia Astle took third in the UCI elite women's race in her first downhill race of the season, finishing behind only Vaea Verbeeck and Miranda Miller to place herself in good company. Astle had primarily focused on enduro to this point in the season and had only got her bike just a week before nationals.

"I didn't have huge expectations before competing because I was still figuring out my bike," she said. "I was pumped as soon as I got on the track. I was stoked to ride and I put together a good run."

While some riders enjoyed the more blown-out course, Astle said it made life a little more difficult for her.

"It was definitely a challenge for me when the tracks were like that, when there were lots of holes in it and it was dusty. It makes it harder to control your bike and you're very tired. It takes a lot out of you every time you do a run," she said.

At Crankworx, like Milley, she plans to do all three downhill races as her season winds down.

"I haven't done all three in a couple years, so that'll be a lot of fun," she said.

Other top-five results at nationals came from: Whistler's Ewan Mackay (second in UCI senior men 19-to-29); Tobias Bethge (third in UCI master men 30-to-39); and Pemberton's Tegan Cruz (fourth in UCI U15 men). Full results are online at www.cyclingcanada.ca.