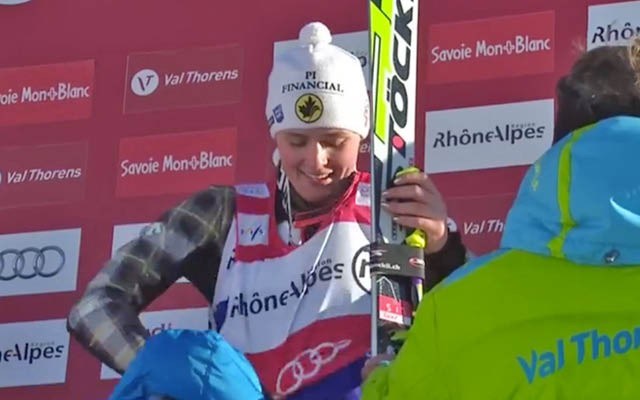 First-place fashion Whistler's Marielle Thompson pulls the World Cup leader's bib back on after capturing her second win of the season on Friday, Jan. 17 at Val Thorens, France. One World Cup race remains before the Olympics. Photo courtesy of FIS

Could another Olympic ski cross medal be headed back to Whistler? How about two?

Nothing is guaranteed in ski cross, but the chances of either scenario taking place continues to look promising, as resort residents Marielle Thompson and Dave Duncan have shown no signs of slowing down after their hot starts to the season.

Thompson picked up her second victory of the season, while Duncan earned his third podium finish in four races by capturing a bronze medal from the second half of a back-to-back World Cup stop at Val Thorens, France on Friday, Jan. 17.

Both head into this week's race, the last one before the Olympics, as the World Cup leaders.

Nobody's been better at getting the hole shot than Thompson this year, and her dominance out of the start gate led her to the top of the podium on Friday, as she won all of her race heats and didn't trail in a single one.

"I really was strong in the starts to today. I try to make that my first focus when I'm going down the hill — just to get out in front and then make smart moves the whole way down," the 21-year-old said. "There were tough features today with different changing winds, so we really had to adjust from run to run."

Through six races, Thompson has failed to win just three of her race heats. She has also yet to finish outside the top five, and has collected three podium finishes.

"I'm definitely skiing with a lot of confidence," Thompson said of her consistency this season. "I keep going back to this, but I really trained hard this summer and I'm glad it's still paying off. I'm just sticking to my own plan and it's really working for me."

Thompson finished fifth in the previous day's race at Val Thorens, an event that got called off after the Round of 32 due to windy conditions. She won her preliminary heat before officials ended the race and ranked the racers still alive on qualifying times.

The 2012 Crystal Globe winner will arrive in Sochi as a favourite for the podium, but said she's been trying not to look too far ahead as she prepares for the pressure of the Olympic spotlight.

"It's definitely going to be very different on such a big stage and I've never been there before," she said. "I'm going to try to stay in my zone, not overwork myself and stay in the moment."

Danielle Sundquist won the small final to finish fifth on Friday for her best result of the year, while fellow Canadian Georgia Simmerling ended up sixth on Thursday and seventh on Friday.

Duncan ended up seventh in Thursday's shortened race before coming back to post his third-place finish on Friday. The visit to Val Thorens was the first World Cup stop since Duncan claimed back-to-back victories at San Candido, Italy, in December.

The 31-year-old reached the final alongside teammate Brady Leman on Friday but finished behind winner John Teller of the U.S. and Sweden's Victor Oehling Norberg.

"In the final, I actually had a pretty decent start but maybe got a little over-anxious and didn't make the proper move over the first landing, ended up going skyrockets-in-flight and landing fairly deep and watched the other three guys kind of pull away," said Duncan. "But those guys were so tight and kind of tangled a little that it allowed me to catch up."

Canada's Chris Del Bosco was awarded the win on Thursday, his first podium finish of the season.

Duncan arrived in Val Thorens with the World Cup leader's bib and was excited to still have it when he left, even if his lead in the standings is a slim five points over Norberg.

"No complaints here, leaving Val Thorens with the red bib, although it's a little closer," Duncan said of his margin atop the rankings. "It's still a very cool feeling and I hope to hold on to it for a little bit longer."

The team races a World Cup on Saturday, Jan. 25 at Kreischberg, Austria in what will be a preview of the 2015 world championship venue. The Olympic team will be introduced upon the team's return home to Canada on Jan. 27.

Canada was allotted a quota of 26 athletes for freestyle ski competition in Sochi, and with the four other disciplines having named 20 skiers to the Olympic team this week, all indications are that Canada will be sending six ski cross racers. Expect Thompson, Simmerling and Kelsey Serwa to make up the women's team and Duncan, Del Bosco and Leman to round out the men's roster.