Loop the Lakes half marathon drawing attention, registration up over last year 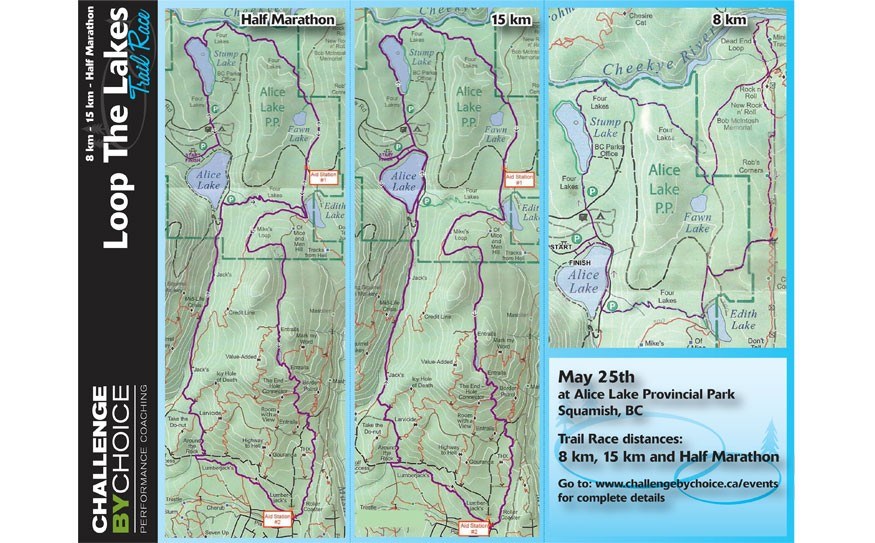 "I'm pretty happy with what's come in for registration, and everyone out here is so last minute so I think we'll get a lot of day-of-race registration," said Segger. "We're seeing such a mix of people. Trail running is just growing so much, and now we have people coming up from Vancouver and Washington as well, mainly for the half marathon. Squamish is becoming a destination for events, so more people know about us than in the past."

She said it was unfortunate that her May 25 race takes place the same day as the Nimby Fifty mountain bike race in Pemberton, but she couldn't find another open weekend.

"There are so many events now in this part of the world that it's a challenge to pick a day to put something on, you're really pretty limited and there was no way to do this without some overlap," she said.

There are now three distances in the Loop the Lakes — an eight-kilometre loop, a 15km course and the 21.1 off-road half marathon distance. Segger said the 8km course is flat and relatively non-technical to attract beginners. As well, a lot of people are using it as a tune-up for the Whistler Half Marathon the following Saturday.

The longer routes are more hilly and more technical with both routes following the Four Lakes climb as far as Edith Lake, before following a selection of trails including Mike's Loop, Entrails, Roller Coaster and Lumberjack's back to Alice Lake. Once there, the 21.1km runners climb back up to Edith Lake and run backwards on the Four Lake Trails to the start/finish area.

As well as the main runs, there's also a kids' one-kilometre run.

Registration is through Challenge by Choice (www.challengebychoice.ca) and price varies by distance — $60 for the half marathon, $50 for the 15km run and $45 for the 8km course.

Segger is expecting at least 175 runners this year, although she'd like to break 200. In the future, she's considering adding a marathon trail run as well.

"It's something we don't have here," she said. "Not everybody is up for running an ultra distance like 50km or 50 miles, but a lot of people think of a marathon as a safe distance. That's something I can see coming down the pipe in the future."