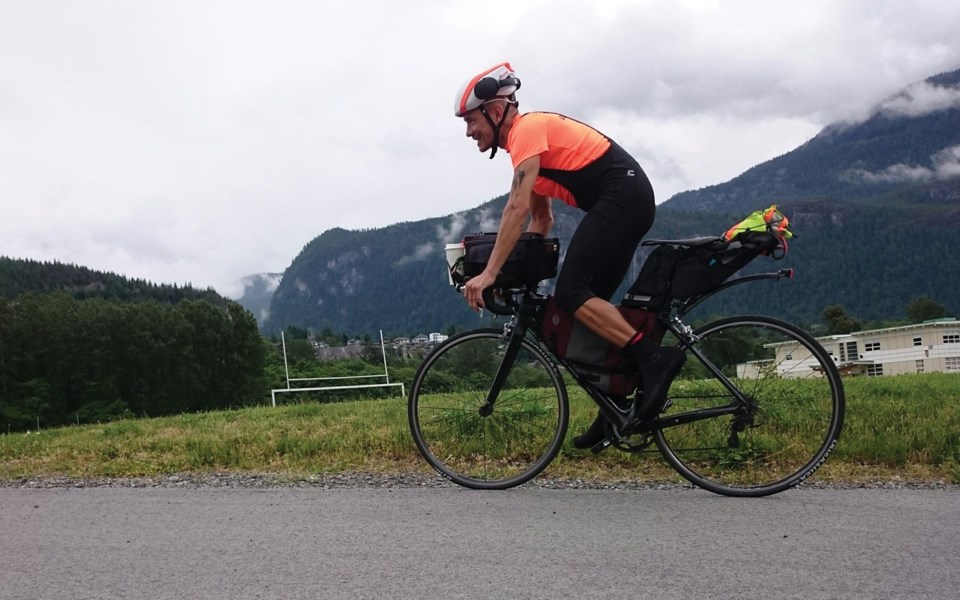 HEADING EAST Jason Loutitt is set to embark on a fundraising ride to Winnipeg and back in support of the Squamish Helping Hands Society. <ParaStyle:CUTLINE\:CUTLINE Credit>Photo by Shouken Terauchi-Loutitt

As he gets set to embark on a 5,000-kilometre bike ride, Jason Loutitt has a lot on his mind.

The 46-year-old world-class ultrarunner and longtime Squamish resident plans to ride from Whistler to Winnipeg and back starting on Friday, June 19, and he has several reasons for the trip.

At the forefront of the journey, which he's dubbed EnviRIDEment, is to promote bicycle use and environmental protection.

Other motivators are deeply personal. Firstly, Loutitt, who is of Métis background, is looking to bring a message of hope to Indigenous communities that are particularly impacted by the COVID-19 pandemic.

"It's really troubling right now for world Indigenous cultures with COVID," he said.

"At first, I thought, 'We need to get a message of help,'" he added later. "But I think it's going to bring a positive message ... This is going to be a message of hope, saying we do have hope."

Additionally, Loutitt's trip will serve as a fundraiser for the Squamish Helping Hands Society's Under One Roof program. Loutitt has experienced homelessness "off and on" for several years, in part due to a meth addiction.

"I've experienced the real class difference of being homeless and not having anything to then being a world-class athlete and looked up [to] by others," he said. "I have a lot of experience and knowledge to be able to pass on."

Though Loutitt is completing the ride self-supported, with no team or vehicle alongside him, he noted that he's starting the ride on a thin budget and is also seeking donations and sponsorship to help fuel the journey, with a separate GoFundMe online at gofundme.com/f/21eg6x7d1c.

"I'm going to be carrying my tents, and all my clothes and food," said Loutitt, noting he'll grab extra sustenance along the way.

He'll be well prepared, as since the start of February, Loutitt has completed roughly 90 trips from Vancouver's Kerrisdale neighbourhood to the Sea to Sky, with 30 of those trips to Whistler and back, and the remainder being a return trip to Squamish. In that time, he said he's averaged 3,000 kilometres per month on his bike.

Loutitt plans to start in Whistler at the Olympic rings at 6 a.m. on Friday, June 19, swinging by Vancouver City Hall before heading east, making it to the Canadian Museum for Human Rights in Downtown Winnipeg. He'll return along the Yellowhead Highway's northern route.

It will also be significant for Loutitt's ride to take place on two important days for him, the Summer Solstice on June 20 and National Indigenous Peoples Day on June 21.

He said the solstice, in particular, is considered one of the most spiritual days of the year.

It's also key to Loutitt to include the Sea to Sky on his journey.

"I'm sure the drivers are sick of ... seeing me on the highway so much," he said. "I call that highway my home. I really love it and the workers take care of it and, for the most part, I haven't had any problems with any drivers."

As well, part of Loutitt's time while homeless was spent living in Whistler Village, making it a meaningful kickoff point for him.

"Starting from [Whistler Village], for me, is a lot about healing," Loutitt said, adding that he gained wisdom and knowledge from the people he met during that period of his life.

At some point, Loutitt is eyeing the Canadian record from Vancouver City Hall to Halifax City Hall, which should take a little more than 13 days. He had pondered the trip this time out, but it presented challenges getting home. With the Manitoba capital situated near the country's geographical centre, a return trip is close to the cross-Canada distance.

Loutitt explained that he fell in love with cycling while in Europe in advance of his 12th IAU 100K World Championships race in 2018, as he biked from Normandy, France to the race site in Croatia.

"I had two months to get there. I didn't know what I was going to do. I realized that I fell in love with it," he said.

He was planning to ride a similar route later this year in the Transcontinental Race from the French coast to Bulgaria, but it was called off due to the COVID-19 pandemic.

Not to be deterred, Loutitt then set about planning his epic ride in Canada.

"I'm really cherishing my health and my ability to do something like this," he said.

To keep up with Loutitt's efforts, including a planned daily podcast, visit enviridement.com.