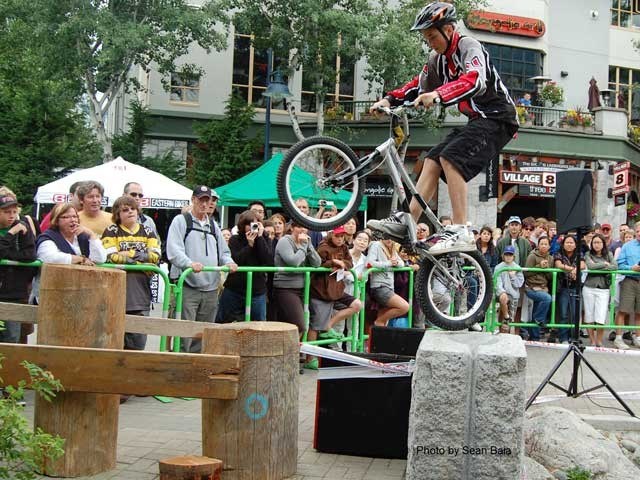 Although Crankworx has ratcheted up the crowd factor this year with the addition of a second dual slalom and a best trick competition, one of the events never fails to entertain.

In its third year with Crankworx, Trialworx — and Kidsworx for riders 10 and under — is continuing to grow. Organizer Michael Baia, father of trials riders Jason and Scott Baia, is expecting roughly 100 riders in the main event on Saturday, Aug. 16, and between 30 and 40 kids 10 and under in the Kidsworx contest on Friday.

Although his own sons have been competing for years, and Scott remains the only North American ever to win a world event in Europe, Michael says the sport never ceases to amaze him.

“Everything happens right in front of you, you can be 10 feet away watching a guy drop eight feet onto a log from a rock. I’ve been involved for quite a few years now and it still amazes me every time,” he said.

Trials riding is not about riding fast or landing tricks, but about control. Riders will have their choice of six different lines about 50 metres in length. The goal is to get from one end to the other, moving up and down impossible obstacles, without touching your feet on the ground. Riders get deductions for dabs, and for going outside the time limit for each line.

Each line also has different moves, allowing amateur riders to compete alongside the top pros.

According to Michael Baia, three of the lines will be around Ross Rebagliati Park in the Fitzsimmons Creek area, and the other three will be in the village. Spectators can follow riders around, or stay put in one spot to watch how different competitors challenge the same line.

The Kidsworx competition takes place on three smaller lines, with the kids 10 and under getting encouragement and advice from the pros.

“It’s just as exciting as the main event, it’s exciting to watch all these kids 10 and under ride through the course,” said Baia. “In the village section they have their names announced, and their parents and grandparents are there taking pictures. Everybody gets a medal, and everybody has fun. The main event is a lot more serious, but it’s amazing to watch the up and coming kids out there.”

Some of the kids, including one six year old, will be competing in the main event on the full course.

Unfortunately, Baia says trials remains a niche sport despite the number of spectators that come out for events, but he says there is interest in holding a World Cup event as part of Crankworx next year that would bring out the top names in Europe as well as North America.

“It’s really an impressive setting for the event, with venues on the Fitz and in the village and probably 500 to 1,000 spectators at each spot,” said Baia. “It’s a little different than all the other events, but if you can ride trials you can ride pretty much anything you might find on a trail. I know my sons don’t ride the North Shore that often, but when they do it’s no problem because of all the skills they learned in trials biking.”

The Friday, Aug. 15 Kidsworx competition for kids 10 and under runs from 1 p.m. to 2:30 p.m., followed by the novice, poussin, sport, and femina riders from 3 p.m. to 6 p.m. Two lines will be in the village and one in the Fitzsimmons Creek bed by Rebagliati Park.

On Saturday, the competition features the expert, master and elite categories, starting at 10 a.m. and running to 2 p.m.

The Baia brothers will also be doing trials demos in the village at Town Plaza, near the gazebo, from Aug. 11 to 17, four times a day. The final location for the different lines will be posted during the week for spectators, but likely sites include Town Plaza and man-made creek outside the Village 8 movie theatre. Organizers are also hoping to have a course at the base of Whistler Mountain.

Womenzworx back for second year

After a successful debut at Crankworx 2007, organizers are bringing back Womenzworx, which includes two days of discounted lessons and rentals for female riders and a women’s only Gala Competition on the final day with $3,200 in prize money. Katrina Strand, a past national champion and World Cup downhill racer, is once again organizing the event, along with Lisa Lefroy, a professional mountain biker.

On both Aug. 11 and 12, Whistler-Blackcomb will be offering half day clinics for $29.99, including lift tickets. Package deals, including bike rentals, protective gear, the clinics and lift tickets are just $79.99. As well, the first 100 women each day will get a free Whistler Mountain Bike Park lift ticket.

On Aug. 12, the day will wrap up with the Gala Competition event. As with last year, the event takes place around the mountain with judges watching competitors on three judged sections through the bike park. They’ll be looking for style, fluidity, tricks, air time, and creativity.

Registration is available at www.crankworx.com.