Whistler puckster settling in with Brock Badgers despite cancelled season
Nov 23, 2020 11:00 AM By: Dan Falloon 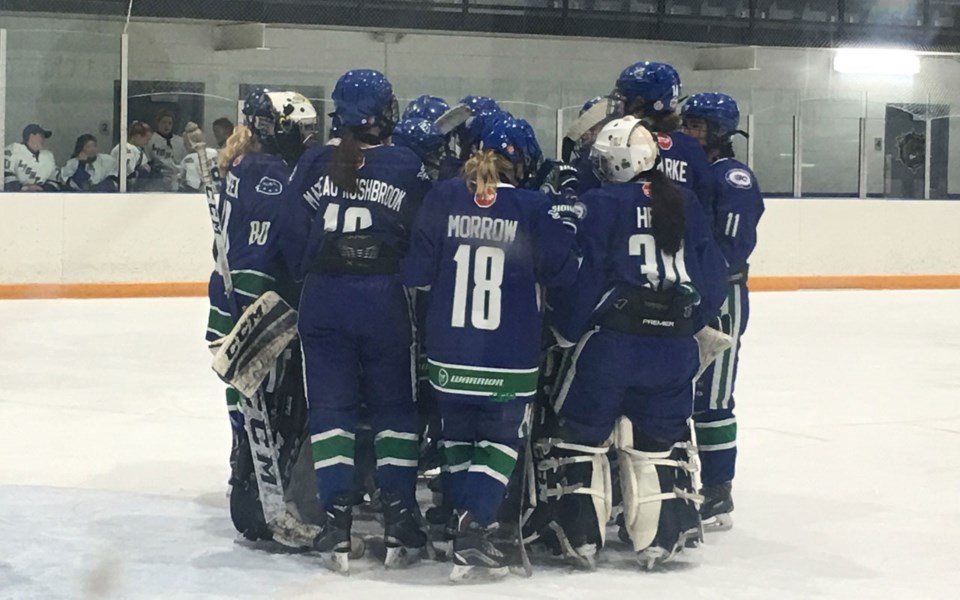 RISING COMET Whistler’s Camie Matteau Rushbrook, who was recently awarded a BC Hockey scholarship, celebrates with her Greater Vancouver Comets teammates during the 2018-19 season. FILE PHOTO

Matteau Rushbrook saw the news through an association newsletter, which revealed a bevy of scholarship winners. She recognizes the tough position BC Hockey is in, as it usually announces such news at its annual Congress. The event was cancelled due to COVID-19.

“It definitely helps out a lot,” said Matteau Rushbrook, who scored six goals and 19 points in 32 regular season games with the Comets last season. “I am currently going to school in Ontario, so I had a lot of extra travel costs and university is a big expense.”

According to BC Hockey, the scholarship is awarded in memory of Nelson-based coach Hargreaves, who “was an integral part of hockey development and coaching. He also combined his passion for hockey with his artistic abilities, illustrating instructional manuals for Hockey Canada.”

Matteau Rushbrook said she hadn’t heard exactly what put her over the top, but said her long-time involvement in the organization was likely a boost.

“It’s really nice to see that they are appreciating my involvement,” she said.

Matteau Rushbrook is currently in her first year at Brock University in St. Catharines, Ont. where she’s studying sports management and a member of the women’s hockey team.

She said she was drawn to the school by its one-of-a-kind sports management program, which will help her as she strives to become a player advocate, while she was eager to join a team that was tied for third in the 2019-20 regular season before falling in the first round of the playoffs.

“The coaches and their philosophy really seemed to fit really well with what I believe,” she said.

The Badgers were also thrilled to secure a commitment from Matteau Rushbrook.

“Camie is excellent at working the corners and going hard to the front of the net,” Badgers assistant coach and director of recruiting Brad Nicholson said in a release announcing Matteau Rushbrook’s commitment in July. “Camie is adept at retrieving loose pucks and winning battles along the boards. We are looking forward to the grit Camie will bring to our team.”

Both sides will have to wait to fully appreciate one another, though. Matteau Rushbrook said that though there was some initial hope of starting a campaign in January, there will be no 2020-21 Ontario University Athletics season at all.

“Right now, we have limited ice, but we’re on the ice three days a week, we get in the gym twice a week and we still have a whole bunch of virtual activities,” she said. “We still have training and we’re still able to improve and get better for next season.”

Being her first season with the team, Matteau Rushbrook acknowledged it’s been challenging to get acclimatized.

“It’s been tough coming in and not being able to play, so it’s been kind of tough to get to know everyone,” she said.

Matteau Rushbrook noted that she lived in residence when she first went east, but soon moved off-campus into a house with some of her teammates.

“That was really good to get to know them better in that sense, but unfortunately, there isn’t much opportunity to get to know them as hockey players,” she said. “But as people, it’s great to have good teammates, good coaches. Everyone’s making sure that we’re doing all right being away from home for the first time.