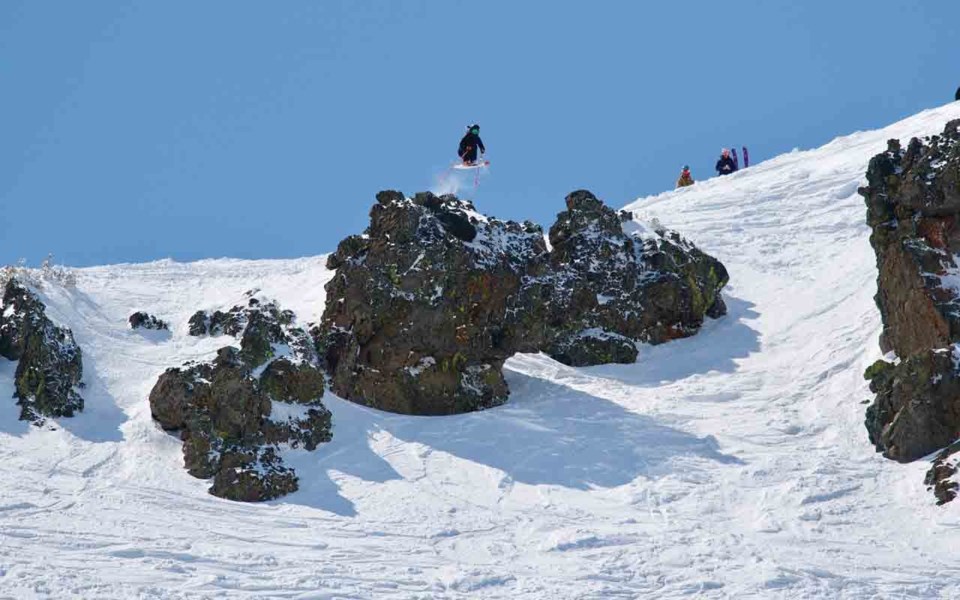 LIVE ON Olivia McNeill, shown in a prior competition, had some bad luck at the Freeride Junior World Championships in Austria, but is looking on the bright side. Photo submitted

There weren't any precious metals for the two Whistler Freeride Club skiers in the mountains of Kappl, Austria, but both feel enriched for having gone on the hunt.

At the Freeride Junior World Championships on March 22, Benjie McMaster came up with a solid result on the men's side, placing seventh out of 31 challengers. On the women's side, Olivia McNeill's aggressive gambit was unrewarded as she finished ninth out of 11.

Both reported some challenging conditions over in Europe. For his part, McMaster said the snow provided a significant hurdle.

"The snow was really tough, so I was happy to be at the bottom on my feet," he said. "We had good snow over the weekend coming into it, but then the temperature rose a lot, so it got heavy. But then the temperature dropped overnight, so we got a nice crust on it. It was about an inch thick and really crunchy when we got up there."

To counter the weather effects, McMaster sought lines that were shaded to minimize the sun's effects. While dropping earlier is generally advantageous, in this case, McMaster was able to let his challengers do plenty of the heavy slogging before it came to be his chance. Though he had created an outline of the terrain he wanted to cover as part of his visual inspection prior to the competition (riders are not allowed onto the course in European competitions, while they are in North America), he altered course at times.

"A lot of people crashed before I went—50 per cent, maybe a bit more," he said. "I held back a little bit more than I planned on, just because it was really tough out there. I changed a few options up going into the bottom.

Aside from the visual inspection aspect, McMaster said the other significant difference at worlds was the sheer scope of the course, as competitors were granted myriad features on which to show their best.

"It's long and there are so many options on it. It's a big face compared to what we're used to," he said. "It's longer than your typical venue."

After competing at his first overseas event, McMaster thanked coaches, parents, and friends who supported him on his journey.

"It was a great event and one I won't forget for a long time," he said.

Meanwhile, as the defending North American champion, McNeill came in with cachet, though she was ultimately stymied by some bad luck.

McNeill, dropping as the last competitor in the women's ski event, had planned an ambitious line. However, on the hardened snow, she couldn't land one of the big drops and finished ninth.

"Conditions were not amazing the whole time I've been over here. That is what kind of got me. I hit one thing and got on my inside edge and hit another thing. There was nothing I could do. It's unfortunate, but it was still awesome," she said. "Coming off of the drop before I fell, I got to what I thought was my take-off and I realized getting on top of it that I was just a little lower, so there were a lot of bomb holes that I wasn't expecting."

McNeill added that when she fell, she got sent offline and missed a second planned drop.

"I didn't get to do that one, which is a shame because I was really looking forward to it," she said.

As well, while she had a fall, she was far from the only competitor to be hit with that misfortune as the course was beset with obstacles.

"There was a bunch of debris in the run-outs for all the chutes, so that got a bunch of people. There were more conservative runs from everyone because in the snow, you just couldn't do certain things," McNeill said.

Despite lower results than she'd hoped for, McNeill accentuated the positives, noting the visual inspection elements were in no way the issue.

"I had never visually inspected before, so it was good to know that I wasn't lost," she said. "I enjoyed visual inspection. It's fun, it mixes it up and it makes the run more exciting."

Aoife Gannon topped the women's 15-to-18 event, while Kayla Constantini and Dane Jewett won the women's and men's under-12 events, respectively. Also medalling was Drea Dimma, who placed second in the women's 12-to-14 event.

Full results are online at freeskiers.org.