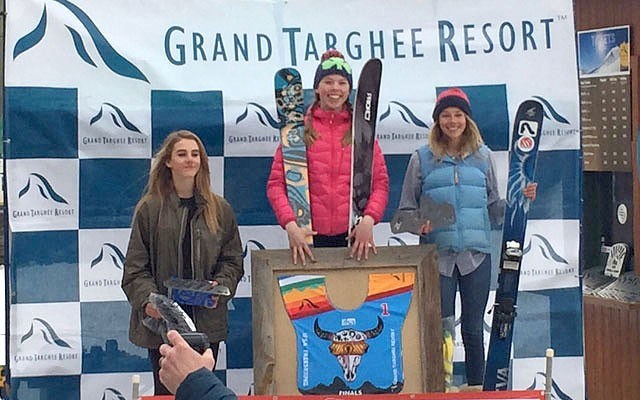 Bot no one told Olivia McNeill that.

In a sport where top competitors are separated by hundredths of a point, Vancouver-based freeskier McNeill was seeking to overcome a 2.5-point gap at the IFSA North American Junior Freeski Championships at Grand Targhee Resort in Wyoming over the weekend. She scored a 63.73 in total after a 29.93 during a tentative first run before unleashing and scoring a 33.80 — the highest of any competitor in the 12 to 14-year-old women's category in either run.

In her initial run, she recalled taking a safer line and slower approach that left her a little bit back of the leader.

"Usually, in qualifiers, I'm so nervous," she said. "As soon as I start skiing, it's so much better, and then usually before finals, I'm no longer nervous. In finals, I just do it or I don't.

"Like it said on my jerseys, I do or do not, there is no try," she explained of her Yoda-inspired threads.

McNeill described her final run as a fast one, where she quickly took on a pair of drops, did a large turn to a rocky moguls section, skied into a gully, around a clump of trees and took on one more drop — incorporating a hop for added style — to finish off with a little kicker.

Foose explained the championships take only the top 10 per cent of riders on the tour, so there's little room for error if one hopes to come out on top.

"She didn't put down a classic Olivia run in qualifiers," he said. "She skied slowly and a bit tentatively and when she was finished, she was shaking her head like 'That's not what I wanted to do at all.'

"In finals, she dusted everybody. She put down her best run of the season, for sure, and probably one of the top runs I've ever seen in the 12-14 girls' field."

McNeill described herself as inherently competitive and feels it will serve her well in the coming seasons as she looks to push the limits and become the best skier she can be. That competitiveness is sometimes overruled by fear, which is the biggest roadblock she'll work through in 2015-16.

"I want to break through my mind that 'I can't do this' because I can, but I don't think I can at the moment," she said. "When I'm doing it, I'm 'Whoa, whoa, whoa, what am I doing?' and I can do it if I try, but sometimes I just get a bit scared because I guess I'm not as ballsy as some of the boys are. But apparently I'm just as good a skier.

"If I could break through that mindset of 'Oh, I can't do this drop, it's too big, I can't see the landing that well' — if I could just push past that, I could do a lot better."

Explaining very few female competitors incorporate tricks into their runs, McNeill is working to find some that work for her that she can use in the future. She noted she's struggling with most of them at this point, but is willing to put in the effort to make them work in her runs.

"It's just more interesting for everyone to watch," she said. "It's not just the same thing. You have a little pizzazz in it."

Foose said McNeill was analyzing the 15 to 18 year old boys and taking notes on the tricks they were doing.

"She's not interested in taking it easy. She's not interested in a safety run. She doesn't want to have success by doing only as much as it takes. She wants to push herself," Foose said. "At Red Mountain she hit a cliff that the 15 to 18-year-old boys were hitting and only one or two of the girls in the 15 to 18 (category). She fell in the finals doing it, but she came down with a huge smile on her face.

"'I would rather do something awesome and fall than ski a boring run,'" he recalled her saying.

McNeill has one more year in the 12 to 14 category next season, and has her eyes set on attending the Freeride Junior World Championships in Grandvalira, Andorra in 2017.

In all, 14 WFC members qualified for the North American championships, the most out of any club, Foose said. Three skiers were unable to attend.

In the 15 to 18 women's category, Carlene Loughlin posted the top second run, moving up from 10th to seventh. Julie Letizia was 12th.

In 15 to 18 men's division, Tom Peiffer was 11th after sitting 33rd after his first run. Jackson Bathgate, meanwhile, posted a "ski movie line" with a 40-foot 360 his first time out, but fell in the finals to place 23rd. Liam Peiffer crashed in the qualifiers and didn't go through to finals.

In the 12 to 14 boys' category, Rhys Higgins placed 13th, Nathan Holm was 14th and Eric Peiffer 15th. Connor Darnbrough and Cole Alexander both fell in qualifying.