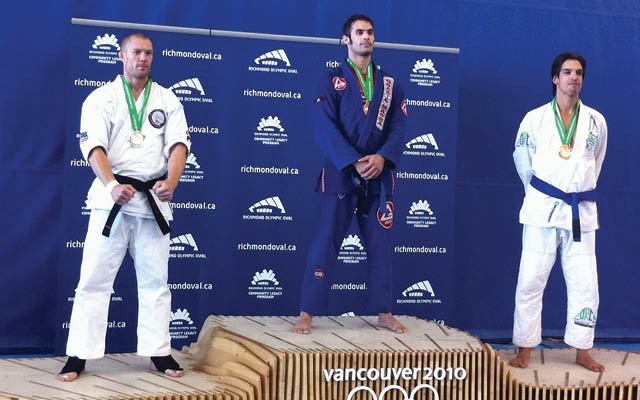 Two Whistler martial artists have some impressive hardware to show off after strong performances at the TAFISA World Martial Arts Games earlier this month.

Competing in jiu-jitsu (grappling/submission), Adam Colpitts topped the podium in his men's 69 to 84-kilogram weight class during the event held Sept. 5 to 7 at the Richmond Olympic Oval. The 34-year-old also went on to claim silver in the absolute competition, which saw the top finishers across all weight classes square off to determine an absolute champion.

Meanwhile, fellow local resident Corey MacKinnon captured bronze in the men's 36 to 45-year-old age group in kickboxing point sparring. Both athletes, who train under Sensei Cole Manson at Whistler's Awesome Arts Academy, had earned the right to join Team Canada at the World Martial Arts Games by posting impressive results at other competitions earlier in the year.

"It was pretty awesome to represent Canada in competition and to do so well was a fantastic feeling, for sure," said Colpitts, who has only been training seriously in jiu-jitsu for a couple of years.

"Super excited about the experience and I feel pretty blessed to come out as well as I did. I kind of had an inclination that it was something that I could accomplish, and I visualized it and made it happen."

Colpitts won all three of his weight-class bouts en route to gold. He defeated American competitor Ti Daly in the championship match, getting Daly to submit to a cross-collar choke.

"I got the takedown right away and got to the dominant position, and essentially got the submission," said Colpitts. He won his first two matches in the absolute class and performed well in the gold-medal bout, scoring a nice takedown, but no points, in a 2-0 defeat.

But to leave the World Martial Arts Games with a gold and silver medal was plenty for Colpitts to be pleased about.

"I started out with the mission to win this competition and I accomplished it. It's great when you set goals and work towards them."

MacKinnon went to Richmond feeling like a medal was within reach, though not in the discipline he ended up taking one from.

"I wanted to take gold in my weapons forms but I screwed up just a little bit... had at least half a point taken off and didn't place at all," he said. "I was pretty angry at myself."

But the 45-year-old responded by winning two of his three kickboxing match-ups, including a tense bronze-medal bout against a fellow Canadian.

"It was a really close match," said MacKinnon. "I was a couple points up, then he got a couple on me, but I just won the bout 3-2."

MacKinnon hadn't competed seriously for a long time until attending the Tiger Balm Internationals back in March, where he earned his place on Team Canada with a two-medal performance.

"It was a good all-around experience, especially for not competing for so long," MacKinnon said of earning a World Martial Arts Games medal. "I met a lot of people from all over the world."

The three-day event welcomed more than 300 athletes from nearly a dozen countries.