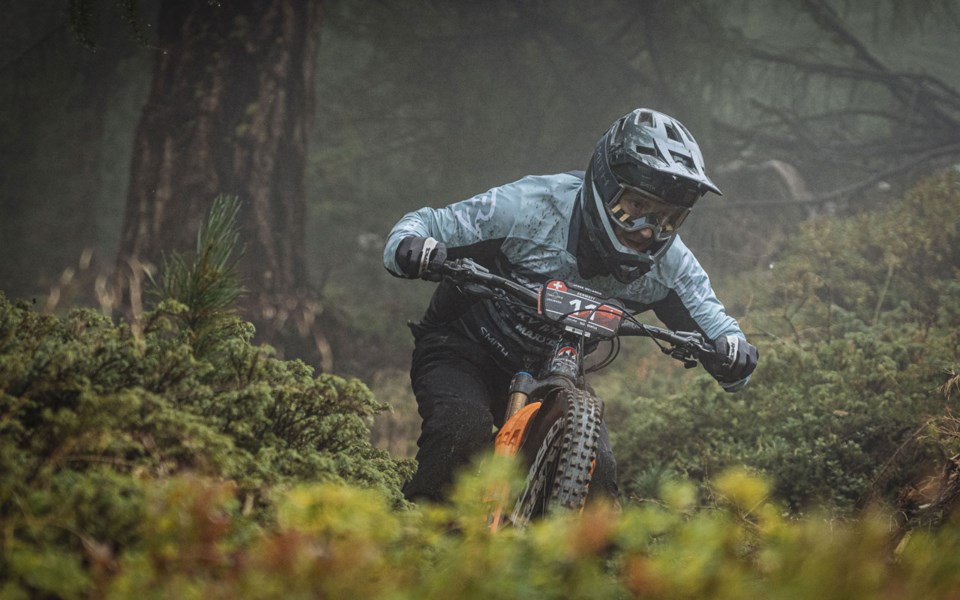 Whistler Enduro World Series rider Jesse Melamed fell off the winning pace in the second of three events on this year’s tour, but he’s within striking distance of the overall title.

After claiming the crown in the season-opening race at Zermatt, Switzerland, Melamed took a seventh-place finish at Pietra Ligure, Italy on Sept. 20.

All told, Melamed finished 39.04 seconds back of winner Adrien Dailly of France, while fellow Frenchman and runner-up Florian Nicolai was 20.58 seconds back, while Australia’s Jack Moir, in third, was 22.64 seconds off the pace.

Melamed yo-yoed throughout the day, taking 26th in Stage 1, winning the second stage, dropping to 35th in Stage 3 before rebounding with showings of eighth and fifth to finish the day.

“Super stoked with my riding honestly, had a blast carving through the wet conditions. Times were a little [all] over the place but can’t complain when you’re racing against the best in the world!” Melamed posted to Instagram after the race.

Melamed sits third overall, behind Theo Galy and Nicolai, both of France. Though Melamed’s 910 points are the most earned over the two Enduro World Series races, the circuit is also counting points accumulated in its qualifier circuit, which benefits both riders ahead of him.

In Italy, Squamish’s Rhys Verner was less than a second outside the top 10, placing 11th, while other Sea to Sky finishers in the men’s race were Squamish’s Remi Gauvin in 32nd and Whistler’s Carter Krasny in 61st.

On the women’s side, Squamish’s Andreane Lanthier Nadeau took sixth, 1:29.1 behind champion Melanie Pugin of France. Isabeau Coudurier (14.21 seconds back) and Morgane Charre (42.05 seconds back) rounded out a French podium sweep. The lone other Sea to Sky rider, Miranda Miller of Squamish, took 20th.

Crankworx set to air next week

Missed Crankworx Whistler last month? The B.C. stop on the Crankworx World Tour may have fallen victim to the COVID-19 pandemic, but the mountain-biking festival is resuming action next week with its stop in Innsbruck, Austria.

Five events in all will be broadcast on Red Bull TV.

Festivities will start with a bang on Thursday, Oct. 1 as the Dual Slalom Innsbruck and RockShox Innsbruck Pump Track Challenge will both run. Oct. 2 will see the CLIF Speed and Style Innsbruck, while the weekend brings the Crankworx Innsbruck Slopestyle on Oct. 3 and the iXS Innsbruck Downhill on Oct. 4.

As well, the Official European Whip-Off Championships will go down on Oct. 3, with highlights broadcast at a later date.

“We are so thrilled to be able to continue the momentum of live racing we started with Summer Series, this time in Europe and on Red Bull TV. With so many of the world’s best athletes flocking to Europe for the fall, we’ll have the opportunity to bring together a stacked field of riders from different disciplines to see some great racing,” Crankworx World Tour managing director Darren Kinnaird said in a release. “We’re confident that, working with our team in Innsbruck, we’ll be able to put together a safe event and an amazing show for our fans around the world.”

To keep up with broadcast times and more information, visit crankworx.com and redbull.com/ca-en/events/crankworx-austria.

Westside Wheel Up a go

The 28th annual Westside Wheel Up will look a little different because of COVID-19, but the long-running mountain bike race is still a go this weekend.

Instead of the traditional race format, registered riders will consult Trailforks to learn which badges they need to obtain. The more badges a rider accumulates, the better the chance of winning a prize.

As group rides are not permitted, participants must only ride with those from their bubble, keep two metres apart from other trail users, avoid congregating at trailheads and parking lots, and ride within their limits.

The entry fee is $10 for WORCA members. Those who are not members can obtain a single-day membership for $15. Each entry includes a beer at Whistler Brewing’s taphouse.