Melamed wins fifth Sea to Sky race in a row 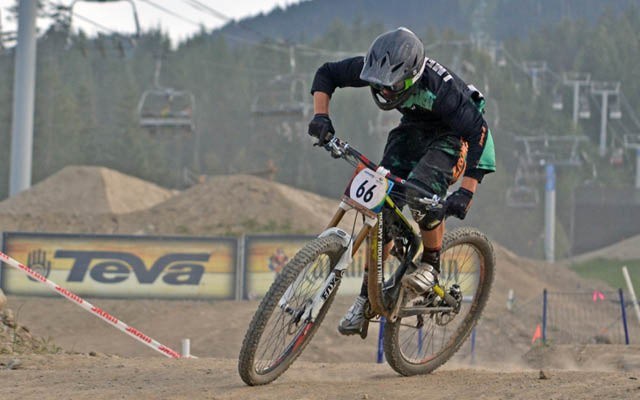 series secured Whistler's Jesse Melamed won his fifth Sea to Sky Enduro Series race in a row on July 5, locking up the season's pro men's title before heading off to Italy for the next round of the Enduro World Series. file Photo

Jesse Melamed heads to the next round of the Enduro World Series knowing that he's got the title for his local circuit back home wrapped up this season.

The Whistler rider captured his fifth victory through five races of the Sea to Sky Enduro Series by claiming top spot in The Mock Turtle, held Saturday, July 5, in Squamish.

Melamed has had more dominant wins on the tour this year — he won Saturday's by less than two seconds over Josh Carlson — but it was enough to secure first place in the pro men's series standings. Nobody will be able to catch Melamed with just one race remaining in the series' first year.

"I knew I had to get a few more points to lock up the overall, as I will be away for the last race," Melamed said in an email from Italy, where's he'll race the fourth round of the Enduro World Series on July 12 and 13.

"I was pretty surprised to come away with the win in the end. I knew I hadn't ridden a perfect race, so I felt guilty winning by so little."

Melamed finished the five stages with a combined time of 18 minutes, 5.19 seconds compared to Carlson's 18:06.93. Davis English (19:04.11) took third place in a battle for the last podium spot, as James Rennie and Jamie Biluk were both within four seconds of English's time.

"I don't consider it a real win, more of a tie that I edged ahead for," said Melamed. "However, I'm super stoked I put up another win to make it five-for-five and really show I've matured."

A Whistler rider also took home the victory in the pro women's class, as Fanny Paquette posted a triumphant time of 25:27.07 for the win. Aja Philp finished as the runner-up, while Squamish's Veronika Voracek placed third.

Pat Foster collected the open men's title at one of the busiest races on the series thus far, recording the best time out of the 85 men entered in the open, junior or master classes at 19:54.04. Jeremy Norris and Adam Price rounded out the top three of the open men's category.

In masters competition, it was Brennan Covey who claimed victory with a time of 20:07.78. Also on the masters podium were Craig Bullen and Louis Phillippe Leonard.

Luke Di Marzo, at 19:57.55, was one of few open-class riders to post a time under 20 minutes, and that put him atop the junior division. Huntington Jasperson and Tristan Sanders were second and third, respectively.

In junior women's competition, Stephanie Denroche was the top rider, reaching the finish with a combined time 10 seconds clear of Emily Johnston.

Pippa Holdom was the first-place finisher in the open women's race, notching a time of 31:36.27 to hold off runner-up Simmone Lyons. Roxanne Minnille finished third.

Yael Greenfield had the second-fastest women's time overall on Saturday (28:14.75), which put her on top of the masters class. Valerie Fraser and Tamsin Mills rounded out the category's top three.

Although Melamed's series title is assured, point totals through The Mock Turtle were not available at press time. The final race of the series takes place in the Whistler Mountain Bike Park on July 26, and is expected to utilize the Top of the World trail.

Visit www.worca.com to register for the series finale, check out www.seatoskyenduro.com for full series details, and head to www.squamishenduro.com to view results from The Mock Turtle.