The GMC Canadian Championships at Nakiska wrapped up on Sunday with Whistler's Mike Janyk defending his national slalom title against a field of increasingly competitive racers.
Apr 2, 2010 8:58 AM By: Andrew Mitchell 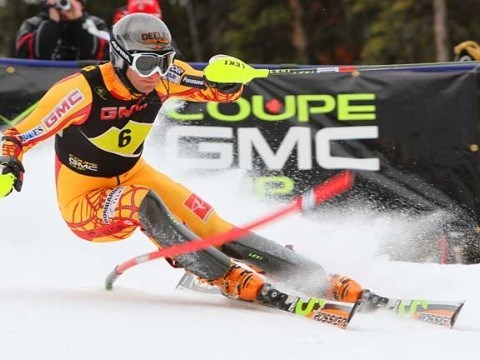 The GMC Canadian Championships at Nakiska wrapped up on Sunday with Whistler's Mike Janyk defending his national slalom title against a field of increasingly competitive racers. It was his second medal of the national championships, after placing third in the men's super combined three days earlier.

Meanwhile sister Britt Janyk added a gold medal in the giant slalom and a super G bronze to the gold she won in the women's downhill at the start of last week.

The women's super G took place on March 24, with Fernie's Emily Brydon taking the gold medal just 0.07 seconds ahead of teammate Shona Rubens. It was Brydon's last chance at the title, after confirming a few weeks earlier that she would be retiring from professional ski racing at the end of the season.

"Today was a landmark day for me," said Brydon. "I wanted to really enjoy it. I knew I could do well but I also knew that the competition would be tough, Britt and Shona are skiing really well and I knew it was a shorter course and would be really tight."

It was Janyk's 13 th career national title. She hasn't trained much giant slalom in recent years as she focused on speed events. Only Nancy Greene has more titles, 17, although super G wasn't an official discipline in Greene's day.

"I am just enjoying competing," said Janyk. "We have some great skiers in Canada and this week has been a lot of fun.

In the slalom Mike Janyk was second after the first run, but posted a solid second run to move up into first by almost half a second. It was Janyk's fourth national title in slalom.

"This is pretty good," he said. "I have to try to keep up with my sister.

"It's always a good way to end the season. You're in Canada, competing against your teammates and the younger guys. It's fun and we really get a chance to enjoy competition that is a little less intense and you can just ski for fun."

But while the event may have been less intense it was every bit as hard as it gets. Only 27 of 85 starters finished the men's race. Among them were Conrad Pridy in 13 th place, Michael Cadman was 17 th and Ford Swette was 23 rd .

Only 34 of 72 starters finished both runs.

Following the nationals, GMC presented four Canadian athletes with the keys to lease vehicles for the year - an incentive the Alpine Canada sponsor has provided for the past eight years.

Canadians qualified for the vehicles by finishing in the top 10 of any discipline or winning a World Cup.

Erik Guay and Manuel Osborne-Paradis both won World Cup events this year and got to keep their vehicles from last year - a GMC Yukon and a GMC Yukon Denali respectively.

Whistler's Mike Janyk got to keep his GMC Acadia or lease another vehicle by virtue of his ninth place in the World Cup slalom standings.

Emily Brydon placed sixth in the downhill and 10 th in the super combined.