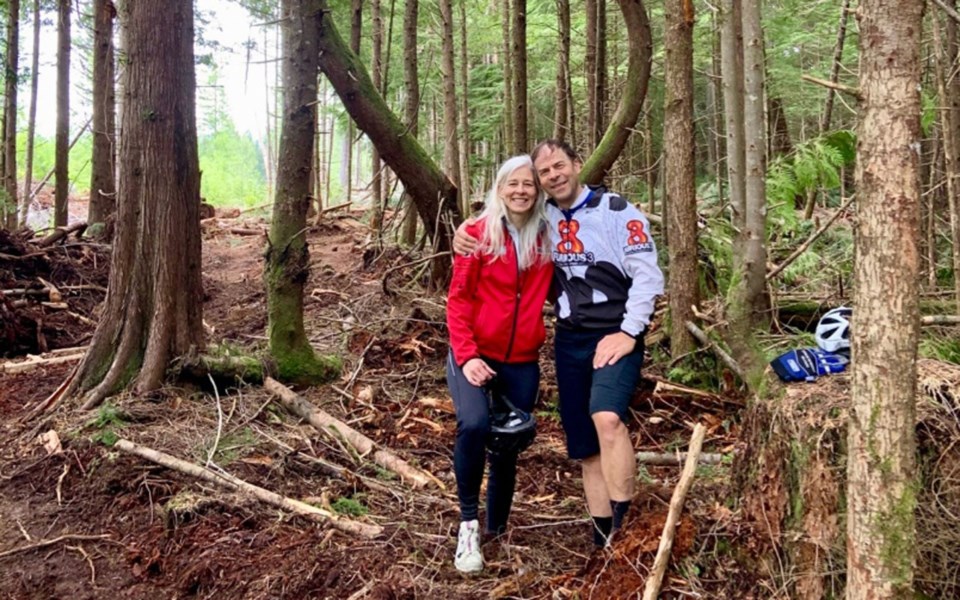 After the great sadness of losing her daughter Mikayla in a mountain biking accident last October, Christine Martin is embracing the dichotomy of tragedy and joy.

A new trail in the Alice Lake – Highlands area built in honour of the national ski-cross racer and 2018 Junior World Champion is helping to provide some happiness through the pain.

Miki's Magic is an 800-metre-long blue trail located northeast of Alice Lake near trails such as Ed's Access and Slippery Salmon.

"For me, it's been really good," said Martin, who anticipates officially installing a metal sign to mark the trail soon. "It's such a beautiful trail. It's such a fun trail. It'll be such a gift to the community. It is so who Mikayla is.

"Mikayla was all about having fun, being outdoors, enjoying sports, enjoying nature. She would love this course."

Martin said it was important to build a trail riders of all ages could enjoy, as her daughter, who grew up in the Whistler Mountain Ski Club, had a strong interest in children, specifically young women, getting involved in sports.

"There's some really steep stuff here in Squamish, and difficult, challenging stuff," she said. "The jump from the really basic to the steep and tricky stuff is quite a jump. This is a good in-between [option].

"It is going to be really fun and accessible to a lot of different skill levels."

Lead builder Ted Tempany of Dream Wizards Events made the trail ride, in many ways, like a ski-cross course.

Tempany shares Martin's skiing background, so he wracked his brain trying to incorporate that. One feature he's proud of is the start ramp giving off a ski-cross course vibe. At the top, there's a start ramp, while each of the corners has rollers, added fellow builder Luke Di Marzo.

"All our corners have rollers in them, so we're trying to get the same lightweight feeling as you would on a ski-cross track," Di Marzo said.

Noting his positive relationships in the local community and with provincial organizations, Tempany credited Sea to Sky recreation officer Alistair McCrone with helping the application receive quick approval so work could start this spring.

As well, Tempany quickly created the general path for the trail, punching through roughly 800 metres of trees, stumps and rocks over the course of two long days, putting in 22 hours total.

"We're getting pretty proficient at doing things well but also doing things fast," he said. "When you don't have huge budgets, you have to find ways of doing things better with less money.

,P>Di Marzo, a former Team Squamish teammate of Martin, worked alongside Tempany in a smaller shaping machine as they've contributed long hours to the project.

"Ted, every morning, says 'You ready to be cross-eyed by this evening?'" said Di Marzo, who won the open junior team division at the 2013 Crud 2 Mud contest as he biked and Martin skied. "He loves it. He says he wouldn't want to be doing anything else."

Di Marzo said Martin's friends and family came out to help pick rocks and shape the trail, though passers-by have been quick to lend a hand.

"Basically everyone who's come past us has stopped, picked up a rake or shovel or started picking rocks without even being asked," he said.

Di Marzo noted that Paralympic sit-skier Alex Cairns has helped out over the course of several days, "dragging himself down into the corners" to sit down and pick rocks.

The trail is open for riding, with some work remaining to connect it into Rob's Corners to properly incorporate it into the network.

For more updates on the trail, keep an eye on Dream Wizards' Instagram page @dreamwizards.

Tempany said the trail building process has allowed him to get to know the Martin family better, and he's appreciated the opportunity.

"I really admire Christine and [husband] James' strength throughout all of this. It's easy to see where Mikayla got all her positive energy from and her eagerness to help all the young kids in town," he said.