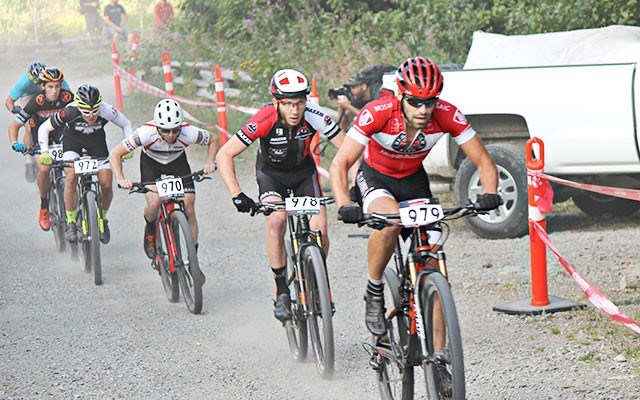 Quinn Moberg was almost a little late in his surge.

After Victoria's Cody Canning, the provincial criterium champion, had led for two-and-a-half laps as riders bore down in the Whistler Village finish line in the Fat Tire Crit, Moberg made his move. Craig Richey ended up in third place in the first pro race of this year's Crankworx festival on Aug. 7.

"Coming up to the line hurt a little, but that extra motivation to win kind of dulls the pain," he said. "(With) the five guys we rode with, it was how I imagined it would play out."

Moberg estimated he let Canning hold the advantage until there was about 30 metres left, at which point he put on the afterburners.

"I left it pretty late," he said. "My family was watching here. That extra motivation from them made the difference."

Canning, meanwhile, did just everything he could to put himself in the ultimate position for a victory, but credited Moberg with finding the unprotected spot to go in and win.

"I took the lead with about two-and-a-half laps to go and I thought if I could basically go full gas down every straight, it's going to be hard to come around," he said. "Quinn had a perfect position and luckily he saved a bit of gas and he was able to come around me there."

In the women's race, Jean Ann Berkenpas of Valemount defended her title from 2014, cruising to a significant win over Whistler's Chloe Cross. Cross' coach, Chrissy de Vall rounded out the podium.

Berkenpas said the win last year was a much tighter one, but in some ways, may have actually been a bit easier.

"In a way, it was maybe a bit more painful because you don't have the distraction of tactics with another person," Berkenpas reasoned. "Right at the end, I didn't know how big my gap was and I started to lose focus a bit, but it's still a gap that can be shrunk really quickly.

"Just trying to stay focused when it's starting to get painful was probably the hardest."

Berkenpas explained she powered through the slightly more challenging sections of the course a bit better than her opponents, and it ultimately made the difference. She also won the race's three preems (two for $50 and another for $100) en route to the win, her third overall in the event.

"It's a short race, so you have to capitalize on any advantage that you have," she said. "I came out of that loose gravel section with a little gap and I just tried to stretch that out. It worked out for me."

Both winners are cross-country riders at heart. Moberg explained there could be some cross-over from the specialty.

"Cross-country is a pretty explosive event. It is an endurance event, but it's full of explosive movements and that's what this is like," he said. "I don't feel like I'm a specialist in this. Everyone else is foreign for this, too."

Each champion received $500 for the win.