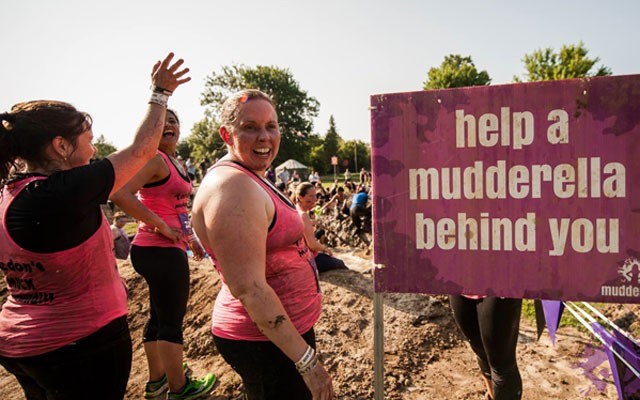 a mudderella story Mudderella events made their Canadian debut this year, including the pictured event in Toronto. The first Whistler event is coming on Saturday. Photo submitted

After hosting Tough Mudder for the fourth time at Whistler Olympic Park earlier this summer, the resort is bringing that flagship's younger cousin Mudderella to the heart of the community this Saturday (Sept. 26).

Mudderella director of operations Nick Cogger said crews have been on Blackcomb Mountain for the past three weeks preparing the course for a race that, while shorter and a little less treacherous than the notorious Tough Mudder, will still challenge the roughly 10,000 expected participants. In an interview on Tuesday (Sept. 22), Cogger said the registration numbers were nearing their cap, though the event was not officially sold out online at press time.

"It's huge," Cogger said. "This is about as big as we can go because of the sizing of the trails here.

"It's going to be possibly one of the top-three largest Mudderella events in North America this season. I can say that with confidence, top-three, possibly top-two."

The event is primarily aimed at women, with about 95 per cent of those taking part being female. Men must be invited as a guest of a woman participating in the challenge.

Cogger noted the Festivals, Events and Animation (FE&A) funding from the Resort Municipality of Whistler was used to bring in Mudderella's signature obstacle called Hat Trick.

"It's a three-part obstacle. It involves, on the front side, it's a very steep rope-ladder climb up to an elevated platform. From the platform there's a 35-foot fly at a 40-degree angle, which slides into a pool, which you then have to swim across and then you climb out on the other side," he said. "We were able to place it right in the base area so it's extremely spectator-friendly and it is the one that everybody looks forward to."

Mudderella is in many ways a gateway endeavour to longer events like Tough Mudder, and Cogger, Tough Mudder's local event director, said there are similar philosophies around both.

"It's a shorter course. We're talking about eight kilometres, versus Tough Mudder, which is a half-marathon, typically," he said. "It's a different set of obstacles completely that are designed, engineered and built up by our women's team at Mudderella.

"It's really a female-focused product but effectively, it has the same core values of having a good day out with your friends and trying something new and pushing your limits a little bit."

Base II, in particular, will serve as a hub of activity for the event with an entire Mudderella Village in place and a spot for spectators to have a view of the athletes and obstacles.

"As a spectator, from Base II, within a 15 to 20 minute walk you're able to see most of our feature obstacles," he said.

Spectators can take the Excalibur Gondola up the mountain at a cost of $5 a person while entrance into the event is $10. Tickets are available at www.mudderella.com.

Cogger said since the registration numbers have been encouraging, the likelihood of the event coming back to the Sea to Sky corridor for a return engagement in future years is high, especially with the rugged beauty and toughness Blackcomb Mountain provides.

"You couldn't ask for a better landscape in which to do it," he said. "The landscape is very challenging. We're talking about a very steep mountain and a tough course, for sure.

"It'll be a workout, definitely."