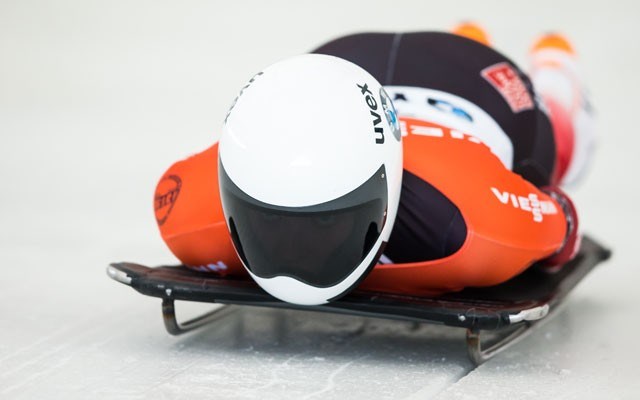 QUITE A YEAR Skeleton racer Madison Charney of Brooks, Alta. has had a wild ride since winning the national title in November. Photo by Dave Holland/Canadian Sport Institute

The season is only a couple months old, but Madison Charney has already had to adjust her expectations on numerous occasions.

The 20-year-old skeleton racer from Brooks, Alta. posted a surprise victory at the BCS Skeleton Race Championships in Calgary on Nov. 1, besting Lanette Prediger by 0.04 seconds.

From there, it's been a whirlwind for Charney, who will take part in the Intercontinental Cup stop at Whistler Sliding Centre on Jan. 16 and 17.

Charney has fond memories of Whistler Sliding Centre — her first win came there and she's generally been successful on the track. And in addition to having a sled that adapts well to quicker tracks, Charney said a speed-demon mentality helps as well.

"We hit almost 140 km/h here on a good run, and I think that scares a lot of people away," she said. "Even if I end up upside down out of a corner in a training run, I still get back on and don't look back.

The national title, and another victory at the North America's Cup event in Calgary on Nov. 21 helped elevate Charney to the World Cup level. She made her debut in Lake Placid, N.Y. on Dec. 12, finishing 19th in a 21-racer field. She rebounded the following week on her home track in Calgary, placing 10th on a night where teammate Elisabeth Vathje won her first World Cup race in her second time out.

Even with the improvement, she was switched off the Bobsleigh Canada Skeleton World Cup team in favour of Jane Channell, who trains at Whistler Sliding Centre. Channell, ranked sixth on the Intercontinental Cup circuit, placed 11th at the Altenberg, Germany stop on Jan. 9.

In a season that began with earning a spot on the Intercontinental Cup team being a major success, within weeks, it was a bit of a disappointment. Still, she's striving to keep this season's hills and valleys in perspective.

"I was only looking to make it to Intercontinental this year, so World Cup is kind of an added bonus," she said.

She views her brief elevation to the World Cup level as a learning experience, especially after her first race was on the challenging Lake Placid track, which she described as an almost-counterintuitive combination of speed and technicality.

"It's definitely a step up from what I've been racing before," she said. "It's all the girls that have gone to the (Olympic) Games once or twice.

"I learned a lot about myself racing, about the way my competitors race. It was great."

It's a year in which Charney has already proved to not only herself but to the nation that hard work pays off. Significant snowfall during the national championship race made it a slog for competitors — though she generally trains on snowy days when several others might not. That dedication ended up working out.

"It was a tough race. We had a bunch of snow that wasn't planned," she said. "A lot of us had to make quick decisions with equipment choices.

Given her experience with less-than-ideal conditions, Charney knew how to approach the choppy Calgary ice to ride off with the gold.

"You have to be a lot quieter on your sled when the ice gets harder. It's easy to be skiddy and that's horrible for a skeleton run," she explained. "You want your runners to slide straight downhill the whole time so you aren't cutting ice and losing time.

"It's a bit of a mind game, too, when it snows and the ice gets harder because you have to be really calm and really focused, but I managed to pull that off."

Charney said entrenching herself on the World Cup squad is a goal for next year, although there is a chance she could be recalled later this season but things would have to break just right. She added she's hoping for success for all her Canadian teammates, as Own the Podium funding for skeleton is just $20,000 for the 2014-15 season after the governing body received over $3.5 million in each of the past two quadrennials.

"There is a slim chance I could be moved up. It depends how the girls on the World Cup do and how I do here and what the coaches feel would be a good option," she said. "We did lose a bunch of funding last year, so now we're looking for great results on all the tours and hopefully getting some of that funding back."

Like many elite national-level athletes, Charney is competing with an eye on the 2018 Winter Olympic Games in Pyeongchang, South Korea. She's hoping to get a better sense of the tracks over in Europe to improve her skill set — especially reading tracks, which would be helpful in cases where she only gets eight training runs before a competition.

"I can take knowledge from my home track in Calgary and coming out to Whistler lots," she said. "But it's a completely new thing going down a track for the first time. You know what to expect, but you don't know exactly what to expect.

"It's nice to be able to pull from two very different tracks — Calgary, a pusher's and glider's track, and Whistler, a fast driver's track."

Brandon, Man.'s Cassie Hawrysh and Calgary's Jaclyn LaBerge are the other two sliders on the women's Intercontinental Cup team, while local Patrick Rooney and Paul Fraser and Evan Neufeldt, both of Saskatoon, head up the men's teams.