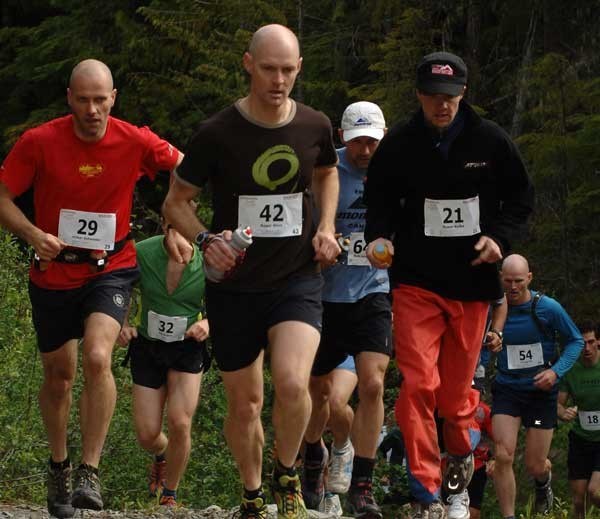 Start attack. The chase pack follows the lead runners up the logging roads on the Comfortably Numb on Sunday. Photo by Scott Brammer.

This 2007 Comfortably Numb Trail Run came close to selling out this year, with 191 people registering for the 200 start positions.

Only 153 runners actually started the race, with excuses that ranged from training injuries to the poor weather, and one runner required a lift out by helicopter after injuring her ankle.

Despite the wet and slippery conditions, Vancouver’s Adam Campbell set a new record time for the 25 km course of one hour, 58 minutes and 45 seconds — besting the previous record of 2:01:09 set by Stefan Fairweather in 2004, the first year of the race. The course did change slightly this year, but if anything it was slightly longer with the addition of Tommy Moore to the Hydro Cut road.

Whistler’s Jason Shorter was second in the race and the top local, trailing Campbell by just 11 seconds with a time of 1:58:56.

This was Shorter’s first time running Comfortably Numb, and first trail race since he entered the Grouse Grind several years ago. Running is just something he does casually in the spring and fall to stay in shape for mountain biking.

“I typically run in the shoulder seasons when I can’t get on my bike or skate skis, and even then I usually only run for about an hour — and even that’s a long run for me,” said Shorter.

To train for the race Shorter ran Comfortably Numb twice to familiarize himself with the trail and see what it was like to run for more than two hours. His best training time was around 2:10, but he felt strong on the day of the race and let Campbell set the pace.

“It was so close and we had some great battles, but the guy who won definitely won the day,” said Shorter. “I think we were pretty equal on the uphills and I had him on the downhills, but on the flat rolling sections I was doing everything I could to stay with him, and pace with him.

“I found out after the race that the guy is training for an uphill marathon in Switzerland, and trains with (triathlete) Simon Whitfield. When I heard that I was not too upset (about) placing second. I’m basically still a cyclist, but I think I could enjoy runs like that.”

Shorter says there is a good chance he’ll be back next year, but has no immediate plans to enter more trail runs.

Brad Cunningham and J.F. Robert also broke the course record, placing third and fourth with times of 1:59:21 and 1:59:41 respectively. After they finished there was a 12 minute gap to the rest the field. All four runners were in the Men’s Under 40 category.

Four Seasons General Manager Scott Taber was also running Comfortably Numb for the first time, placing seventh overall and third in the Men’s 40 to 49 race with a time of 2:13:51. Taber is a veteran runner with seven marathons to his credit, and ran the Boston Marathon in April.

“It was a great day,” he said. “I had a few falls but overall I really enjoyed it. I thought (the organizers) did a great job with the course. Just thinking about having marshals on a course like that blows me away. A typical race volunteer might have to go to the corner of a golf course, but some people hiked and biked in all that way to help out.”

Taber is now planning to the do the 25 km Rubble Creek Classic in September, followed by the Victoria Marathon in October.

“Trail running is completely different than road running, you have to be so much more focused on your running, but both are hard. Trail running is a great way to diversify for a runner like myself, and it’s great training.”

To get ready for the run Taber has been going out to the Tuesday night running group at Escape Route, and did both Comfortably Numb training runs with Duncan Munro of Whistler Running Experience. He had a general idea what to expect, but was still surprised by how difficult the trail was.

On the women’s side, Vernon-based ultra runner Tracy Garneau was first across the line in 2:14:27, well short of the record time of 2:05:25 set by Whistler’s Kristina Rody in 2004.

“I was really happy,” said Schieven. “I hadn’t done a lot of runs up to that point and I wasn’t sure how the day would go, but once you get into the race you forget about how much you trained or didn’t train and just go for it. The course really was in good condition and the weather was perfect for running, so I had a really good race.

“I really enjoyed the downhill this year, looking for the right line down and making up a few spots.”

This was Schieven’s third time in Comfortably Numb, and she plans to be back again next year.

“I really enjoy it. It’s just long enough that it’s a challenge to work towards, but it’s not so long that it’s daunting. I like the distance, the time of year, and the organizers do such a great job,” she said. “I found myself running with two guys from Kelowna who came with a group of 20 people to do the race this year. They heard that if they do one race this year it should be Comfortably Numb, and said the whole thing was amazing. It’s neat watching this race grow by word of mouth, beyond the Sea to Sky.”

This was the fourth year for the Comfortably Numb Trail Run, which starts at Wedgemount parking lot and finishes at Spruce Grove in Lost Lake Park. The route doesn’t follow the entire Comfortably Numb trail, instead cutting in about a kilometre past the start in order to spread out the field. From that point the trail includes approximately 22 km of moderately technical mountain bike trail, with close to 1,000 metres of vertical climbing from the start to the end of the trail. From there runners have about a 2km run to the finish line at Spruce Grove Park.

Every year the organizers have contributed the proceeds of the race back to trail maintenance, and will present a cheque for $1,000 to the Whistler Off-Road Cycling Association for the work.

Comfortably Numb is also the first race of the Sea 2 Sky Trail Running Series. Future events include the Squamish Thunder on July 14, the STORMY in Squamish on Aug. 11, Loop the Lakes on Sept. 9, the Rubble Creek Classic on Sept. 23, and Lumpy’s Epic on Oct. 13. For more information and registration, visit www.s2srun.com.