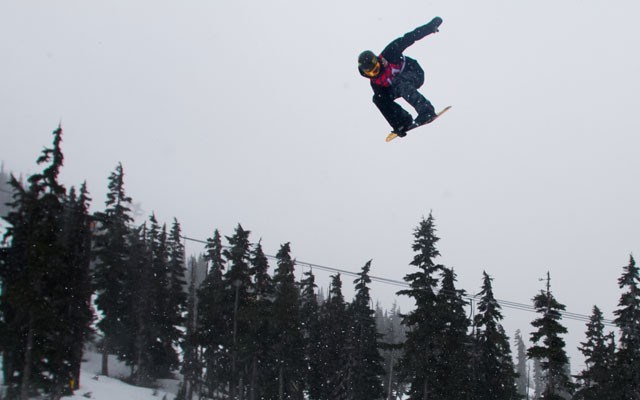 take that for a nichol Tyler Nicholson captured the men's event at the 18th annual Showcase Showdown on March 15. Photo by Rich Glass/Showcase shop

Waiting an extra day didn't keep the boarders away.

Though the 18th annual Showcase Showdown was delayed 24 hours after gusty wind conditions on March 14, all 34 registered participants stuck around and showed off their best in the big air the following day.

The pro results were wildly different, as the top men's scores were just hairs apart, ending up with Tyler Nicholson scoring the $10,000 first-place prize by just six points over Darcy Sharpe. On the women's side, there was no doubt as to the winner, with Brooke Voigt cruising to victory. The Fort McMurray, Alta. product turned up a score of 405 with runner-up Alex Duckworth posting a 292.

"The wind was pretty gusty," he said. "Yesterday (Saturday), with all that new snow that came in, and then the temperatures warmed up. It was so slow and really, really windy. Today was just a better option."

With judges looking for one style run and one technical run, Nicholson opted for a switch back 1260 and a front cork 360 as his secret weapons.

Calling Sharpe his best friend, Nicholson said the Whistler resident got the best of him at their last big air event, so it was nice to reverse the roles this time around.

"It's fun to beat him," he said. "Every day, just boarding, we push each other so much.

Nicholson explained this is his last major event of the year, though he will complete a movie with Celtek before the season is through. He'll head into the summer with an eye on a strong performance at next season's X Games, where he placed 10th in slopestyle in January.

Voigt, meanwhile, explained with the windy, snowy and icy conditions, she had to change her approach as there was "not much room for error."

"It wasn't the highest level of riding, but considering the weather, I think all the girls are pretty happy to be out of there in one piece," she said. "You try to be a little safer in your strategizing.

"I just kept it mellow. I did tricks I'd be sure I was able to land."

Voigt's major tricks that landed her the women's title were the backside 360 mute and the backside 180 melon.

The top five men's competitors won money and prizes. After Nicholson (571) and Sharpe (565), the other best scores were from Ryan Manning (551), Ryan Paterson (535) and Craig Gouweloos (508). The Showdown was also a qualifier for the Monster Energy Shred Show on April 18. As Nicholson and Sharpe were already in, third-place finisher Manning was invited to attend.

On the women's side, the top three competitors won prizes. In the four-person field, Brooklyn Thomson's 261 was good enough for the final prize.

Showcase Snowboards manager and buyer Deanne Gale said all competitors who signed up to take part Saturday stuck around town when the event was postponed.

"An executive decision was made to keep the riders happy and move the event to today (Sunday)," Gale said. "The vibe was awesome up on the mountain."

Gale said the riding throughout the competition was impressive, and credited all involved with helping the event go off.