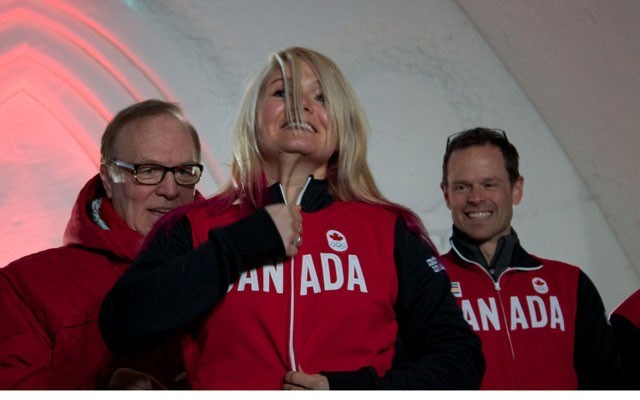 NICOLL FOR YOUR VOTES Halfpipe snowboarder Mercedes Nicoll hopes to get Canadians active through a Twitter showdown running through Nov. 15. Photo courtesy of Canada Snowboard

The three-time Olympic snowboarder is looking to raise funds for the Whistler Blackcomb Foundation as part of a Twitter challenge that began Nov. 1 and will run until Nov. 15.

RBC is organizing the challenge in the lead-up to its annual Sports Day in Canada on Nov. 21.

The five participating athletes will post five challenges over the course of the 15 days with three winners from each challenge being announced.

To enter, post a photo of yourself being active using Nicoll's handle @MercedesNicoll and the hashtag #RBCsportsday. The bank will also donate to the winning Olympians' sports organization of choice.

Nicoll explained in an email she chose the Whistler Blackcomb Foundation because it supports several other clubs dear to her heart like the Whistler Skating Club, Whistler Valley Snowboard Club and Canadian Snowboard Federation.

"I'm asking the community for support because I have chosen for my possible winnings to go toward the Whistler Blackcomb Foundation, as they support kids in sports," she noted.

The BC Bike Race reported in a release on Nov. 3 that the 2016 edition of the race sold out in fewer than five days.

"It only took 4.5 days this year to sell out but it took years to get to that 'International bucket list status.' As we head into our 10th year we are happier than ever and extremely excited to share our singletrack adventure with another new 600 racers from around the world," the release said.

Next year's 10-year milestone will begin in North Vancouver on July 6 before wrapping in Whistler a week later on July 13.

Arc'teryx Women's Ski Camps are returning for another season.

This year, they're looking to help women in the Sea to Sky corridor in more ways than one.

Whistler Blackcomb announced in a release on Oct. 28 that the camps had teamed up with Howe Sound Women's Centre (HSWC) to help give the organization a boost.

As part of the two-day camps, which run select weekends from December through April, there will be a silent auction of Arc'teryx gear, with all the proceeds going to the centre.