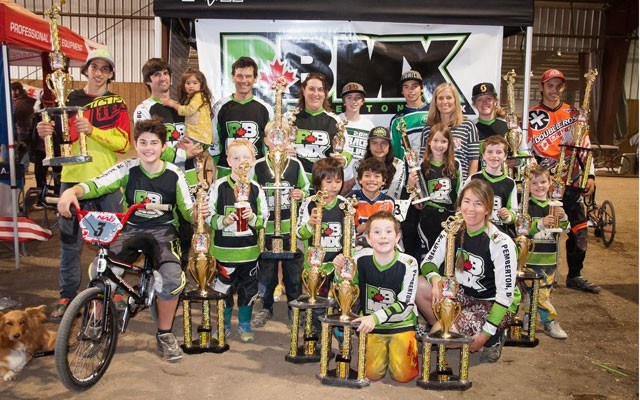 GREAT FINISH Members of the Pemberton BMX program show off their haul from the BMX Canada Grand Nationals in Chilliwack earlier this month. Photo submitted

Pemberton BMX has gone family-friendly to grow in leaps and bounds.

By encouraging parents and siblings of riders to get involved, the club has grown its membership base, culminating the season with its largest batch of riders in the club's histroy attending a race at the BMX Canada Grand Nationals in Chilliwack from Oct. 2 to 4.

"It's not just kids. We have moms, dads and their kids all racing," said head coach Steve Petrie, who noted Turner Montgomery also provided instruction this season. "We have families where everyone in the family races."

The club brought 31 riders to the event, a major jump from in past years. Petrie estimated numbers tended to cap out at about 20 riders in previous seasons.

"That's quite a bit more than we've had in the past," Petrie said. "This was our largest number of riders at a Nationals event."

Even three years ago at the same event, he said only six to eight riders from Pemberton represented at the season-capping race.

Competitors were not only attending, but they were making the most of their opportunities. In all, Pemberton BMX brought home 27 medals including six first-place finishes.

"We had a lot of riders doing well. Most riders were making their mains and we had a lot of the riders in the intermediate classes doing well," he said. "They saved their best races of the season for the last race of the year, so that was kind of cool."

Petrie noted Grand Nationals races set riders' rankings for the next season, so participants go to a little extra trouble to show up. He estimated there were between 750 and 800 riders from all over the country who came out and provided some extra competition to the Pembertonians.

"It's typically the biggest race of the season," said Petrie, who maintained his third-place ranking. "They typically get riders from all over Canada showing up to that one for the final race of the year so they can get their national rankings.

"In general, for the size of our town, we have a really strong team."