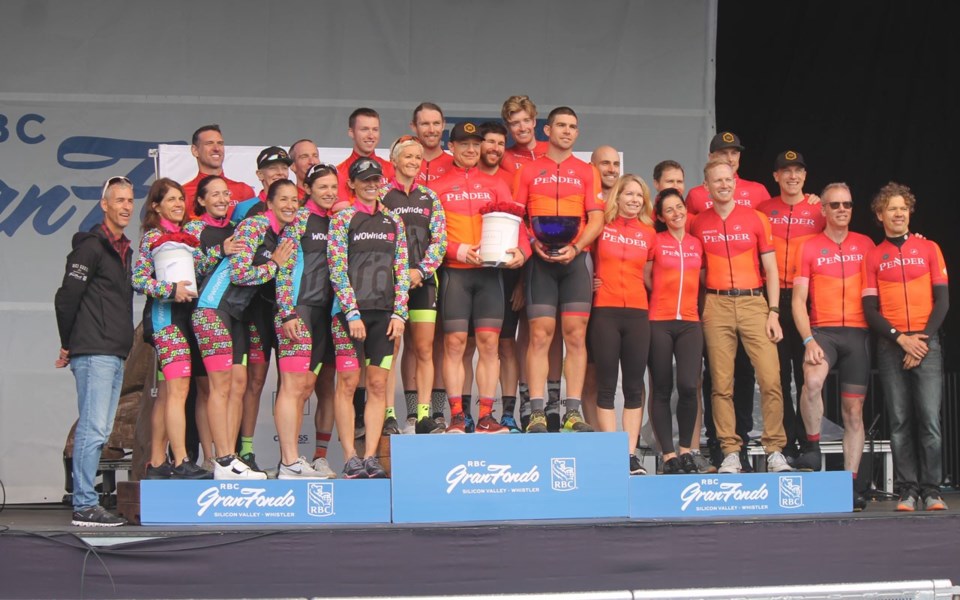 Pender Racing p/b Bicicletta had the saints and some skill on its side en route to winning the men's division of the brand-new St. Regis Cup at the RBC GranFondo Whistler on Saturday.

In his first race with the team, Alex Fraser-Maraun posted the fastest time of the day in three hours, 14 minutes and 31 seconds (3:14:31), helping Pender Racing to the victory. In the team event averaging a squad's five-fastest times, Pender nicked The A-Team by 13 seconds and Jukebox Cycling by over three minutes.

The St. Regis Cup is the GranFondo's premier event for the next couple of years, replacing the individual Giro race with professional riders, as the RBC GranFondo Whistler will host the UCI Gran Fondo World Championships in September 2020.

In the individual battle, Fraser-Maraun bested The A-Team's Alexander Murison by 67 seconds on the 122-kilometre course from Stanley Park to Whistler Village.

"It was a real pleasure to race with these guys today," he said. "We didn't want to have such a long day. (Teammate and third-place finisher) Nigel (Kinney) was a little bit crazy and attacked 20 kilometres in and we just carried it through to the end. It was a fun day, but a hard one."

Fraser-Maraun, a member of Hewdog Racing, said he wasn't planning to strike when he did, but when another rider got aggressive, he had to kick it up a notch.

"My teammate was bonking with about 12 km to go, at which point one of our competitors attacked. I managed to counterattack and stay away with about six km to go," said Fraser-Maraun, who has no plans to race with the team again, but hopes to suit up with them in the future.

While Fraser-Maraun said the conditions weren't ideal, he was driven to find a way to help the team and secure the victory.

"It was a wet day, a cold day, but it's lovely to be up in beautiful Whistler," he said. "(It was toughest) towards the end, when you started to get hungry and you're cold and there's a lot of climbing to go."

Pender Racing also took the mixed title while WOWrideTaG scored the win in the women's category, bolstered by top women's finisher Esta Bovill, who bested runner-up Sharon Armstrong by over 15 minutes and third-place finisher and teammate Grace Menning by over 16 minutes.

"I'm just really proud of everyone who steps forward and does it for us," she said. "Whether it's their first Fondo or they're a seasoned pro, it's a real success for everyone and a really big accomplishment."

McDonald said, especially when conquering the tough, primarily uphill course, the team placed a strong emphasis on lifting one another.

"We just tried to stick together, support each other and stick together," she said. "We've got some really strong riders on our team and we just really wanted to push forward and do the best we could and just have fun doing it as well."

McDonald said though the wet and chilly conditions were challenging, it was an improvement on 2017, where teeth-chattering cold affected participants.

She also was thrilled for the chance to get out on the road with the roughly 200 St. Regis Cup participants instead of the crush of thousands of riders as part of the general GranFondo.

"It was a real treat being on the Sea to Sky Highway with not as many riders in front," she said. "We really enjoyed the experience.

"It's a great event and I think it put Whistler in a great light for the UCI event that's coming up in a couple of years."