Perfect day for a Shuffle

Turnout lower, but organizers already planning for next year
Feb 24, 2006 2:02 AM By: Andrew Mitchell 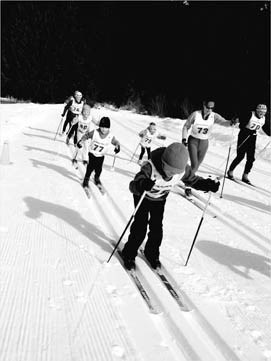 Lost Lake Shuffle Sunday, February 19 "almost everyone came away with a prize." Photo by Andrew Mitchell

A field of over 60 skinny skiers came out on Sunday to race in the fifth annual Lost Lake Shuffle – a turnout on par with last year’s frigid race, but fewer skiers than organizers hoped to have for the fifth year of the race.

Conditions and weather were perfect for the event, and everyone who participated had a great afternoon. The two year solo categories were popular, but fewer racers tackled the four hour solo event – probably because the Shuffle fell between the Feb. 12 Coast Cup and the Feb. 26 Whistler Loppet.

"Most people need more than a week to recover from a four hour enduro," said organizer Chris Waller of the Cross Country Connection.

Waller says the event lost some momentum and racers this year when they were forced to delay the race from early January to mid-February as a result of the lack of snow in the valley at the beginning of the year.

Having a smaller field did have its advantages – almost everyone came away with a prize, and there was more than enough food and refreshments to go around.

Only three men did the full four hour enduro, seeing how many laps of a 3.5 km course they could complete before the clock ran out.

Jean-Yves Sauriol of the Hollyburn Nordics was a machine, posting laps in the 12 minute range early in the day, and keeping a strong pace to the finish. He ended his day with 25 laps, or covered more than 94.5 km in the four hours – thereby averaging almost 24 km/h on his skate skis.

"It was good. The first two and a half hours I felt great but after that I started watching the time a little more, started getting hungry."

Sauriol made sure to eat something every two laps towards the end of the race, and spent the last hour watching the laps count down.

Sauriol had completed the 50 km Cariboo Marathon event the previous week. Although he had never competed it the Shuffle before he said he was getting a lot of skiing in this year and felt he was up for the challenge.

At the finish line he knew he was the winner, but lost count of the number of laps he completed earlier in the race. Even he was surprised to find out he had skied over 90 km.

Sauriol does not consider himself to be a competitive racer – "I have a day job," he said – although he always works as hard as he can once a race is underway. In the Cariboo Marathon he finished eighth against some of the top skiers in the province.

In second place was Feng Chen, who completed 26 laps of the course for a total of 91 km in four hours.

"That was tough," he said. "We haven’t had snow for all that long, and nothing last season, so it was hard to get enough skiing in to prepare for something like this."

Robilliard does do the Thursday night Loonie Race series hosted by the Whistler Nordics, which he says is the best thing to happen to cross country racing in town.

"It’s really taken off, and brought a sense of community and excitement to the sport," he said. "People who have never owned skis before are signing up. I think when those people get a little more confident, events like the Shuffle are going to take off as well."

Robilliard, who competes in marathons, triathlons and other distance events, says his low point came after the three hour mark.

"After three hours it gets hard," he said. "I do this as base work for marathons, and I can say any exercise more than three hours and your body will start to get tired. But there were a lot of spectators cheering you on, and a lot of energy at the finish area, and it was great when all the families joined in. It was a nice boost at the end."

Three women also did the four hour event. Terri Meyer was the top racer, finishing 21 laps for a total of 73.5 km. Her lowest part was about three and a half hours into the race, and a little later when she discovered she was faster than she thought.

"(Near the end) I was racing to get another lap in before the finish, and I raced it as though it was my last lap. So I was surprised, I guess you could say, when I got to the finish and they told me ‘one more lap to go’," she said.

Meyer had never raced in the Shuffle before, but says she felt fit enough this year to take part. "I’d done some loppets and other little things, but I didn’t see the point of doing four hours until I made up my mind to do it this year."

Tara Calbert was second among women in the four hour category, followed by Cory Shannon. Both completed 20 laps, or 70 km.

In the two hour category William Letham motored through the course to finish with an amazing 15 laps (52.5 km), averaging over 26 km/h.

Arlene Shieven was the top woman with 13 laps, followed by Lesley Clements with 12 and Brenda Davison with 11.

The only co-ed team in the teams of three category was Hobblin and Wobblin with Mike Gihooly, Aurelie Germann and Matteo Abel finishing 27 laps.

There was also one junior team in the running from the Whistler Nordics, which made 10 laps in the two hours.