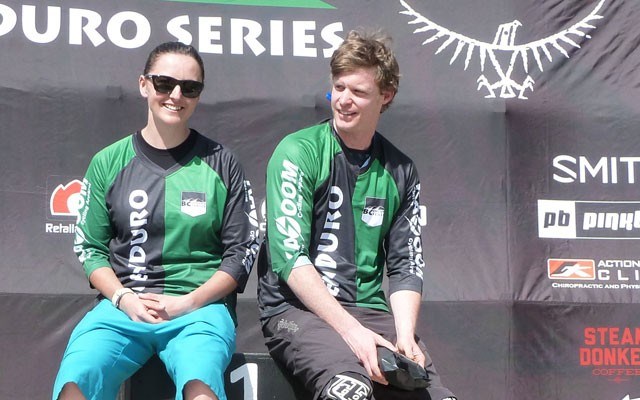 new jersey Leonie Picton (left) modelled the BC Enduro leader's jersey alongside James Rennie after winning the first race of the season on May 3. photo submitted

Leonie Picton isn't just surviving on enduro courses in her return from injury.

Whistler's Arbutus Routes rider dominated the open women's field en route to capturing the Sunshine Coast Enduro race on May 3 in the opening BC Enduro event of the season.

Picton acknowledged she didn't like her chances heading into the race, and though she was solid, noted she caught a break when some top competitors suffered bad luck.

"I was going into the race not even thinking a win would be possible, which probably was a good thing, and made me more calm instead of a nervous wreck," she chuckled. "The two people who I thought would do well ended up with mechanical issues.

Picton, who has struggled with various ailments since 2011, posted the top time in four of five stages to score an overall time of 26 minutes and 30 seconds (26:30). Second-place rider Laura Battista was 1:46 back, while Ruby Morrissey placed third with a time of 28:56. Whistler's Georgia Astle was hot on Picton's trail through four stages, even winning stage 3, but her bike failed her in the final stage as she posted only the 16th best time in the fifth and final section to place fourth overall, three seconds off the podium behind Morrissey. Fellow Whistlerite Katrina Strand was five seconds behind Astle and also suffered mechanical issues.

Other podium performances for Whistlerites came from Conrad Murdoch, who won silver in the junior U19 men's division while Ruben Guibert and Carter Krasny were deadlocked for bronze. As well, Neve Abraham, won the junior U15 men's race, and Max Edwards, who was second behind Abraham.

In the men's pro/elite division, Matthew Clough placed fifth while Quentin Emeriau was fourth in the men's open division.

Picton was strong on the course even though she lacked familiarity with it. Her prime approach was to take it fairly conservatively, seeking to ride smoothly and minimize mistakes, as it was easy to ride off-course.

"I'd only pre-ridden the course the day before, so I felt like I didn't know where I was going," she said. "My aim for each of the stages was to look as far ahead as I could."

Stage 4 was the most difficult, Picton explained, but she said she had fun with some of the blind drop-offs and fast sections.

"It wasn't the longest stage, but it was definitely the most challenging," she said. "It was very steep with a lot of slippery roots, a lot of wet lines. Although the ground looked like it was pretty good, as soon as you hit a corner, you could potentially be on your ass. It was 50/50 whether you were going to come out of the corner upright or not."

Picton's next event is the second BC Enduro race of the season in North Vancouver on Sunday (May 10).

"I haven't been on my trail bike much so I didn't have huge expectations. I was happy with how I rode," she said. "I was doing mostly downhilling, so I definitely had a lack of fitness. I felt like I had a ton of fun on my bike, so I think that helped."

Being one of the only BC Enduro races Astle expects to race this year — her main focus as a downhill rider conflicts with many of the other events — she felt some disappointment at just missing the podium.

Astle's stage 3 win was one of the flatter sections, she explained, and it was one she felt she could handle well right from practice, using pedal strokes and "pumping through it."

"That one was probably my cleanest one staying-on-my-bike-wise," she said. "I was just able to pull it off."

Astle agreed the second-to-last stage was challenging, but welcome, as it was most like what she's used to riding in Whistler as opposed to typical coast riding, where the trails tend to be soft and never dry.

"Those corners just remind me a lot of home," she said.

The hometown feeling didn't last long, though, as her bike turned on her late and she had to cross the finish line on foot.

"In Stage 5, my chain guide broke off, and then it caused my chain to pull my derailleur in," she said. "I couldn't even roll my bike, so I ended up running it while carrying it, which is pretty crazy."

Next up for Astle is the GO Enduro later this month, which will come on the heels of a family vacation, so she'll be riding the course blind. She's also put her name in for two Enduro World Series races in Spain and Italy later this year. Astle's next downhill race is the provincial championships right here in Whistler next month.

She feels her downhill background benefits her enduro career and vice versa.

"I think they complement each other," she said. "When you're on a downhill bike, it almost feels like you're cheating compared to enduro just because you have all the extra suspension.

"When you get on a little bike, you still push the same amount and it makes you that much faster."

Full results are available at www.bcenduro.com.