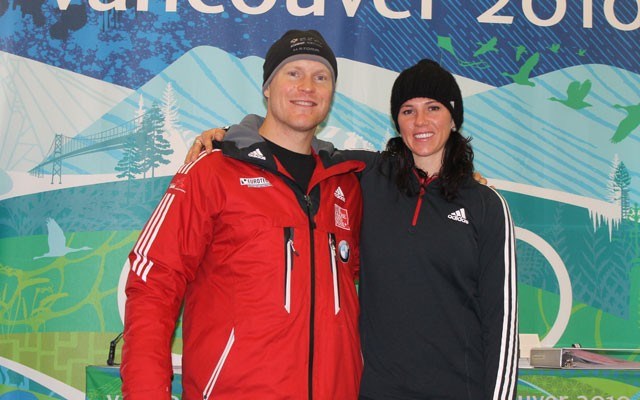 PASSING ON KNOWLEDGE Olympic medallists Lyndon Rush and Helen Upperton are shown at the Whistler Sliding Centre on Dec. 12. The pair was back in Whistler coaching young athletes as part of the WinSport Academy program. Photo BY DAN FALLOON

The Calgarian was the 75th winner of the award, and the first bobsledder to receive the honour, when the announcement was made on Dec. 11. Among the finalists was Whistler ski cross racer Marielle Thompson.

Canada is riding high on the international stage after Humphries and brakeman Heather Moyse won Olympic gold medals here in Whistler in 2010 before repeating at the Olympics in Sochi in February. Additionally, the duo is the two-time defending World Cup champion.

But the sport's future is in doubt, as even in stronghold countries like Germany and Switzerland, entries into their national championships are in steep decline. In an attempt to give the sport a shot in the arm here in Canada, two other 2010 medallists — two-man silver winner Helen Upperton and four-man bronze winner Lyndon Rush — have been recruited to coach Calgary-based WinSport Academy's bobsleigh program, which is in its first season of operation.

Upperton explained with Bobsleigh Canada Skeleton facing a financial crunch, especially immediately leading up to the Olympics, the younger, developing athletes are sometimes left in a lurch trying to get to where they need to be.

"These athletes are falling through the cracks in a sport where it's already hard enough to have people participating," she said. "The purpose of the WinSport Academy programs is to fill in the gap wherever that gap may be in the sport.

"In bobsleigh, it falls between the provincial organizations and the national team."

Upperton said the program is a partnership between WinSport, Bobsleigh Canada Skeleton, Own the Podium, the Canadian Sport Institute and the Government of Alberta.

Upperton and Rush were in Whistler with the program's nine athletes, aged 20 to 27, training at the Whistler Sliding Centre last week. Though based in Calgary, the athletes will also train in Lake Placid, N.Y. and Park City, Utah this season. A return engagement at the WSC in February is also planned.

"It's a four-year program to feed them up to the World Cup team. Year 1 is run volume in North America, predominantly in Calgary and Whistler," she said. "Year 2 is North America and Europe for run volume, and Year 3 is starting to get them into some competition, so maybe some World Cup races here and there."

The training is rigorous as Bobsleigh Canada Skeleton upped its standards for pushing, sprinting and lifting for all athletes.

Upperton noted some team members have already found some success this season, earning medals on the North American Cup circuit. She feels even better things are to come.

"Sliding in Whistler on this track that has this reputation, their confidence is just going up and up," she said. "We're going to go back to Calgary for this World Cup and they're going to be 'We just got back from Whistler.'"

Though there aren't any British Columbian athletes on the team yet, Upperton hopes the BC Bobsleigh and Skeleton Association's plank sled program at the track will help flush out some young stars from the Sea to Sky and beyond. The program's four pilots hail from Alberta, Ontario, and the Maritimes.

Rush said he came to Whistler at least once a year after medalling, but explained his first time back as a coach has been a jolt. He was one of the first to ride the track, and estimates he has among the most, if not the most, runs on it. As a result of being one of the pioneers, Rush said he doesn't have a written explanation of how to approach a run like he does for all the other tracks he rode, and now must find a way to pass along the vast knowledge of it to his charges.

"Most tracks you go to, the coach gives you a program and you try to execute the program, and then we make small tweaks," he said. "Whistler — we started sliding here and no one had been down the track. There was no program.

"We developed our own program as athletes and never really put it down, never really had to explain it to anyone else. Now I have to explain the way I drove to these guys."