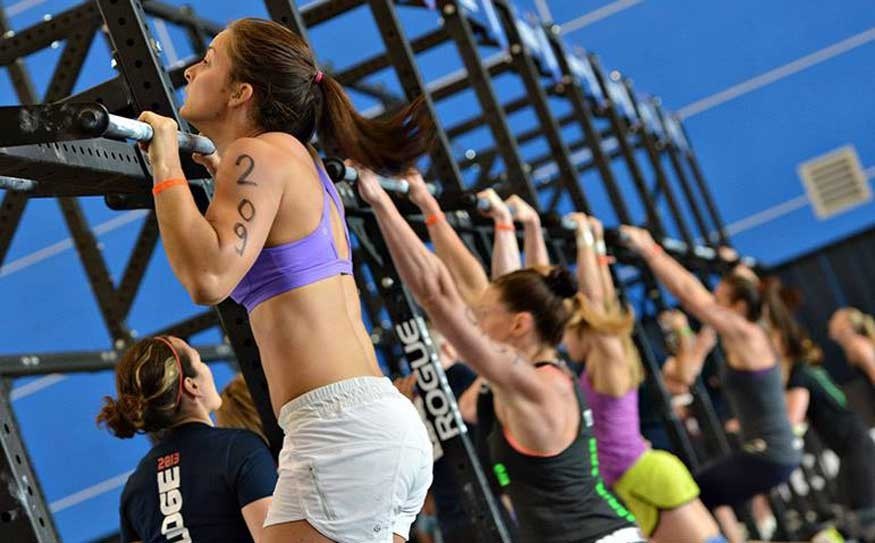 While a lot of people may hit the gym to train for sports, Crossfit has taken it a step further and turned the gym into a sport of its own, stacking exercises into blocks that test strength, agility, endurance, speed and all-around toughness, and leave muscles burning and lungs gasping for air.

This past weekend, two Whistler athletes took part in Crossfit Regionals for Western Canada in Vancouver. They were part of a group of 50 men and 50 women who qualified in a five-week/five-challenge Crossfit Open competition where athletes were tested in their home gyms.

Jayde Quilty, 26, said there were 1,500 women taking part in the Open competition, and she came into the regionals ranked ninth overall. She didn't know what to expect at her first competition, but managed to finish a solid sixth after winning one of the seven events and placing second in two other challenges over the course of three days.

"I was hoping to do that well, but I wasn't expecting it," she said on Monday.

"Definitely the deadlift/box jump stage, the one I won, was the most exciting for me. To come off that last box jump first, it was unbelievable... I felt really good about it going into the event, but I didn't know what the other girls were going to bring to the table."

Quilty almost won the first event as well, but was called back after a judge ruled that she didn't finish her final pull-up completely. She ran back to the station to do one more, and then got passed on her way to the finish line.

Each of the seven challenges had an upper time limit, but the goal was to get through the list of exercises as quickly as possible.

The first event had competitors rowing 1,000 metres on a rowing machine, doing 50 thrusters (squats with an unloaded, 45 pound bar) and 30 pull-ups. Event two was an overhead squat complex where athletes do three squats at each station, with weights getting progressively heavier as you move along.

There was only a two-minute break after that event and then competitors had to jump into the third event. That was Quilty's worst event of the competition. Competitors had to do 30 burpee muscle-ups, which are like conventional burpees only instead of jumping up into the air you have to grab a pair of overhead rings and pull yourself up to your waist.

The fourth and fifth events were on the second day. Event number four required bouncing a 14-pound medicine ball off a target painted on the wall 100 times, followed by 100 chest-to-bar pull-ups, 100 one-legged squats alternating legs and 100 one-arm dumbbell snatches using a 50-pound weight. Event five had athletes alternating between 205-pound deadlifts and box jumps on a two-foot high box, doing sets of 21, 15 and nine.

The last day opened with 100 double-unders (skipping rope where the rope passes under your feet twice in a single jump), followed by 50 handstand pushups against the wall, 40 toes-to-the-bar lifts, 30 to shoulder-to-overhead lifts with a 100-pound axel (weights don't rotate like normal weights), followed by a 90-foot walking lunge with the axel held in front. The very last event was a circuit, with athletes climbing a 15-foot rope twice, sprinting 100 feet, doing four squat-cleans of 135 pounds and another 100-foot sprint back to the ropes for the next round. Competitors had to finish four rounds in under 10 minutes.

Quilty said she made up her mind to compete about nine months ago, and started training in earnest soon after. For the last six months she's been training for five or six days a week, one to four hours per day.

"I put a lot of time in, and personally my body is pretty high maintenance so I was getting in as much therapy as I was training," she said. "It was pretty consuming for the last six to eight months of my life. But it's what I wanted and it really paid off for me, performance-wise, at regionals — knowing the time and effort and perseverance, and the struggle I went through, prepared me properly for what I had to face and what I had to compete against.

"I was kind of a dark horse coming in, nobody knew who I was. To do so well against more experienced athletes was amazing."

Quilty has only been doing Crossfit for a year-and-a-half and worked as a judge at the event in 2012. That's when she realized that she would like to return the following year as an athlete. "I told myself, next year I'm going to be the one being judged," she said. "It's just crazy — 12 months of focus wrapped up in three days."

Rather than taking a break, Quilty said her results at regionals have motivated her to try and qualify again next year with the goal of finishing first or second overall. Only the top two athletes from a regional competition qualify for the Crossfit Games, which have taken place every year since 2007, and take place from July 22 to 28 this year.

"I hope to be a real contender next year and to mentally and physically prepare myself by taking the next 12 months to train hard and focus on my weaknesses," she said. "After getting my toes wet in the regionals I'm hooked."

The other member of Crossfit Whistler to take part this year was Stuart Ray, 33, who originally planned to enter the team category but decided to compete in the individual event when the club's numbers fell short. He was also competing for the first time, and placed 30th overall in a category that included a lot of experienced athletes.

Crossfit Whistler owner and coach Jordan Glasser said he was proud of Quilty and Ray, and for having the loudest cheering section at regionals .

"All of the biggest clubs in the Lower Mainland were there, but so many people came down to support Jayde and Stuart and we were the loudest group by far — every time they stepped onto the floor the crowd went nuts," said Glasser. "The announcers were joking about it by the end. There was a real team spirit."