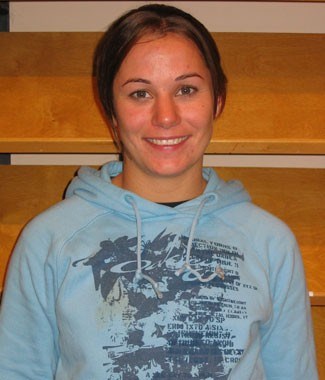 A few big snowfalls and cold spells have passed through the Sea to Sky corridor, and winter has finally started for Whistler. However, the Canadian Snowboard Team has had plenty of snow time already. World Cup points have been awarded and Olympic selection season is in full swing. Everyone on the team is excited to get down to the serious fun of riding.

The summer training camps were a huge success. Tom Hutchinson, the halfpipe coach, held a two month long training session for the senior and developing riders on Blackcomb. The snowboard cross team, led this year by a new coach, Rene Brunner of Austria, also had a 10 day camp on Horstman Glacier. The snowboard cross team then went to Chile early for preparations for the World Cup in September.

Greg Salmon, the race coach, took his team to Chile as well for a month of quality time on winter snow before their big season started.

Halfpipe rider Crispin Lipscomb and big air specialist Neil Connelly got extra riding in on top of the summer season by going south to New Zealand. From what I hear the New Zealand halfpipes were great and many other countries were down there riding. Maybe next year….

September was huge for the snowboard cross team. After 10 days of training and attending local races at Valle Nevado, a ski resort one hour east and eighty switchbacks up from Santiago, we drove south for a few days break before the season opening World Cup.

Pichilemu, a little fishing town south-west of Santiago, was the perfect place to get a little surfing done and fill up on questionable seafood. I had no idea giant steamed barnacles were such a delicacy!

We went back to Santiago to pick up some more athletes at the airport before returning to Valle Nevado. Originally there were supposed to be three events, two snowboard crosses and one halfpipe, but the halfpipe was cancelled due to lack of snow. To be more accurate, there was no snow at all in the pipe.

The snowboard cross course held up nicely despite the incredibly warm weather. I managed to win the time trials in the first race but buggered up my knee in the process and had to sit put for the rest of the week.

Tom Velisek of Vernon won the time trials in the first race as well, but Drew Neilson, also from Vernon, took home gold in the finals. Not only did he have reason to celebrate his win in the first race and his fourth place finish in the second race, but also because his wife Amy just gave birth to a baby boy days before the event!

October proved to be a little less fruitful for us. The racers were working their butts off in Europe training and racing on early season snow. Jasey Jay Anderson took home bronze in a parallel slalom at an indoor event in Holland! Who would have thought? Isn’t snowboarding supposed to be all about being in the mountains?

The halfpipe team did some indoor training also. They were working on their flips and spins at a gymnastic and diving facility just outside of Montreal. Both diving and trampoline work are great ways to create air awareness to take tricks to the snow.

Unfortunately the lack of on-snow training the team had in the fall hit hard in the first World Cup in Switzerland. Nobody, Canadian guys or girls, made the finals in Saas Fee.

Despite disappointing results from the halfpipe event, the snowboard cross men raced as well at Saas Fee and managed to fare much better. Jasey ended up fourth and Drew was sixth.

Drew is holding the lead position in the snowboard World Cup standings, with France’s Xavier Delerue right behind him. They are great friends but at the same time they’re arch rivals. It will be neck and neck all the way to the finals in March to see who will be awarded the crystal globe for the overall tour winner. Xavier took the honours last year so I’m sure Drew will be on the hunt to change that.

November has come and gone pretty quickly, with no major events. I spent the month at the gym and with Marilyn at Creekside Physio, but also managed to meet up with the rest of the halfpipe team in Mammoth for a week. They were already down there when I joined in. Dominique Vallee, Neil Connelly, Justin Lamoureux, and his lady Joanna drove the official CSF vehicle, the Honda Element, down from Vancouver. The rest of the team travelled in the luxury of a plane all the way to Reno, where they then rented vans and drove the remaining three hours to meet the Element crew.

Sunny skies and a great early season park with a superpipe were ready when the team arrived. We even reaped the rewards of a phenomenal powder day on the 28 th of November!

Most of the halfpipe teams from other countries were down in Mammoth training as well. It seems to be the place to be for early season riding in North America.

We had a great camp, except for Sarah Conrad from Nova Scotia, who had an accident. She got in a fight with the pipe, but the pipe won hands down. Sarah fractured her humerus and underwent three hours of surgery to get it repaired. By the end of the camp she had already regained a lot of mobility and will be back on snow in no time.

The FIS World Championships are coming up quickly in January, right here in Whistler. Each discipline has four Canadian starts for each sex.

With a powerhouse men’s snowboard cross team of five people the upcoming World Cups in Austria this month are going to be tightly fought by Canadians. Nothing less than a top four result will be the standard to ensure a start in Whistler.

The men’s halfpipe team is in the same boat. Performance at the Grand Prix at Breckenridge is integral to locking in points.

But even with all the hoopla of points and standings and quotas, snowboarding still comes down to deep powder, sunny days, and riding with friends.