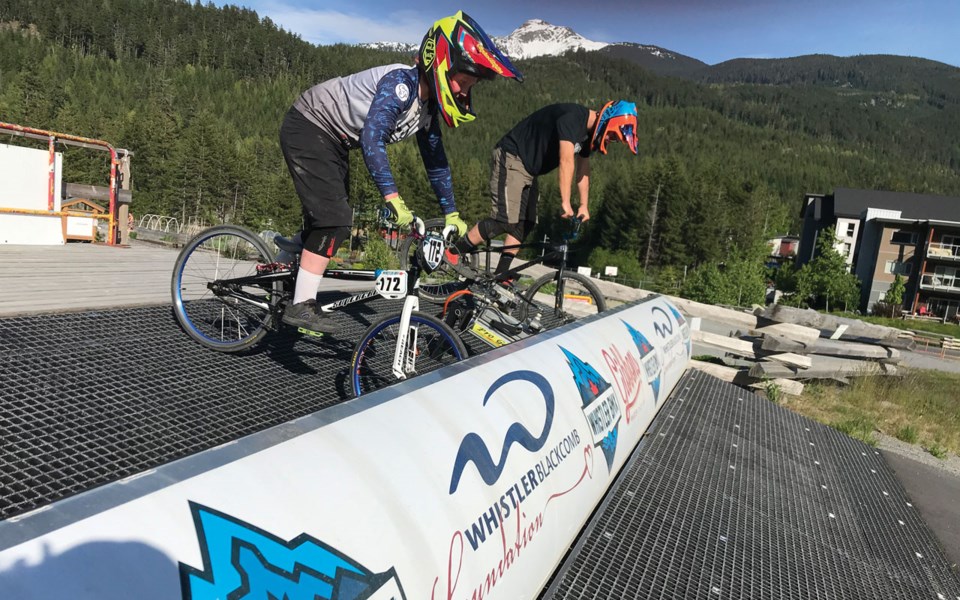 AT THE GATES Whistler BMX is starting to hold gate practices as it resumes operations. PHOTO COURTESY OF WHISTLER BMX

AS WHISTLER STARTS  to come back from COVID-19-related shutdowns, things look a little bit different, and recreational sports are no exception.

Even so, coming back with some compromises is a superior option to shuttering for the summer, according to Whistler Slo Pitch Association (WSPA) convenor Alison Jenkins.

“To me, it’s really important to get the league going,” she said. “It’s something that people really value as part of their summer fun. Particularly given that many people have felt somewhat isolated over the last few weeks with the physical distancing, I think it’s important to get recreational sport up and going.

“I think that social interaction is really, really important for people’s wellbeing and mental health.”

Working with the Resort Municipality of Whistler (RMOW) to establish return-to-play protocols for the past month, Jenkins isn’t entirely sure what games are going to look like when exhibition play starts up June 29, with the regular season kicking off the following week. After receiving RMOW feedback, the league planned to submit a new draft plan on June 22.

“The main thing the RMOW is concerned about is the high-touch surfaces and how do we stop contamination?” she said.

Among the proposed changes are: each player would need their own batting helmet; balls will be switched out depending on which team is fielding, with teams sanitizing those balls while it is batting; and tagging would not be allowed. To allow for the latter rule, each base would have the exact same rules, with players being allowed to run through each base, like at first, and there being a “commitment line,” like at home, to determine whether a runner is safe or out.

Teams are allowed to share bats, but must sanitize them often during games.

As teams and umpires adapt to the new normal, Jenkins and other league directors will attend games and ensure players are following protocols.

“At the same time, we can’t be there all of the time babysitting teams. What we would say is team captains have a responsibility to ensure that their team is abiding by the rules,” she said.

Jenkins is expecting fewer teams than the usual 60, in large part due to fewer residents living in town this year. She added that there has been some interest from teams in Squamish due to uncertainty surrounding the timeline of when their local league will be allowed to resume.

As such, there will be five divisions rather than the usual six, with game nights being Sunday through Thursday. As well, teams will likely play two games against each other back to back rather than facing two separate squads a night.

Teams looking to register should visit whistlerslopitch.com/ for more information, while individuals seeking a team should post in facebook.com/whistlerslopitchassc. Since the season will be shorter, fees are $900 per team, down from the early-bird rate of $1,300 and the regular rate of $1,600.

The Whistler BMX track, meanwhile, is open to the public after opening in late May.

Secretary Tina Symko said though riders are welcome to use the park free of charge outside of official club practices and events, it is not monitored and safety is the user’s onus.

Symko said the club is taking guidance from BMX Canada, which has cancelled all provincial and national level races, while local tracks also called off the regional Sea to Sky Series.

However, Symko noted that Whistler BMX in-house races tend to only draw 20 or so riders, so while there are no plans yet, it might be possible to hold some local contests without exceeding the 50-person cap set by the provincial health officer. Should there be racing later this summer, the club would require pre-registration and allow only one parent on site.

“I don’t think we’re ready to go there yet. I think we’re going to start with some weekly gate practices,” she said, noting those will start June 30 with online pre-registration required.

To this point, the club has held one gate practice. While some kids have been eager to jump into the gates like normal, volunteers have been sure to limit the numbers each round to ensure proper distancing.

“The way our gate works, there’s a natural space between those who ride the track anyway, so you’re looking at at least 30 seconds in between.”

At the lone gate practice held so far, there was some star power in attendance as Squamish’s Teigen Pascual, the world’s second-ranked rider in her age category, made the trip north.

“She was super stoked to come up and do some gates. It was awesome,” Symko said. “All the little kids are just, ‘Oh my God.’

“You have two kids in the gate at a time with social distancing, so a four-year-old fresh on the track can ride beside her.”

Also in the Pemberton area, for those enjoying a little more kick on their two-wheeler, the Green River Motocross Park is open for the season, weather permitting.

The track opened for the season with a reservation system via Facebook Messenger (facebook.com/PembertonMx/) on June 6, said track president Kevin LaBatte. A maximum of 30 riders will be allowed in the park at a time, with 20 on track. At press time, spectators were not permitted.

While the start of the season was delayed, the track came back in great shape as a club member lent some machinery to the park to allow it to complete work on the track.

“The most significant [change] is the amount of dirt that we have been able to pull back onto the track from the ditches and surrounding areas of the track,” LaBatte said.