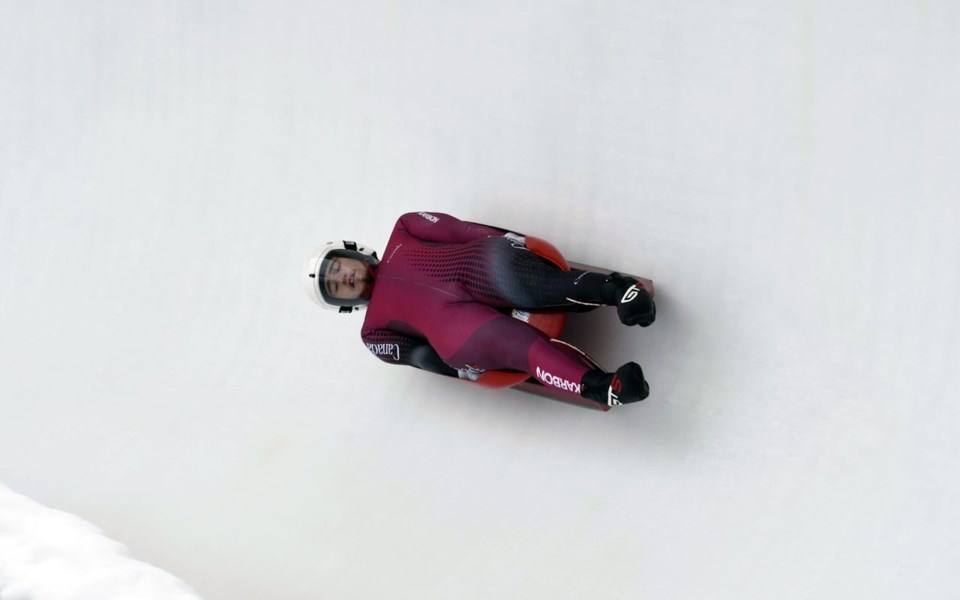 In recovery Garrett Reid is progressing after a devastating crash at Whistler Sliding Centre in November.

On Nov. 16, 2019, luger Garrett Reid was taking his final training runs on his home track at the Whistler Sliding Centre before he and his teammates were to head to Europe for the Junior World Cup season.

It was shaping up to be a big year for the 16-year-old, who had been nominated to Canada's Youth Olympic Games team and was eager for his second season travelling internationally to do the sport he loves.

Instead of jetsetting and competing, Reid has been stuck in a Vancouver hospital room after crashing on one of those runs, Luge Canada revealed last week, noting the Reid family had until then requested privacy in order to focus their efforts on their son.

In an interview with Pique on March 5, Reid's mother Leesa said he is doing "surprisingly well." She said he is in rehab, recently got back on a regular diet, is moving his limbs and, though he is not fully out of his coma, has some degree of consciousness. Leesa said doctors initially expected Garrett to be in an induced coma until at least May or June and likely would not be released from the hospital for two years, but he has blown past those early prognostications.

"He's definitely exceeded all expectations for recovery and they're no longer telling us what they expect," she said. "He just keeps doing stuff that they didn't think he'd be doing for six months or at all."

Leesa was onsite the day of the accident and said it looked innocent enough, describing it as "garden variety." However, it soon became apparent that something was wrong and Leesa credits the sliding centre's track crew for its quick response.

"He was non-responsive, non-breathing," she said. "[The track crew members] were on the scene in easily under a minute.

"Everything they did was a perfect response, as far as I can tell. They couldn't have done more."

From the track, Garrett was taken to the Whistler Health Care Centre, which sought to make arrangements to bring him to Vancouver via air ambulance. Foggy conditions made helicopter travel unsafe, so he was driven instead.

"He was taken down to Vancouver and it was touch-and-go for about three weeks," Leesa said.

Garrett was in an induced coma for three weeks, and remained completely unconscious for roughly three weeks after, at which point he was transferred to the trauma ward from the intensive care unit.

What has baffled Leesa and her family is how a crash that didn't seem like it should be overly serious resulted in the trauma that it did. She said nothing seemed to be wrong with the track or its equipment, and wonders if Garrett's helmet failed to protect him.

"It wasn't a crash that should have resulted in probably even a concussion, let alone a brain injury," she said. "It's a crash I've seen a lot of times and most people continue on to the finish.

"Garrett isn't an out-of-control slider. He doesn't crash a ton.

"It was very difficult to understand how what happened resulted in a major injury."

Whistler Sport Legacies president and CEO Roger Soane has reviewed video footage of the incident, observing that it was a run that went wrong.

"At some points around Corner 13, he started to get offline. As he went down the track, by the time he reached Corner 15, he was severely out of line and that's where we believe the accident happened," he said. "It's just one of those things in these sports where if you make an error, it can be quite costly."

Luge Canada high performance manager Sam Edney said that the organization and Whistler Sport Legacies are funding a biomechanics study through the University of Ottawa to determine if Garrett's helmet was indeed the culprit, as none of the other obvious answers seem to fit.

"That's what's making us all scratch our heads in a sense," he said. "It wasn't an awful crash that I think a lot of people think of. It was a simple, large impact. What we're missing from the footage is just what happened at the moment that there was head trauma."

Soane added that there was a thorough inspection of the course after Garrett's injury occurred, and training resumed only after the relevant sports organizations gave the all clear.

"Whenever there's an incident on the track, we do have a track protocol where our safety officer would do a check of the track," he said. "After this specific accident, we actually suspended sliding for the rest of the day. We had our track crew inspect the track, and we had the Canadian Luge Association inspect the track, to make sure that there wasn't anything that we felt could have caused this accident.

"We got the all clear from all the sliding sports. They were happy and content to start training again."

Edney, meanwhile, said that in addition to the shock of what happened to Garrett, there was also the disappointment of seeing his athletic progression halted so suddenly.

"It's a tough one because we obviously had high hopes for Garrett. He was developing really strongly," he said. "He had set his heights pretty high for what he wanted to achieve and we were watching him get to that point and it was really exciting.

With the remaining team members heading off to Austria the day after the crash and Garrett's status in such flux, Leesa said the team was not initially informed of his condition.

Once they were told, however, Edney said Canadian Sport Institute Calgary mental performance lead Frank van den Berg and psychologist Lauren McBride of UBC Counselling Services were brought in to help the athletes cope with the situation.

"The team was pretty hurt at first and concerned for Garrett but I also know that they banded together right away. That was something that really was a bright spot to see," Edney said, adding the team dedicated its season to Garrett and is keeping him in their thoughts. "They're following his progress and his updates and they're always thinking of him."

As difficult as the situation has been, Edney said the athletes have handled it as best they can, especially considering their youth.

"We're talking about 16-year-olds, and the maturity and the level of professionalism that they had towards what they do daily [was impressive]," he said. "We took it into our hands to make sure that all resources were available for every athlete after an incident like this.

"We did do some mental consultant performance work with a sport psychologist and a trained clinical psychologist. They spent a couple sessions with the team and I think that really helped our group."

While the first several weeks were stressful and filled with uncertainty, Leesa said the family has started to get back to normal.

Leesa, husband Ken and eldest son Parker were all at the hospital for the first five weeks, at which point Parker felt comfortable returning to work after being informed that Garrett was expected to live. Parker, who most recently was a mono-bobsleigh athlete, had stepped back from the sport prior to the accident to focus on completing an apprenticeship.

"He's getting some school done, getting that under his belt, and he may or may not go back to [bobsleigh]," Leesa said.

Leesa said the family kept Garrett's condition quiet in the months after his injury, especially as they didn't want to draw comparisons to Georgian luger Nodar Kumaritashvili, who died during a training run in advance of the 2010 Winter Olympic Games. However, with the silence around Garrett's situation leading to rumours that he had passed away, Leesa felt it was time to publicly set the record straight.

Close friends brought them cooked meals in the early going, while friends, teammates and sport representatives have been by to send their best wishes as they've heard the news.

While Garrett is making quick progress, there is no timeline for when he will be released from the hospital. Given his trajectory so far, Leesa hopes to bring him home soon, but is also aware that his progression could slow or change.

"As the season wraps up here in the next couple weeks, it's something we'll revisit and we'll debrief the whole process. We'll look at the crash again and try to continue to look at ways so that something like this is not happening," Edney said.