Riders crash with hotelier at Crankworx 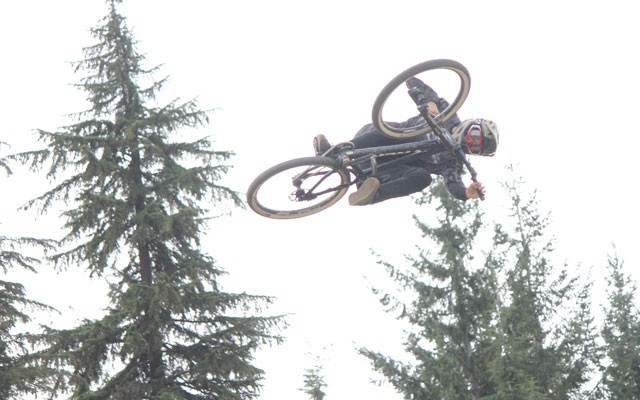 When you're riding slopestyle and lose your landing spot, things don't often end well — but the story was different for a pair of athletes at Crankworx Whistler.

During the event, Utah riders Reed Boggs and Ethan Nell had accommodations fall through and were scuffling to find a place to rest their heads. Boggs, for example, ended up sleeping on a mattress pad in a friend's van in a parking lot during their first three days in town.

After talking with fellow rider and Whistler local Trish Bromley about the new Pangea Pod Hotel, Boggs reached out only to find out it is still under construction and expected to open next year.

However, owner Russell Kling and his family opened his Benchlands home to the two riders for the rest of the festival.

"He had open arms and let me stay in his guest suite in his actual home," Boggs said. "It was the best of both worlds. I could meet Russell from the new hotel that's opening and have a nice place to stay. It was the perfect location for everything; all my races were close and they were the best living quarters we could get — way better than any hotel."

Kling said his house is no stranger to guests, but with an empty room, he opted to allow the young riders to stay.

"We have a pretty large extended family that comes up to Whistler every weekend and so they all fill our home. My in-laws, my sister-in-law, my brother-in-law and their two kids were going camping for that whole week so their room was empty," he said. "I had a chat with my wife. We do have a three-year-old and a one-year-old and these kids are 20, but they had no place to stay and we know what accommodation in Whistler is like."

Kling's lone request of the duo: they could come home late, just don't wake the children.

"We sleep little enough as it is right now," he said.

During the week, both riders filmed a promotional video riding their bikes through the hotel's construction site in Whistler Village.

Though Boggs found a place to rest, he still wasn't entirely settled at Crankworx. Complicating matters was his status as an alternate for Red Bull Joyride, as he trained for the event on standby while racing others, where many of his competitors trained their eyes on slopestyle for the full week. Though he was inserted with less than a half-hour notice, Boggs still finished in the top half of riders in eighth.

"Sunday, I went up there and practised with all the guys just because everyone up there are my good buddies and I wanted to be up there for support," Boggs said. "Twenty or 30 minutes before the event started, one of my good buddies Max (Fredriksson) got hurt in practice and ended up breaking his collarbone. He knew it too and said, 'Reed, I guess you're in.'

Kling explained he and his family are regulars at Joyride, but this year's visit to Skier's Plaza was a little more special than in years past.

"It was so nice rooting for someone. Usually, you go there and you cheer everyone on but you don't really know anyone personally," Kling said.