Twenty-four boys and girls are getting a chance to try a new sport at the town's new Intro to Field hockey program.
Jun 11, 2021 9:00 AM By: Harrison Brooks 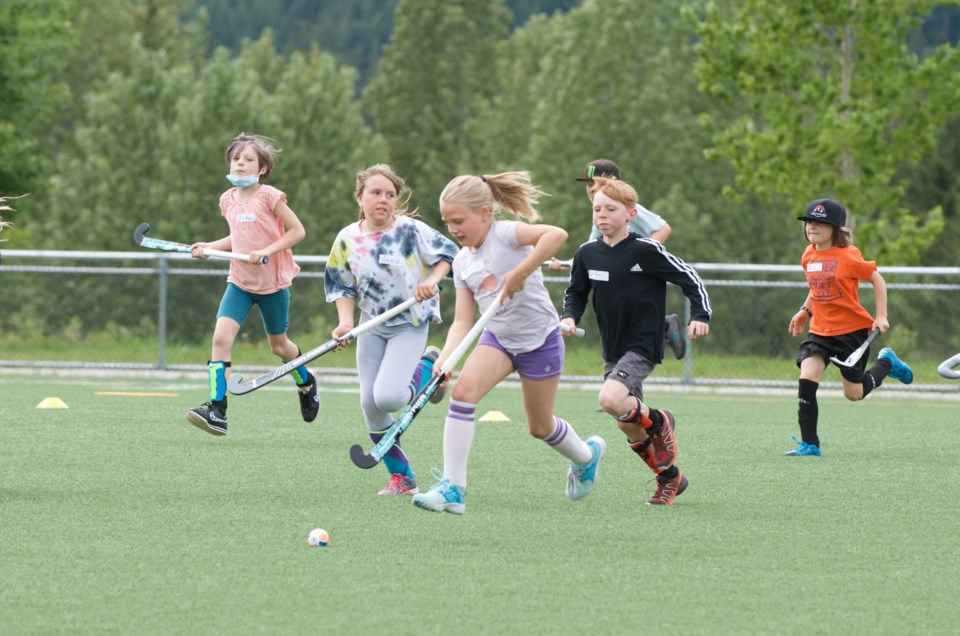 Twenty-four kids, aged eight to 12 signed up for the RMOW’s Intro to Field Hockey program this spring.Christiana Spooner

The Resort Municipality of Whistler’s (RMOW) recreation department is about halfway through its Intro to Field Hockey program aimed at introducing the sport to Sea to Sky youths.

“[The kids] seem to be really liking it,” said Joelle Tiessen, one of the program’s coaches.

“In the first couple weeks we were kind of wondering because there was only one kid that had ever played before, and it was brand new to all the rest of them. But they seem super keen and it seemed like the hour went by really quickly for everybody. So, I don’t think we’re having a problem keeping their interest.”

Tiessen and the RMOW’s manager of recreation, Roger Weetman have been looking to bring field hockey to Whistler for a long time and were excited when they finally had a chance to bring it to life this year.

“Once the artificial turf field was completed, I saw a unique opportunity to introduce field hockey to kids in Whistler,” said Weetman in an emailed statement from the RMOW. “I was amazed at the uptake of the program and how many people are coming out of the woodwork with experience in the sport. I think parents are genuinely excited to see their kids participate in a new sport and it has been rewarding for the coaches to watch them learn it.”

According to a statement from the RMOW, this clinic marks “the first time field hockey has formalized in Whistler.” The program has a total of 24 kids, mostly girls, ranging in age from eight to 12 years old. It started April 26 and will run until June 21 every Monday at 4 p.m. at the Andrèe Vajda Janyk Sports Field in Cheakamus Crossing.

The program has been following Field Hockey Canada’s guidelines on how to teach the sport. And while the children all seem to be enjoying it, there have been some challenges in teaching the kids all the techniques needed to play. For some of the kids who already play hockey, it was a challenge getting them up to speed on the different rules. And for the others, cardio seemed to be an issue, according to Tiessen.

“There’s no offside in field hockey, you can’t attack somebody’s stick,” she said. “You can’t kick the ball, so there are just a few little things that are kind of key to moment-to-moment play that are a little bit different. I would say the game is tactically most like soccer, actually, in terms of position and how the game is played.

“But it’s kind of funny because it’s always said the kids in Whistler are like super athletic—and they have been picking it up very quickly—but the one thing we have noticed, though, is I don’t think there is a lot of running sports in this town because we have to work on their fitness a lot. Field hockey is a very running-intensive game, so we’re definitely working on the cardio.”

Despite the program coming to an end in a couple weeks, Tiessen believes that there is enough interest, in both kids and adults, to get a more permanent field hockey club going eventually.

“We are gauging interest right now,” she said. “And we would be keen to start a club and eventually I think there is interest in the adults too to get something going, maybe in the fall.”

Young field hockey coach takes over Canada after helping Spain rise up the ranks
Jan 28, 2021 11:50 AM