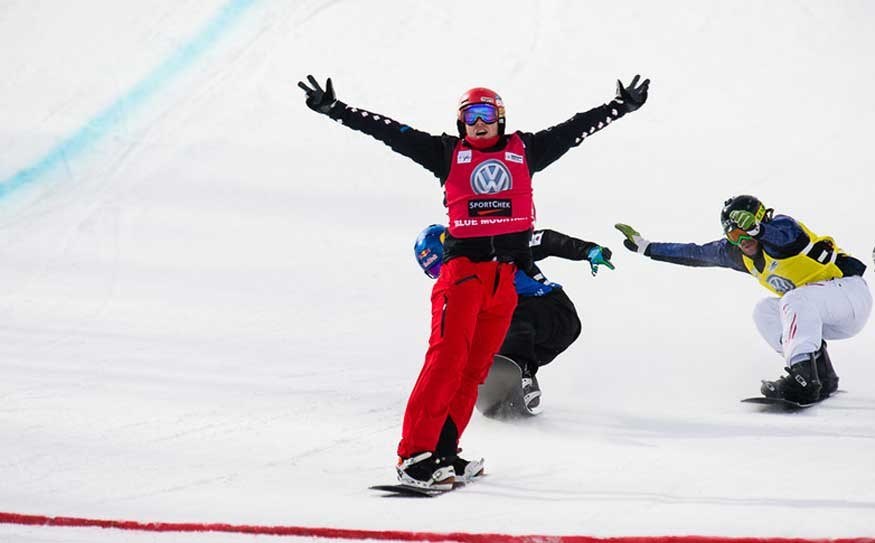 Canada's Chris Robanske has been the top male snowboardcross racer in Canada the past few seasons, while the men's team overall has struggled to make podiums following the retirement of top athletes in recent years. This past weekend at Blue Mountain he took his riding to yet another level with his first World Cup win, with thousands of fans cheering him on.

"It feels really good," said Robanske, who wasn't even sure he'd be competing after hurting his knee during the time trials the previous day. "It really just shows that the hard work and staying determined, it's all starting to pay off. It's nice to see the success come here at Blue Mountain. I definitely know that the riding was there and that I could produce results so I was just really focusing on the process and hopefully letting the outcome happen."

With the win, Robanske is the first Canadian man to win a World Cup since Drew Neilson in 2007.

On the women's side, both Dominique Maltais and Maëlle Ricker made the final once again, with Maltais placing second and Ricker finishing fourth on the day. Ema Samkova of Czech Republic took the gold medal while Nelly Loccoz Moenne of France placed third.

Samkova won the hole shot and Ricker was sitting in second when Maltais took over the lead. Ricker fell in the traffic, while Samkova rallied and pulled past Maltais again at the halfway point.

This hasn't been Quebec's Sebastian Toutant's season in some ways as he's missed the podium at premier events like the X Games and FIS World Championships while teammates like Mark McMorris and Maxence Parrot have stepped things up a notch. But at the Billabong Air and Style in Innsbruck, Austria this past weekend, Toutant stepped back on the podium in second place to place first overall in the TTR World Tour big air rankings.

"This is the first time that I've won this title in big air," said Toutant. "Last year, I had won in slopestyle. Most competitors who are good in slopestyle are also good in big air, but it shows that I am versatile and can stand out in both styles."

Toutant's silver medal jump was a cab 1260 double cork jump with a melon grab. Eric Willet of the U.S. placed first with a switch backside 1260 with mute grab, and Aleksander Ostreng of Norway was third with a backside 1260 mute.