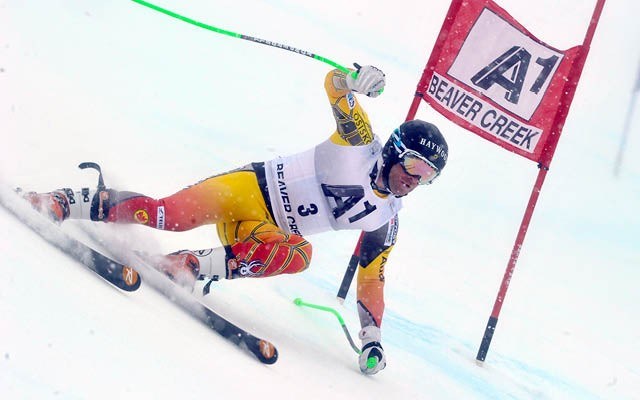 Robbie's Return Whistler's Robbie Dixon skis to a career-best fourth-place super-G finish at Beaver Creek, Colo., in 2011. The 28-year-old is hopeful to make his return to the World Cup circuit at Lake Louise later this month. Photo by Pentaphoto / Courtesy of Alpine Canada

If there was ever a good way to fracture your leg, Robbie Dixon may have done it.

After all of the bad luck the Whistler skier has had with injuries in his racing career, it was about time he caught a good break.

Dixon is targeting a return to competition in the first World Cup speed races at Lake Louise later this month, which will come just over a year after he suffered a tib-fib fracture in a training crash days before the 2012-13 campaign began.

"Things are finally starting to look up," he said Tuesday, Nov. 19 from Calgary.

Concussion symptoms forced him to miss extended parts of the previous two seasons — Dixon has made just 24 World Cup starts since the 2010 Olympics — making last year's injury even more frustrating.

"I came into last year fit, healthy — my head was fine, I had no issues there — and fully confident. To have that happen one week before the first race of the season was just devastating," said the 28-year-old.

But the break to both bones in his lower right leg was as clean as they come, as there was no additional joint, muscle, nerve or tendon damage. That's helped make it a smoother recovery process for Dixon, though not one without some tedium and anxiety.

"As nasty as the break was, I was very fortunate," he said. "Knowing that was huge. But at the same time it was kind of scary.

"You snap your leg right in half and it's like, 'How the hell is this thing going to heal up?'"

As discouraging as the string of health problems have been, Dixon said he was inspired thinking of other skiers who came back from more serious ailments and found success on the race course again, including some of the all-time greats.

"Didier Cuche was a huge one. The latter part of his career, he was very successful after breaking his leg," said Dixon. Cuche, the Swiss star who retired in 2012, won all six of his Crystal Globes over the final six years of his career.

"I talked to him a little bit about what he went through and that definitely helped me a lot."

Dixon recently returned home from a two-and-a-half-week training block in Colorado with the rest of the speed team and is now settling in at Nakiska for some downhill runs this week. Being back with the Canadian crew has been "a great feeling" for the Whistler Mountain Ski Club alum.

"It was tough being on the sidelines last year, especially being a North American-based athlete," said Dixon, who has four top-five finishes in his career but is still seeking his first podium. "When you're not part of the crew and the majority of the racing is in Europe, you feel a big disconnect."

Though a decision on whether or not he'll race at the season opener is likely to come much closer to the downhill and super-G races scheduled for Nov. 30 and Dec. 1 at Lake Louise, Dixon said the gentle terrain (by World Cup standards) and his familiarity with the course makes it a good venue for his return. He's feeling more like his old self on snow and gaining more and more confidence in his skiing as he works to bring his now-healed right leg back to full strength.

But Dixon is also in no huge rush. Although it's an Olympic year and he'll need some strong results to earn a spot in the Games in February, he said he won't be risking the long-term health of his leg for a chance to ski in Sochi.

"What I want more than anything is to make sure I'm doing the right thing for the leg so I can carry on and hopefully live out a healthy career," said Dixon, who raced on his home hill in Whistler during the 2010 Games. "I think I've still got six more years of this, easy, and I don't want to rush back just for the sake of trying to make the Olympics and then re-injure myself.

"I've come to the realization and accepted that if I (get to Sochi), great. If not, it's not the end of the world, because I'd rather be healthy and get myself back to a competitive level to fight for the podium on any given weekend."