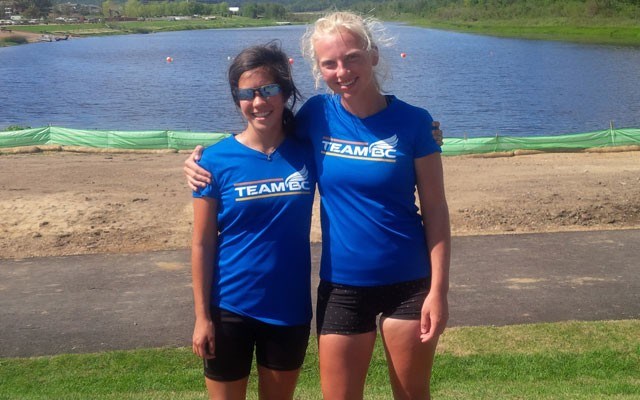 Fort McMurray is known for its oil, but Pemberton's Hana Ronayne found some other precious resources there.

In her first race outside the province, the Pemberton Canoe Association paddler scored three bronze medals at the Western Canada Summer Games. In the two-person event with partner Anna Zhang of Vancouver, Ronayne won bronze in the 500-metre and 5,000-metre races, while she also took one with the four-paddler team with Zhang, Melody Oh and Sam Loutet. Ronayne and Loutet paddled to fourth in the 1,000 metres.

Individually, Ronayne also placed fourth in the 500 metres and eighth in the 5,000 metres.

Ronayne, 15, and her teammates were generally paddling at a slight disadvantage, as paddlers under the age of 16 had to wear life jackets, which she called "annoying" but not a major factor. They shook it off, however.

"I felt I did pretty well for my age compared to the other athletes," she said. "Everyone that we competed against didn't wear a life jacket, so it kind of showed to us that we're younger than them, but we're still able to keep up with them, and in some cases beat some of them."

Ronayne said the 500-metre bronze was the most memorable for her, as it was the first one she and Zhang had medalled in together.

"It was pretty intense because Alberta was right beside us and we were pretty equal coming down to the 100-metre marker," she said. "We had to pick it up a bit, and it was a great feeling to cross the finish line before them."

Ronayne and Zhang will next see major action in Ottawa for the Canadian Sprint CanoeKayak Championships next month.

Pemberton's Oliver Esseltine also participated with a best finish of fourth in the four-man 500-metre race.

Denroche posted the top time in seeding, but was edged out by fellow British Columbian Emily Handford for gold.

Her participation was far from a lock, as just over three weeks before the event, Denroche suffered a massive crash at Panorama in the British Columbian DH series that left her with a cracked rib, concussion and busted bike.

Her sponsor, Norco, supplied a new set of wheels and Denroche healed in time to take part in the Albertan race. Even after taking recovery time off before hopping back on the bike and the rib still dully bothering her, she took advantage.

"I was having a really good day. I'd had two races before (on) that day and I just felt really good and confident," she said.

Denroche is primarily a downhill racer and very little about the grassy cross-country course jived with her preferences. Still, she'd been practicing sprints in the lead-up and made it all work with a medal on the line.

The Pemberton stables took 10 horses down to the Spokane Sport Horse Farm for its Dressage Spectacular I-II on Aug. 8 and 9.

One-year-old filly Wishing Star DMV ended up as a champion in the one-to-three-year-old fillies class. In the one-to-three-year-old colt and geldings class, Dreamcatcher pulled off the sweep, with Wunderbar DMV, D-Trix DMV and Westminster DMV taking the top three in order. As for the mature mares, Ballerina DMV scored an 83 per cent en route to becoming the class champion, while Dreammaster DMV and Lordsley DMV emerged as the champion and reserve champion in the mature stallions class.

Overall, Ballerina DMV took the top slot in the grand championship and Dreammaster DMV was the reserve champion.

As for the ridden portion of the contest, stable co-owner John Dingle was named the ridden high point champion of the show. Dingle, competing in FEI Intermediate 1, rode Ballerina DMV to scores north of 80 in the dressage tests.

Lordsley won the materiale event in the young horse class with a score of 85 and Dancier's Dream won several classes.