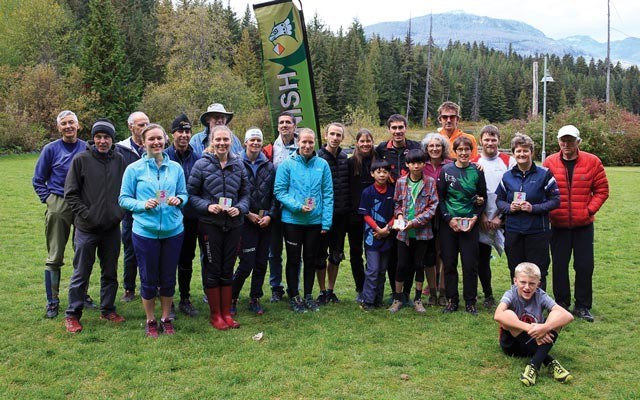 FINDING THE WAY Podium finishers at the B.C. Orienteering Festival are shown after completing the three-course challenge. Photo submitted

Coming into the Whistler Orienteering Festival, which doubled as the provincial championships, Emily Ross was confident.

The Vancouver resident and graduate-school student won the national championship here in the resort in 2014 and continued that dominance once again at the event, held in and around Whistler on Oct. 1 and 2, by taking the women's 21-to-34 sprint and long titles, the competition's elite age group.

"I have fond memories of when the Canadian Championships were there," she said. "I was excited to re-run on that map. There's nicer terrain than in the Lower Mainland because the forest is a little more runnable than we have down here in Vancouver so it was a really great quality."

Ross praised organizers for their planning of the courses, explaining there was some "really fun terrain" competitors had to traverse.

There were three separate races over the course of the weekend as the middle distance challenge was in Brandywine Provincial Park, the sprint in Cheakamus Crossing and the long race split between Black Magic and the Lost Lake Trails.

"It was pretty tricky terrain," she said. "The first (course) was in Brandywine and that's super technical orienteering so you have to be really sure about where you are, so you can't maybe run as fast as you'd like because you can't keep up with your map-reading skills.

"Then we raced in Whistler up in Black Magic and Lost Lake. It was two different styles of orienteering that you have to do. One, there aren't very many trails, so you have to have good map work and the other, there are so many trails that sometimes they can get a bit overwhelming trying to keep track of all of them."

Ross noted the last race can be particularly challenging toward the end with so much to be mindful of while battling some exhaustion.

Though she was familiar with the general area, there are always curveballs with each competition. Ross said much of the sport is reacting to the map presented to you and then determining the path to victory on the fly.

"Most of it is figuring it out when you get there. I have run on those maps in previous years but I didn't do a lot of specific prep. At big events, at the World Champs, athletes will try to plan courses on the maps so they have an idea of what you might experience when you get there," she said. "For this one, you just flip over the map and then you try to figure out what you have to do."

Ross, 24, has been orienteering since the age of eight and added it's a fun family activity.

"My entire family has done it over the years," she said.