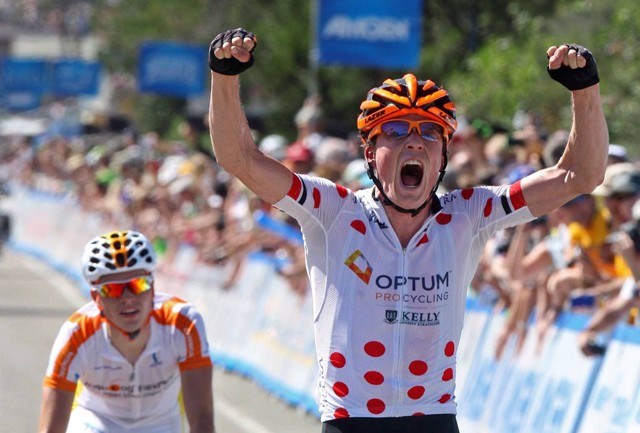 Whistler's Will Routley won Stage 4 at the Amgen Tour of California on Wednesday, May 14, earning the first UCI victory of his career.

The 30-year-old pro cyclist also hung on to the King of the Mountain jersey after sweeping all three KOM sections on the 165-kilometre leg between Monterey and Cambria.

"I've been feeling really good sprinting at the top of climbs the past three days. I came here to win a stage, that's what I've wanted to do every time I've come to the Amgen Tour of California," Routley said in a release. "I wasn't expecting today was going to be that day. It's a bit of a dream right now."

Routley, who rides for Optum p/b Kelly Benefit Strategies, also grabbed the sprint jersey during Wednesday's triumph, overtaking the points lead from 25-time Tour de France stage winner Mark Cavendish. In the KOM standings, Routley has collected 32 points in four stages, while nobody else in the field has more than 13.

Routley went out with an early breakaway with five other riders 16 km into Wednesday's stage, and the group was never caught. With the peleton minutes behind as the break neared the finish, the racers who escaped were able to battle it out in a sprint to the line.

Team Novo Nordisk's Kevin De Masmaeker made the first move, but Routley responded with an attack of his own.

"I positioned myself in the middle of the group because I know my initial jump is good," Routley told Cycling News. "Fortunately, it worked out well. Someone opened up the sprint a little early. I was able to jump on his wheel and come around exactly where I wanted."

See Pique on Thursday, May 22, for more.