Routley headed back to Commonwealth Games 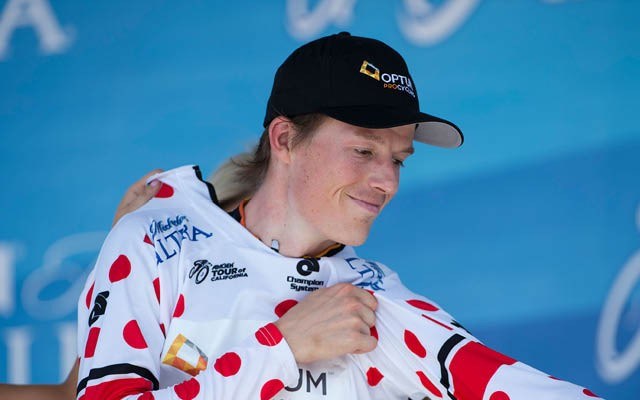 canadian addition Whistler's Will Routley pulls on the King of the Mountain jersey at the Tour of California earlier this year. He'll put on a Team Canada jersey next month in Scotland, where he'll once again represent the country in the men's road race at the Commonwealth Games. Photo courtesy of optum p/b kbs

For all the success Will Routley has found this season, the Whistler cyclist would like to add one more title to his resumé — Commonwealth Games medallist.

Routley will join the Canadian cycling team in Scotland later this month for the Commonwealth Games, where he'll compete in the road race in Glasgow on Aug. 3.

It's a return trip to the Games for Routley, who also rode for Canada four years ago when the event was held in India.

"I'm super excited," Routley said Tuesday, July 1. "This time in Scotland, it's a course that's well-suited to me and it should be a hard race.

"Everything now is just trying to recover from the last huge amount (of racing), get in a good block of training and build up again."

Cycling Canada had previously named a 16-rider team to compete in the road and track events in Scotland, but were afforded two more spots on the squad if they could be filled with medal contenders. That meant there was space for Routley and Svein Tuft, the other addition announced last week, on the roster.

"I had really good form then, but not quite as much international experience," said Routley. "The first time you go you're a little more wide-eyed to the whole experience, whereas now being in the Games isn't really overwhelming... all of the energy is just focused on the race."

The circuit course is one that could play to Routley's strengths — technical, with short, steep climbs and few flat sections. The 31-year-old said previous races on the course have seen the peloton get broken up into small bunches.

"When you have a guy like (Manx rider Mark) Cavendish there, who's the fastest sprinter going, most of the strong teams like New Zealand and Australia are going to want to break the race apart, so that should suit me well," he said.

Routley learned of his addition to the team just before the Global Relay Canadian Road Cycling Championships, held June 26 to 29 at Lac Megantic, Que. Coming off an intense block of racing, including five days riding up front in the North Star Grand Prix in Minnesota, where he helped Optum p/b Kelly Benefit Strategies teammate Ryan Anderson to the yellow jersey, Routley didn't have much left in the tank.

"As much as I wanted to go to nationals and take another run at it, and try to win it again, when I look at the entire season and knowing I was going to the Games, it wasn't a top goal," said Routley, who won the national road race title in 2010.

"It's always a little disappointing when it's a national championship. The last few years, I've started to be Mr. Consistency at nationals, always being a factor and getting on the podium a few times. I never like to show up and not be at my best, but it's hard to be at your best all the time."

Although Optum will be sending a team to B.C. Superweek, which gets underway on Friday, July 4, Routley will race a reduced schedule as he keeps his focus on preparing for Scotland. He'll for sure be on the start line for the White Spot Delta Road Race, a UCI-sanctioned event that closes the Tour de Delta on July 6, and Global Relay Gastown Grand Prix on July 9.

"I'm tentative for the others," said Routley, as B.C. Superweek continues through to July 13. "The most important thing at this time of year is being in one place and going out and training every day. It's been months since I've done that."

He's also planning to ride the Cascade Cycling Classic in Oregon after Superweek wraps up, but otherwise is looking ahead to his chance to contend for a Commonwealth Games medal.

"It's already been a great season and I've had a lot of success, so I can't complain no matter what happens," said Routley. "But if I could add a medal at the Games to it, that would be pretty special."

Although nationals weren't so memorable for Routley this year, fellow Whistler pro Ben Chaddock had reason to be excited when the Canadian Criterium Championship title stayed in the hands of his Garneau-Quebecor team.

Rémi Pelletier-Roy rode to the victory on Sunday, June 29, meaning Garneau-Quebecor now has the last three national crit champs on its roster — 2013 winner Pierrick Naud and Chaddock, who won the year before that.

"We all covered the moves really aggressively at the beginning of the race, and (Pelletier-Roy) got out on a break just like he wanted to," said Chaddock. "Rémi made sure the front of the race was secure, and it was awesome."

The team now turns its attention to B.C. Superweek, having brought a six-rider team out west to race around the Lower Mainland.

"We're going to do every event, which I've never done, ever," said Chaddock. "I've never done Burnaby before, and the last time I did White Rock was my first year as a Cat 2.

"I'm looking forward to going back to that race."

Chaddock said he's looking forward to spending some time close to home for the block of races, adding that his team is going in feeling encouraged after another notable result at nationals.