Runners arriving from all over for Whistler Half

More than three-quarters of all runners in half marathon and 10K coming from beyond Sea to Sky
Jun 4, 2014 6:00 PM By: Eric MacKenzie 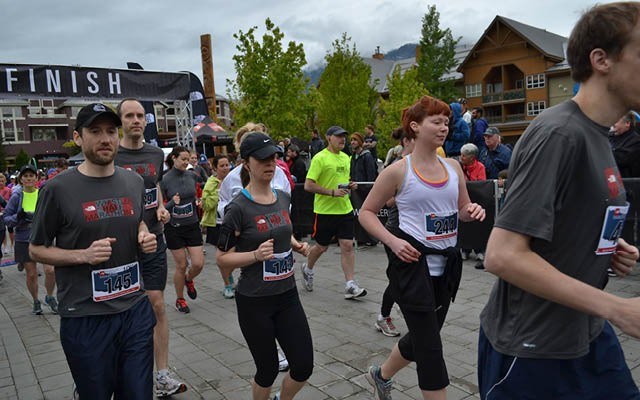 ready, set... Runners begin their race during last year's North Face Whistler Half Marathon. Eighty per cent of runners in this year's event, taking place June 7, are coming from outside the Sea to Sky corridor. photo by eric mackenzie

Less than a week before the 2014 edition of The North Face Whistler Half Marathon, race director Dave Clark had the kind of chance encounter that any event organizer in the resort would love to have.

Clark, out on the course that will welcome up to 1,800 runners on Saturday, June 7, bumped into a woman training for this weekend's run.

"We got to talking with her, and she was out from Toronto, is here for 10 days, and had come out because of the Whistler Half Marathon, but came a week ahead of time to get some practice running in," said Clark.

"Hearing anecdotal stories like that is pretty awesome, for sure."

And it was also indicative of the kind of runners the event is attracting as it enters its fourth year.

When the event began in 2011, nearly half of the participants called the Sea to Sky corridor home. But Clark and his team have noticed a dramatic shift in who's coming to run.

"Eighty per cent of our runners are coming from outside the corridor," said Clark. "We've got 19 different (U.S.) states represented this year by runners, and nine different provinces and territories. It's obviously found its way not only to the regional calendar for runners, but right across North America, so that's really exciting to see."

In other words, the Whistler Half Marathon has become a can't-miss event for runners across the continent, and the proof is in the numbers: All positions in the 21.1-kilometre half marathon field were sold out almost three months before race day, and all spots on the 10K start line could be gone by the time the start gun goes off Saturday morning.

This year's race will once again feature a strong field of elite runners, including the men's and women's defending champions in the half-marathon distance, David Jackson and Catrin Jones. There will be a $250 cheque waiting at the finish for the first-place man and woman on Saturday, and prize money up for grabs in the 10K as well.

"We'll definitely see great races off the front of the pack for both the men and women," said Clark.

The courses remain unchanged for 2014, making use of the resort's Valley Trail for much of the route between the start and finish at Whistler Olympic Plaza. The one-kilometre Little Rippers kids run will also take over the village again once adult runners are off course on Saturday morning,

But one major addition to this year's event is new programming on Friday, June 6, and Sunday, June 8.

Friday's schedule includes the Instride Seminar Series, which is free at open to the public. Course orientation, meditation techniques, recovery strategies and overcoming the mental challenges of long-distance running will all be topics of discussion. The seminars begin at 1 p.m. at the Crystal Gallery in the Crystal Lodge, ending with keynote speaker Diane Van Deren, an ultramarathoner known for completing some of the world's toughest long-distance running events, at 5 p.m.

Meanwhile, runners will gather together Sunday morning for the Recoverun Restorative 5K Trail Run. Van Deren and local run coach John Blok will lead the slow-paced recovery jog through the Lost Lake trails, though spots in the day-after run, for race participants only, are going quickly online.

"What we want to add on to the event, as we continue to grow, are some education pieces that are of value to people," Clark said of expanding the weekend's schedule.

Although general registration has closed online, there are still a few dozen openings in the 10K that can be reserved, in-person, at the Crystal Lodge on Friday starting at noon.

Clark said the event is still looking for more volunteers, particularly to work as course marshals.

Visit www.whistlerhalfmarathon.com to sign up as a volunteer, or view full race details, including road closure information for Saturday morning.