Times faster despite added trails and surprises
Sep 12, 2008 9:42 AM By: Andrew Mitchell 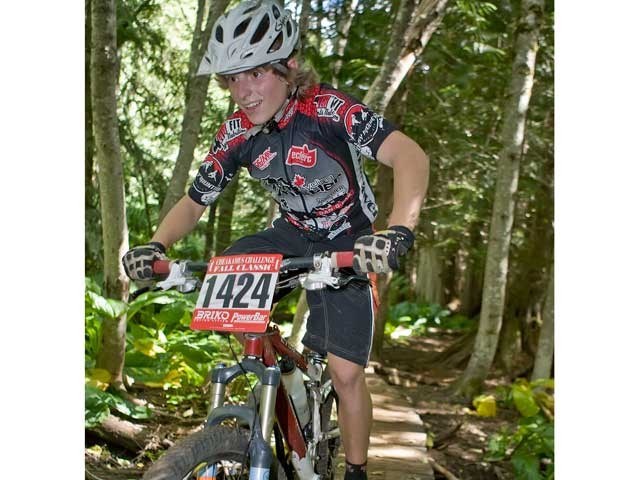 Distance, Rate and Time Jesse Melamed, riding A River Runs Through It, managed to cute almost 40 minutes off his time in the 2008 West Side Wheel Up compared to the previous year. He finished second among juniors. Photo by Joern Rohde, wpnn.org.

However, all of the new sections added up to just 41 seconds for Matt Ryan with his winning time of 59:52.

“The new sections were quite a surprise — we’ve all got that course down for years and know which way to go, so it was great to see new singletrack and it was fun to ride when you didn’t know where you were going,” said Ryan. “One of the trails was brand new, and was a bit of a leg zapper, but it was a great addition.

“You couldn’t ask for better weather, it wasn’t wet and it wasn’t dusty, it was just a pleasure to ride.”

Ryan will be riding in the South Chilcotins this weekend and will skip the Soo Valley Rumble. He does plan on entering the Cheakamus Challenge, after winning an entry in the West Side Wheel Up.

“The Cheakamus Challenge favours the road riders a little more, and you dread it a little because of the distance, but getting to the finish line is always such a great feeling.”

Joanna Harrington picked up her fourth tie-dye winner’s jersey, somehow cutting over three minutes off her time from last year with a time of 1:14:02.

“The course was awesome, it was nice to ride some new sections and the River Runs Through It Extension looks great,” she said. “I’m not sure if it’s longer or shorter with the changes they made, but it was definitely more technical overall.”

Harrington injured her knee in a fall on River that might keep her on the sidelines for the Soo Valley Rumble and Cheakamus Challenge. She’s hoping to race in both events if her knee feels up to it.

“It was a pretty bad crash. I don’t even know what I was doing when I fell off my bike, probably reaching for a water bottle or something. I didn’t even think about it until after the race,” she said.

For the juniors, Tyler Allison was first in 1:04:22 — good enough for sixth in the senior men’s category, and about seven minutes faster than the previous year. Jesse Melamed was second in 1:07:01, or about 38 minutes faster than in 2007. Mahon Lamont was the youngest racer in the mix, and finished in 1:50:30.

The course started on the Millar Creek road in Function Junction, and crossed over onto Alta Lake Road and the turnoff to Lower Sproatt. Riders had the option of following the classic trail, which includes a steep section, or taking the longer and easier way up a new set of switchbacks. Most of the fast riders took the old route.

From there the trail went around Beaver Lake to Stonebridge, and followed Upper and Lower Beaver Pass trails to Alta Lake Road. The first surprise was a roughed in trail on the east side of the road that runs from the old exit of A River Runs Through It to the Rainbow Parking Lot. After that section, riders climbed the trail on the west side of the road to Bob’s Rebob, and then crossed the road again to tackle another new section tacked onto the start of River. Racers then followed all of A River Runs Through It, including the new section at the end that exits at Rainbow Park parking lot.

Organizer Phil Chew estimates that the event raised over $3,000 for the B.C. Disabled Ski Team.