Both Melamed and Lanthier Nadeau experienced ups and downs en route to solid finishes
Oct 9, 2019 5:45 AM By: Dan Falloon 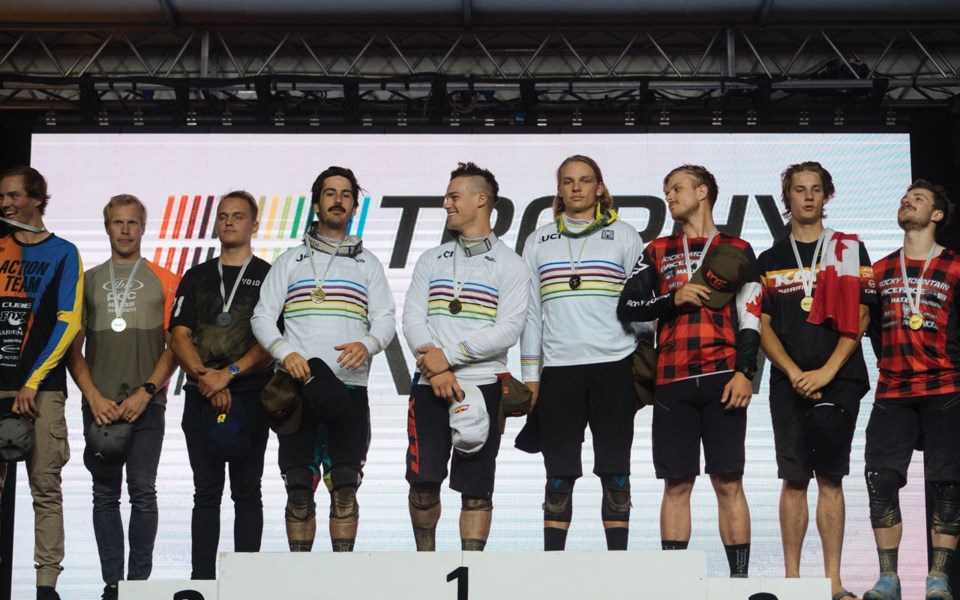 Andreane Lanthier Nadeau had a breakout season on the Enduro World Series circuit in 2019.

The Squamish resident, formerly of Whistler, held on to finish the season on the overall women's podium in third place after the final series race of the year in Zermatt, Switzerland.

"It hasn't fully sunk in yet," she said. "On the way back in the plane, I was writing about how there was this stillness, this calm feeling of a completed task. Having done it, rising up to my potential, and having sealed the deal with that third-place overall feels very grounding."

Lanthier Nadeau said after the race, having clinched her position, she needed a break and took some time off in Italy before the standalone season-ending race, the Trophy of Nations, in Finale Ligure, Italy.

"It was super stressful for me to secure third place at that last race," she said. "After Zermatt, I was in need of a break so we took an Italian vacation before the Trophy of Nations. I went to Cinque Terre, went on a boat with a bunch of friends from New Zealand and Great Britain. It was really chill and that was truly what I needed.

"I'm glad I listened to my body because I ended up having such a good performance for the team and for myself, too."

At the inaugural Trophy of Nations race, Lanthier Nadeau teamed with Squamish's Miranda Miller and rookie Jennifer McHugh to earn a third-place finish as part of the team event.

"It was awesome. I think it was kind of an experiment for everyone that was there because it was the first time we had that format and it was the first time for many riders to race together," she said. "The atmosphere was a bit lighter and everyone was excited to try it. Everyone got their national pride because when you race for your country, it's always something special."

Though it wasn't officially tallied, Lanthier Nadeau did the math and discovered she was fastest female rider by time, even beating overall champion Isabeau Coudurier of France, who swept all eight races.

This offseason, Lanthier Nadeau plans to work on some weaknesses where she can improve, namely technical work and core, stability and strength training.

Meanwhile, on the men's side, Whistler's Jesse Melamed finished 11th, missing the top 10 by just 45 points, which can be chalked up to a midseason crash in Val di Fassa, Italy that left him at less than full strength coming into the Canadian Open Enduro here in Whistler.

Reached via email, Melamed explained that while he was proud of his achievements over the course of the season, especially with how he came back from injury, they're not exactly the accomplishments he had in mind coming into 2019.

"I proved last year I could come back from injury straight back to the highest level. If that's a challenge I had to prove I could overcome, great, but I don't want to keep doing that. So to me this was just another potentially-great season marred by injury," he wrote. "I am proud of the way I started the season to get myself to second overall, and I am proud of the way I came back yet again finishing inside the top 10 at the last three races of the season.

"But I know what I'm capable of and with my current goal being a solid overall season, I won't be fully satisfied until I achieve that."

Melamed, who has had his fair share of injuries over the years, felt that he made some strides this season in an attempt to pull off the consistent season he's looking for in 2020.

"My development was my approach to each race. I always want to win every race I enter, but I had to tell myself that

my win was riding consistent and within myself. It was challenging holding myself back a bit but it was working. Of course I was still riding fast but it was more about knowing where I was comfortable going fast and where I thought I should hold back to be safe," he explained. "Unfortunately, a small slip-up put into question whether or not I was sticking to my approach. I believe I was. I don't plan on changing anything for next season. Just be smarter."

Melamed said he enjoyed the Trophy of Nations format, as it turned the typical enduro race experience on its head.

"It was such a fun way to experience an Enduro race. We all ride and hang out during a normal Enduro day but when the time starts, it's all you," he wrote. "...there were two other riders to think about in the race run and it worked as a beneficial distraction for me. I was thinking about them as much as myself, which broadened my focus and helped me ride instinctively and not over-think things.

"It was super fun racing with Remi and Rhys and sharing the effort and achievement with them. We were all having a lot of fun and bringing each other's stoke and performance up. I felt the most energized for the last stage of this race than I have at the last few races."

With all the challenges he's faced in his career so far, Melamed said some elements of racing have become easier, while some are harder. Essentially, he said, he's more familiar with what he needs to do, but the process of accomplishing it remains as difficult as ever.

"It isn't racing specifically but everything racing at the highest level entails. I have a passion for working hard, being dedicated to something, improving myself, and testing myself at the highest level. I get all of that through racing so it would be hard for me to just step back from that," he reasoned. "I'm not sure how many more injuries I have left in me so I'm very focused on making sure I'm managing the risk and being as safe as I can be."

Heading into the offseason, Melamed will look to get his body back to 100 per cent as he said he "took a beating" this year. Other than that, he'll stick with his traditional regimen as he found it has kept him fit in the past.