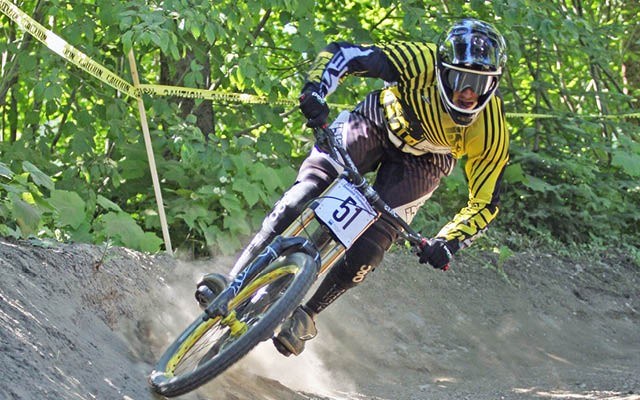 silver lining Whistler's Jack Iles posts the runner-up time in the men's junior expert class at the Canadian Downhill Championships, finishing just 11 hundredths of a second out of the gold-medal position. photo by guy napert-frenette / courtesy of cycling canada

Nine different riders brought home a medal from last weekend's Canadian Downhill Championships at Sun Peaks, five of them being of the gold variety.

Whistler's Jack Iles, however, was left wondering what he could have done to pull that total of first-place finishes to six.

Iles had to settle for silver in the competitive junior expert men's class (U19) on Sunday, July 13, when his time of three minutes, 39.66 seconds came up just 11 hundredths shy of the winning time posted by North Vancouver's Daniel Shaw.

"It was a good run, but I felt like I might have been a bit too conservative," said Iles. "I went over my run a lot trying to figure out how I could have made that up, and there were definitely a lot of ways. I seeded first by nine seconds, so I thought I had a bit of time."

But the result wasn't totally disappointing for the former U17 Canadian champ, as Iles earned the top-two finish he was seeking to earn a berth to the world championships later this year. He'll be staying close to home over the next couple of weeks to get prepared for the World Cup at Mont Ste. Anne, Que., later this month, skipping this coming weekend's BC Cup race at Silver Star.

Steve Storey is among the corridor's newest national champions, as the Whistler rider collected a gold medal in the master men's 30-39 race. Squamish's Keara Clark also topped the podium in the master women's 30-plus category.

Meanwhile, Wynnie Tipton became the new U15 girls' Canadian champ, while Stephanie Denroche completed the same feat in the U17 girls' division.

But perhaps the most surprising national championship victory went to Georgia Astle, who claimed the U19 women's citizen title, but certainly looked like she could have pushed for the podium in a more competitive class.

"It's pretty cool because I'm pretty new to downhill, and it was a pretty spontaneous trip," said Astle, 17. "Really, it was only the Wednesday night at a Phat Wednesday — it was my second of the year — when I just decided, 'You know what? I'm gonna go to Sun Peaks.' So the next day we went, and I'm really glad I did."

Astle got to share the podium with a fellow Whistler rider, as Bobbi Douglas earned a bronze medal from the same race.

Although Astle didn't have the right license to race above the citizen class, her time of 4:12.31 would have put her right in the mix at the elite women's level.

"I was really excited because my time was only two seconds off of third place in the pro women's," said Astle, who plans to keep gaining experience in downhill racing.

"Looks like I'm going to Silver Star this weekend," she laughed.

That third-place time in the elite women's class belonged to Pemberton's Jamie Hill, who claimed the division's bronze medal. She finished about 15 seconds off the winning time set by North Vancouver's Vaea Verbeeck, while the silver went to Casey Brown. Whistler's Maria Darquier finished fifth.

The last of the nine medals went to Finn Iles, who claimed a bronze medal in the U17 expert men's race to lead a number of strong finishes from Whistler riders in that category. Bracken Camilleri finished in fourth place, while Alex Auger was seventh.

"(My goal was) to get top three, so I achieved my goal, and I was pretty happy about that," said the younger Iles.

"My run wasn't the best it could have been, but it was still a good run."

Lee Jackson was the top Sea to Sky rider in the elite men's race, finishing 14th, while Whistler's Zander Geddes joined him in the top 20, placing 19th.

"It was pretty good," Geddes said of his performance. "The track got really blown out, real fast, and it was super high speed. It was tough to do a full run without your hands wanting to fall off. But once you kind of got the course dialled, there was nothing really to it."

Several Sea to Sky cross-country racers are out in Ontario this week as their national championships approach, many turning in solid results at the Canada Cup race in Sudbury that also took place Sunday.

Racers from the corridor were outstanding in the junior expert men's race (U19), claiming five of the top 12 spots.

Quinn Moberg, a week removed from his BC Bike Race team victory with Greg Day, finished 31st in the elite men's race.

The Canadian Cross-Country Championships get underway on Thursday, July 17, near Barrie, Ont., and continue until Sunday, July 20.