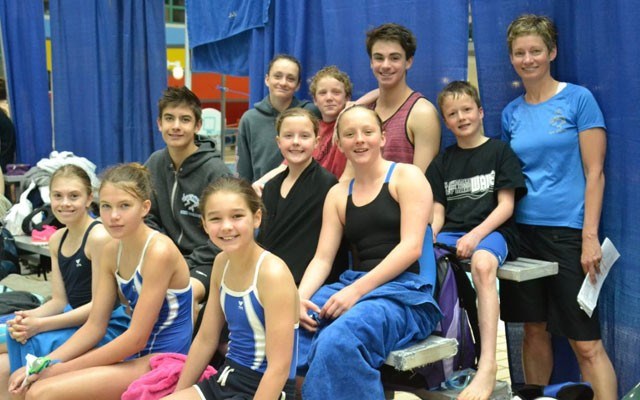 strong swimmers Members of the Whistler Sea Wolves are shown after the University of Victoria Pacific Coast Swimming Wavemaker Invitational meet in the provincial capital from April 24 to 26. Photo submitted

The Whistler Sea Wolves made a splash on Vancouver Island late last month.

Eleven team members went to participate in the University of Victoria Pacific Coast Swimming Wavemaker Invitational in Victoria from April 24 to 26 and all posted at least one personal best over the course of the weekend.

Kat Kranjc just missed out on the podium, notching a fourth-place finish in the 50m butterfly in the women's 15 and over division.

Meanwhile, 11-year-olds MacKenzie Williamson and Corinne Haasen were fifth and sixth in the 50m breaststroke.

Head coach Brandi Higgins noted the meet was a new experience for many of the swimmers, as they needed to adjust to the long course pool.

"Victoria was an amazing meet where all of the kids — after getting over the shock of how long a 50m pool really is! — swam well and showed great promise for big things this season," she explained in an email.

Full results are available at www.pacificcoastswimming.com.

The Sea Wolves also hosted a meet of its own for younger swimmers on April 18 with 30 swimmers from Whistler, Squamish and West Vancouver.

Those looking at taking part in next month's inaugural BarnBurner Triple trail-running race can get a sense of the third and final loop this Saturday (May 9).

Organizer Christine Cogger explained the run will take place in the One Mile Lake zone, and those who are running a shorter route on race day that doesn't include the loop can still benefit from the orientation.

"It's a great opportunity to get out and train on the trails with friends," she said in an email.

Runners will be meeting at 9 a.m. by the Pemberton Community Barn.