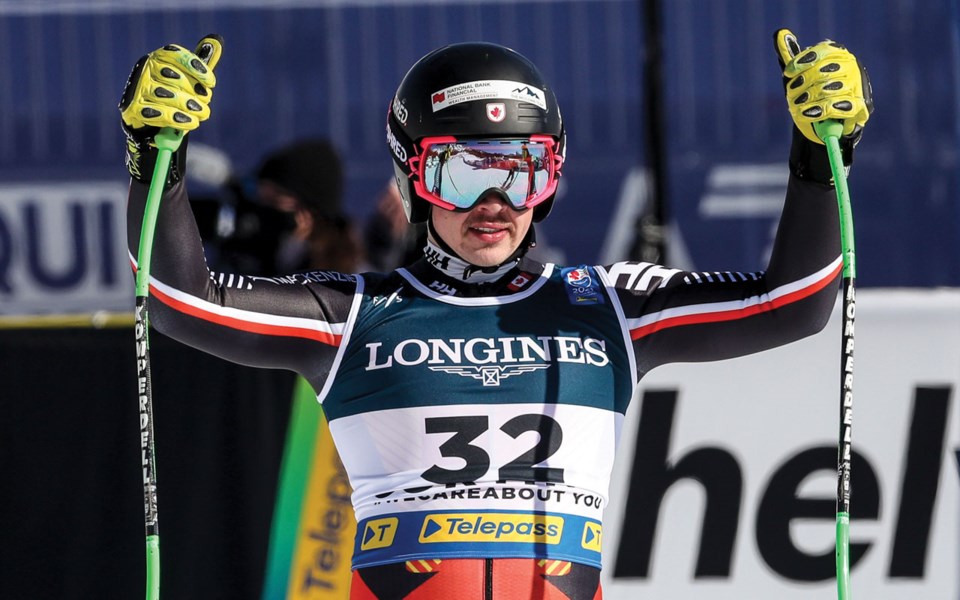 Brodie Seger saved his best international performance for his biggest stage so far.

The 25-year-old Whistler Mountain Ski Club (WMSC) graduate put up his first top-five finish on the world stage on Feb. 11, finishing fourth in the super-G at the FIS World Ski Championships at Cortina d’Ampezzo, Italy. Seger was 0.42 seconds back of winner Vincent Kriechmayr of Austria and just 0.04 seconds off the podium, with France’s Alexis Pinturault in third. Germany’s Romed Baumann was sandwiched into second.

Seger, who wore bib 28, had returned to the tour fairly recently after suffering a shoulder injury that kept him out of action for about a month.

“I’m incredibly fired up right now. This has been such a strange and difficult season dealing with my first real injury ever when I felt like my skiing was in a really good spot,” Seger said in a release. “Going through my first surgery and first rehab. Pushing as hard as I could to get back for this event.

“I am just so thankful for everyone who helped me get back to good health.”

Then on Feb. 15, it was Crawford’s turn to put up a fourth-place showing, doing so in the Alpine combined and finishing 0.21 seconds out of the medals. Wearing bib 32, Crawford was 1.33 seconds off the pace set by champion Marco Schwarz of Austria, who bested Pintuarault and Switzerland’s Loic Meillard. Trevor Philp hit the top 10, taking 10th, just ahead of WMSC alum Broderick Thompson in 11th, while Read took 22nd. No Canadian women finished the women’s Alpine combined as Shiffrin topped Slovakia’s Petra Vlhova and Switzerland’s Michelle Gisin for gold.

In the men’s downhill on Feb. 14, Crawford was the top Canadian finisher, coming in 21st as Kriechmayr came away with gold over Germany’s Andreas Sander and Switzerland’s Beat Feuz. Read placed 26th and Thompson was 29th.

Gagnon was placed 13th in the Feb. 13 women’s downhill as Suter came away with top spot over Germany’s Kira Weidle and Gut-Behrami.

Canadians struggled in the individual parallel events on Feb. 16, but the squad of Crawford, Cassidy Gray, Erin Mieelzynski, Erik Read and Jeff Read came away with an eighth-place finish on Feb. 17 as Norway topped the podium over Sweden and Germany.

The World Championships run until Feb. 21.

Pemberton cross-country skier Joe Davies helped the Canadian relay team to a sixth-place finish in the 4-by-5-kilometre contest at the FIS Junior World Ski Championships in Vuokatti, Finland on Feb. 13.

Davies, teaming up with Xavier McKeever, Tom Stephen and Olivier Leveille, finished 1:09.8 seconds back of the winners from Norway and 47.2 seconds off the podium.

Whistler is set to host the next running of the championships in 2023.

North Vancouver’s Jane Channell led the Canadian charge at the IBSF World Championships at Altenberg, Germany on Feb. 11 and 12.

Channell posted an eighth-place finish over four runs, ultimately coming in 1.98 seconds back of champion Tina Hermann of Germany, who came in ahead of fellow German Jacqueline Loelling and Bobsleigh Federation of Russia’s (BFR) Elena Nikitina. Fellow Canadian Elisabeth Maier was 18th.

Channell, who had just three Intercontinental Cup races and one World Cup start (in which she took third), was satisfied all in all with her campaign.

“I could have cleaned up my runs more. I could have had faster times, but that’s racing. I did the best I could in those four heats so I’m proud of myself, my teammates and my competitors for being resilient this year,” she said in a release. “It’s been a tough year, but a good one and it will make us stronger heading into the Olympic year.”

Both Canadian men failed to qualify for a fourth and final run as Mark Lynch and Kyle Murray were 21st and 27th, respectively. Germany’s Christopher Grotheer came away with the championship over BFR’s Alexander Tretiakov and fellow German Alexander Gassner.

Maier and Murray rebounded in the team event, taking 10th while all the individual medallists added to their totals as Hermann-Grotheer won over Loelling-Gassner and Nikitina-Tretiakov. Channell and Lynch did not start due to injury.

Canadian ski-cross racers have had strong seasons on the FIS World Cup tour so far in 2020-21, but it didn’t translate at World Championships at Idre Fjäll, Sweden on Feb. 13 as none made the finals.

Whistler’s Marielle Thompson ended up in 11th in the women’s contest, as Sweden’s Sandra Naeslund topped Switzerland’s Fanny Smith and France’s Alizee Baron for gold. Courtney Hoffos was the top Canadian, winning the small final to finish fifth. Other Canadians were Hannah Schmidt in 10th, Tiana Gairns in 13th and Zoe Chore in 14th.

On the men’s side, the top Canucks also won the small final as Reece Howden placed fifth with Switzerland’s Alex Fiva besting France’s Francois Place and Sweden’s Erik Mobaerg for the crown. The remaining Canadians were Kris Mahler in 12th, Brady Leman in 20th and Chris Del Bosco in 26th.