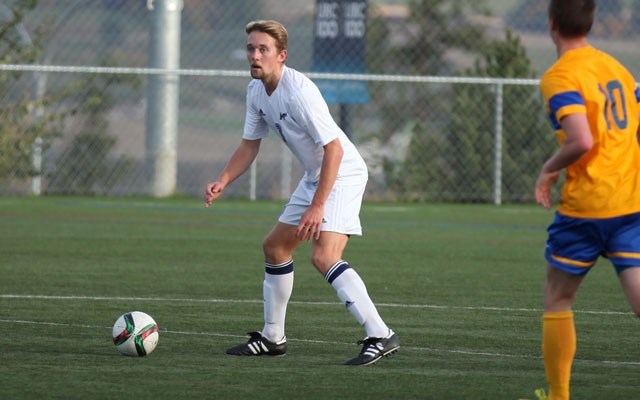 Not bad for a walk-on.

Harrison Shrimpton's soccer career at University of British Columbia-Okanagan began unassumingly, with the Whistlerite being cut from the Heat his first time trying out.

But the centre-back remained determined, asking head coach Dante Zanatta if he could train with the team. Five years later, Shrimpton has wrapped up a career where he started 64 games for the Heat, including 25 at the Canadian Interuniversity Sport (CIS) level after the squad was promoted two seasons ago. He rarely left the field in that time.

Zanatta praised the outgoing defender for his work ethic and steadfast resolve to constantly improve.

"Harry is one of the most outstanding young men that I've had the privilege to coach," said Zanatta. "He came into our program as a walk-on and built his career up into him becoming a leader and a veteran and helping young guys.

"Every year, Harry's learned the game better. The first ID camp when I came up here, we actually cut him. He came back and said 'I'm going to school here. I want to train, can I come out?'

"He improved himself year in and year out and becoming a leader over the five years is not something that comes overnight."

Shrimpton said he enjoyed being called upon to be a rock for the Heat, even in the midst of a gruelling campaign.

"The season's really tough. We play doubleheaders every weekend and train throughout the year, so to be able to have that knowing that you have to go through it all is a good thing to have," Shrimpton said. "Playing as a centre-back, you're usually expected to be playing the full 90 minutes and working hard for every minute of it. It's something I've gotten used to and I feel I've gotten better as the game goes on. I enjoy every minute of it."

Shrimpton's university career ended on Oct. 18 after the Heat fell 6-0 to the top-ranked UBC Thunderbirds and the club finished fifth in the Canada West Universities Athletic Association's Pacific Division, finishing four points back of Trinity Western for the fourth and final playoff spot.

After a disappointing 1-4-1 start, the Heat reeled off a five-game undefeated streak to climb back into playoff contention before seeing their dreams dashed by the Thunderbirds.

The run started with a 3-0 victory over playoff-bound University of Fraser Valley in Abbotsford.

"We had a really tough start to the season, losing games we should have won, but that weekend, we beat UFV. They're a great squad and have done really well this year," Shrimpton said. "In that game, we were able to reignite some hope for a playoff run.

"It was a lot of fun to be part of. Everyone played really well."

A major part of Shrimpton's legacy was helping the UBCO program attain legitimacy in the program's two years under the CIS umbrella, helping the squad reach the playoffs last season. Even with a bit of a step back results-wise this year, Shrimpton feels the future is bright as the 11 rookies on the team this year continue to progress.

"It's a very physical league. There are a lot of big boys that are around and for 17- and 18-year-olds, it can be hard to play," he said. "It can be hard to adjust — I know that's what I went through in my first couple years — adjusting to the speed of the game so quickly. You have to think everything out and be confident in what you do.

"(You're) reaffirming that they're good players and deserve to be here and being positive with it all, even though they're making mistakes, you learn from that mistake and you move on."

Shrimpton anticipates his competitive playing career is done, but stressed he'll keep playing in whatever capacity he can. Interested in staying in Kelowna, he also hopes to remain involved with the team.

Academically, Shrimpton is set to graduate in April with a degree in human kinetics. He plans to work for a year before applying to grad schools.

"I'll be taking a year off to get some work experience and volunteer experience because that's a big part of it," he said. "I also might be sticking around here to help with the team for the next year, so it would be cool to be a part of that."

Zanatta said while nothing is official at this point, he'd like to bring Shrimpton aboard for both his soccer knowledge, natural ability to teach and "great demeanour."