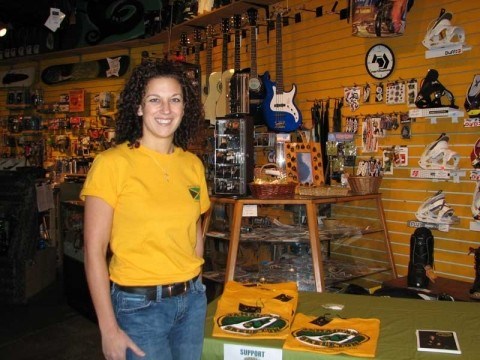 Jamaica's foray into bobsleigh is a well-known story, from qualifying as underdogs for the 1988 Winter Games to the 1993 movie Cool Runnings featuring John Candy. After failing to qualify in 2006 for the first time since the team was established, the boys in green, black and gold are back at it again looking for a berth in the 2010 Games.

This is not their story, although the underdog theme suits Rindy Loucks, who is hoping to represent Jamaica in the sport of skeleton in the 2010 Winter Games.

Although Loucks was raised on Vancouver Island she has extended family in Jamaica. She is currently going through the process of getting residency so she can represent Jamaica in the sport of skeleton in 2010. That's the first hurdle of many that Loucks has to clear to compete in the Olympics, and although it will be a challenge she believes she has a chance.

"I'm clearly the underdog, a lot has to happen between now and the Olympics. But at the same time I wouldn't be here if I didn't think I had a shot at qualifying," she said.

Loucks took an interest in sliding sports early on, she said, especially in the sport of luge. She kept that dream on the backburner for a while as school and life took over, but after the 2002 Games she decided to give it a try. She went to Calgary to learn more and to take part in camps, but was already considered too old for a sport that begins recruiting when its athletes are in elementary school.

However, 2002 also signified the return of skeleton to the Olympic schedule since it was removed in 1948, and the sport was wide open.

"Skeleton didn't make a big deal about age, it's all about ability and making the commitment," said Loucks, who learned the sport in Calgary. She even made the national driving school for athletes, but she didn't have the right skills at the time to go further. She was always more of an endurance athlete than a sprinter, and needed more time to work on her starts.

She missed her window to represent Canada but never gave up her dream. Last season she committed to making another run at the Olympics by joining the America's Cup and Intercontinental Cup circuits while representing Jamaica. She did it without coaching, and headed into most events "blind" with only a few training runs to get used to the courses.

While she still considers herself among the slower racers, she managed to rank fifth overall in the America's Cup, 24 th in the Intercontinental Cup, and 53 rd in the world, and to qualify for the 2009 World Cup Championships at Lake Placid.

She is coming into this season with more experience, a better sled, more competition runs under her belt, and confidence.

"There are seven races at the start of the season until the points cut-off," she said. "The best case scenario for me is to get the points to qualify early, but I definitely have my work cut out for me."

The Olympic cutoff excludes women who rank outside of the top 45 in the world, but countries can guarantee themselves two or three quota spots and 20 countries will only be allowed to enter one athlete each. To be truly safe Loucks says she can't rank lower than 35 th in the world by the time the selection period wraps up on Jan. 17.

Her comfort level is high on North American tracks where she has had the most training, including Lake Placid, Calgary and Salt Lake City. Races at those facilities are her best chance to earn points. She also knows the European tracks a little better, but she says her results will depend more on how many World Cup athletes show up to Intercontinental Cup events.

Loucks has had a few runs by now at the Whistler Sliding Centre - considered the fastest and most technical track in the world - and is slowly finding her groove. She spent five days last week learning the track, topping 125 km/h in the process. But this week she is stepping it up a notch with the goal of getting much faster. The top women will be breaking 135 km/h.

Athletes that are not on the Canadian team get a maximum of 40 runs on the Olympic track, as mandated by the international sports federations, while Canadian athletes will get additional weeks of training - one of the advantages of home field.

For the most part Loucks is self-financed, although she has some help from her father purchasing gear and clothing. Technically she is a member of the Jamaican Bobsled Team - bobsleigh and skeleton have the same international sanctioning body - but they are strapped for resources themselves.

To raise money Loucks made a public appearance at Katmandu Ski and Board on Sunday to sign shirts and other merchandise, which the store has agreed to stock to support Loucks's bid for the Games. With skateboards and guitars hanging on racks behind her Loucks seemed completely at ease with the risks she's taken to get this far.

Although times are posted during International Training Week, she doesn't even compare herself to other athletes.

"Most of the athletes are World Cup athletes, and most of them have been here before. I've also been doing push starts instead of sprinting into the starts as I get used to the course, so I can't really compare myself to anyone," she said. "All I know is that I get a little faster every day, I'm faster than I was last year, and I'm making progress. I still have a long way to go to get to my big goal of making the Games, but I'm accomplishing a lot of little goals as well. Like I said, I believe I have a shot. Right now I'm also enjoying myself, and the challenge."