Ski jumpers put on a show 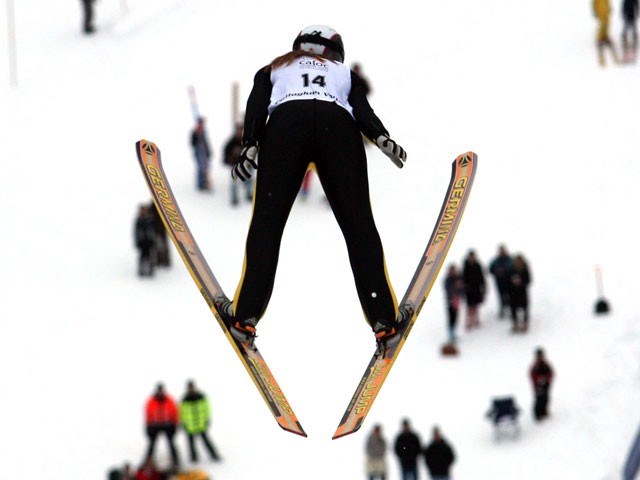 Taking Off One of Canada's female jumpers flies over the landing area in Saturday's normal hill competition at Whistler Olympic Park. Photo by Brad Kasselman, VANOC.

Of all the weather-related hardships Olympic organizers may have to deal with in 2010, it appears that snow is no barrier to hosting ski jumping events.

Whistler Olympic Park held a North American Nordic Combined Junior Championships and the Canadian Ski Jumping Championships last week, while the region was frosted with well over 130 cm of snow.

There were delays and some cancellations, but most events took place as planned. The Callaghan Valley Local Organizing Committee (CALOC) and a group of Squamish businesses under the banner of Squamish Life, provided volunteers to help out and a tent to give hundreds of spectators and officials a place to get warm.

In the Nordic Combined 10 Km Cross Country race, Taylor Fletcher and Nick Hendrickson of the U.S. took the top two spots, followed by Canada’s Wes Savill. Savill completed the 10 km cross country race in 29 minutes, 27.6 seconds, and earned a score of 147.0 on the jump.

The 5 km Nordic Combined race scheduled was bumped back a day, but did take place.

Taylor Fletcher of the U.S. once again took the gold, while Canada’s Wes Savill moved up to second place. Alex Madden of the U.S. was third.

The only other Canadians to make the top-10 were Sean Van Es in seventh place and Barrett Martineau in ninth place.

On the women’s side there was only a 5 km race, with the jump on Saturday and the race on Sunday. The top three spots went to Canadians, with Nata DeLeeuw in first, Atsuko Tanaka in second and Zoya Lynch in third.

The Canadian Ski Jumping Championships got underway on Friday, Jan. 4, as ski jumpers tackled the large K125 jump in Whistler Olympic Park. The event was moved up by two hours to take advantage of a break in the weather, much to the disappointment of media that showed up two hours late as a result.

It was a good day for Canada, with Stefan Read of Calgary making the longest jumps of the day in the first and second rounds. With style points, he finished with a score of 243.2, or 4.7 points ahead of teammate Greg Baxter. Baxter jumped 130 metres in the first run, and 125.5 in the second.

Third place also went to a Canadian, with Mackenzie Boyd Clowes jumping 130 metres and 120 metres to claim the bronze medal. The rest of the spots in the top-10 went to American jumpers, with the exception of Calgary’s Trevor Morrice in seventh place.

Teammate Jessica Jerome jumped 118 and 107.5 metres respectively, and finished more than 30 points back with a score of 175.4.

Zoya Lynch was the top Canadian with jumps of 101.5 and 98.5, finishing with 123.5 total points. Rounding out the top-10 for Canada were Atsuko Tanaka in fourth and Katie Willis in eighth.

In the normal hill competition on Saturday, taking place on the K95 jump, the longest jump of the day belonged to Lindsay Van of the U.S., who went 105.5 metres on her first jump and 92.5 metres on her second.

Second overall, as well as second for the women’s field, was Jessica Jerome of the U.S. with jumps of 102 and 91 metres, while Canada’s Atsuko Tanaka picked up the bronze medal with two jumps of 83.5 metres, and style points.

Other Canadians in the top-10 were Katie Willis in fourth, Nata DeLeeuw in fifth, and Zoya Lynch in eighth.

Other Canadians in the top-10 were Mackenzie Boyd-Clowes and Greg Baxter, who tied for fifth place.

The team jump event scheduled for the afternoon was cancelled because of the incoming storm, which brought high winds and snow.

Stefan Read, the nephew of Crazy Canuck Ken Read, was a little less happy with his performance on the normal hill than the large hill but was generally happy with his weekend.

“I don’t know why I has having so much trouble on the smaller jump,” he said. “There was more wind today than yesterday, but I don’t want to make excuses. I think we all got a little cold on the jump with the delays on the course and the injury, and nobody did as well as they wanted to.”

Read says he looks forward to coming back to Whistler Olympic Park in the future for competitions and training — including a Continental Cup competition in February.

“It’s so great for us to be able to hop on a plane in Calgary, land in Vancouver and drive two hours up here to train at this facility,” he said. “Usually we have to fly to Europe, eight or nine hours, then drive another four or five hours to get to the jumps — which are busy with all the European teams.

“I think we’re going to be spending more time here training in the future, staying in Squamish, and take advantage of the early season and being able to jump on snow until pretty late in the spring.”

Read, who placed 30 th in the 2006 long hill competition at Torino, has his sights on the 2010 Games. As the host country, all Canada has to do to qualify an athlete to compete is earn a single FIS point next season — something Read says will be relatively easy to accomplish. He’ll also have to continue to out-jump the other Canadians looking to earn quota spots.

“(In 2006) it was our goal just to get Canadian jumpers back into the Olympics, but in 2010 we’re looking to be competitive with the rest of the world at home,” he said.

Brent Morrice, head of Ski Jumping Canada, is confident that Canadian jumpers will do better than expected because of Whistler Olympic Park. Ski Jumping was recognized as one of the sports where Canada had the least chance to medal in 2010 by Own the Podium 2010.

“The athletes that have been here using the venue have had an excellent opportunity to try out the jumps, and were all quite impressed with the facilities,” he said. “I can tell you that we’re going to be out here training a lot in the next two years, from the time there’s snow until the snow melts. Hopefully we can keep it for the Canadians only as much as possible in that time.

“Right now our men are jumping well, they’re qualifying events, and they’re improving steadily. I expect them to peak around 2010, which is what we’ve been working towards, and to contend for the podium.”