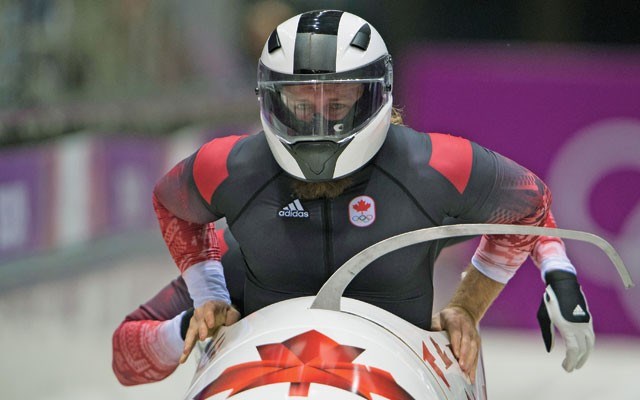 Bobsledder Justin Kripps was among the Canadian athletes who supported the Canadian bid for the 2019 IBSF World Championships, which were awarded to Whistler on June 2. PHOTO BY JASON RANSOM COURTESY OF THE CANADIAN OLYMPIC COMMITTTEE

Whistler has been awarded the 2019 World Championships for bobsleigh and skeleton.

The event was awarded by the International Bobsleigh and Skeleton Federation during its annual congress in Ghent, Belgium. At the same time, it was announced the track would host a World Cup race this coming season from Feb. 19 to 24, 2016. Whistler has never hosted the World Championships and hasn't welcomed a World Cup event since 2012.

Whistler Sport Legacies president and CEO Roger Soane was thrilled to bring the world's best athletes back to British Columbia.

"When you build a facility for such a world-class event as the Olympics, it becomes a legacy for not only our destination but for sport and for Canada," he said. "It's important that the legacy is still recognized by the actual sporting bodies that run the sports around the world.

"For them to come back and use the facility for such a prestigious event, it tells me that what we're doing at Whistler Sport Legacies is certainly preserving the venues for world-class competitions and world-class athletes. It's what we're about."

It's also the first time Canada will host the world championships since 2005, when Calgary performed hosting duties. Bobsleigh Canada Skeleton president CEO Sarah Storey said in a release she's honoured for the opportunity.

"The Whistler Sliding Centre is known by sliding fans as one of the best tracks in the world and we are thrilled to have the opportunity to host the premier sliding sport event on the international race calendar in Canada," Storey said.

The WSC beat out bids from St. Moritz, Switzerland and Altenberg, Germany, with St. Moritz falling out in the first round of voting before Whistler edged Altenberg by a 20-19 decision in the second round. Soane noted Whistler was trailing after the first round, as Altenberg had 15 votes, Whistler had 13 and St. Moritz dropped off with 11. However, the local centre was a popular fallback option for the Swiss supporters, who boosted the Canadian bid.

"No one was going to win on the first vote. We knew it was going to go down to two votes," Soane said. "It was exciting and close and we're pleased."

All three levels of government backed the bid, with Soane noting Mayor Nancy Wilhelm-Morden and federal Minister of Sport Bal Gosal submitting videos in support of the bid.

With the track itself still in prime shape as a relatively young facility, Soane said the main focus would be ensuring all the surrounding considerations are tip top.

Soane expects traffic will pick up well in advance of the championships, as new drivers will look to learn the track, and more experienced drivers seek to reacquaint themselves.

"There was a lot of support to come back to Whistler, the reason being is that they realize they want to grow the sport. They realize that they need to keep all these tracks constant and relevant," Soane said.

"It's time for the world to come back to Whistler at this sport and at this level. I'm really pleased and I think the majority of people in the room were pleased to see that Whistler is back on the map."

At the congress, the organization voted that a nation can only send two sleds to a world championship or Olympic event beginning in 2017. As well, it voted to adopt a new name, as it was previously known as the Fédération Internationale de Bobsleigh et de Tobogganing (FIBT) for its entire 92-year history.