Sliding clubs ready for their turn

Local luge prospects get first change to ride ice this weekend
Oct 31, 2008 8:03 AM By: Andrew Mitchell 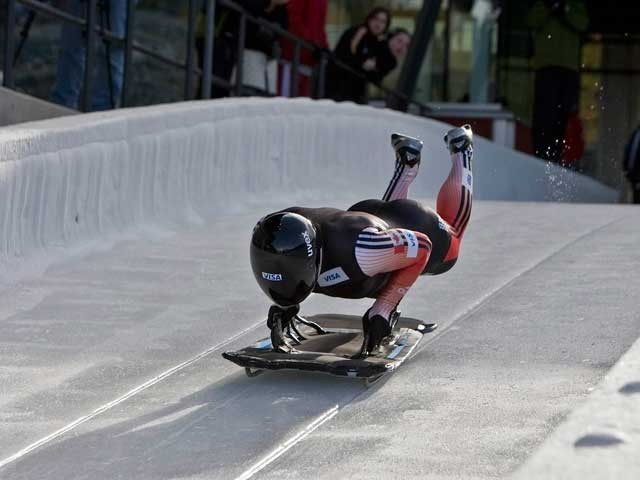 While members of the national and development bobsleigh and skeleton teams got to test the Whistler Sliding Centre track last year, and have spent the past three weeks here learning the ins and outs of the world’s fastest track, the legacy of grass roots luge, bobsleigh and skeleton programs is slowly being realized.

This weekend, up to 40 aspiring luge athletes aged 8 to 14 that have taken part in recruitment camps are invited to the Whistler Sliding Centre to try out the sport on ice.

Nicole Simon, a former Olympic luge athlete and program coordinator for the Canadian Luge Association, arrived in Whistler last February and has been working with the B.C. Luge Association, the B.C. Bobsleigh and Skeleton Association and the Track Club to build programs for all the sliding sports.

According to Simon, the aspiring luge athletes will have two days to ride an actual luge on ice. The recruits will be on ice from 2 p.m. to 4 p.m. on Saturday, and from noon to 2 p.m. on Sunday.

A handful of athletes did go to Calgary for a camp last year, but for most this will be a first.

“We will be starting a little lower, at curve 12 out of 16 curves, so there are only four curves,” she said. “It’s enough to get a taste of what the sport is all about in a safe way.”

After the camp, interested athletes will be invited to join a domestic program that will train three times a week, evenings and weekends, from late November to the end of March. As well, Simon is hosting four more recruitment camps through the winter, hoping to fill a roster of around 40 kids.

The domestic program is limited by the amount of equipment and coaching available, but Simon would like to fill the program this year and expand it in future years.

As they learn, athletes will progress further and further up the course.

“They will progress pretty slowly. They have to get used to the sled and learn how it works, get used to the speeds, get everything dialed in at turn 12 and then progress in stages to various start heights,” said Simon.

“We also have a few races scheduled through the winter season, a few B.C. Cups and a provincial championship. The athletes will also have a chance to travel to Calgary for the youth Canadian Championships in February.”

The cost of taking part in the program is $850 for the year, which includes the equipment, coaching and ice time through the winter, and a dryland training program in the summer.

Most of the athletes taking part in the luge recruitment camps are from Whistler, although a few are from Pemberton and a few from Vancouver. However, Simon says that the B.C. Luge programs are open to kids across the province.

On the Bobsleigh and Skeleton side, which Simon is helping to organize, the domestic program will be a little late getting started because of the equipment.

“We have about eight skeleton sleds on the way, and we’re trying to acquire eight to 10 bobsleds as well, but the challenge is that they have to come from Europe,” said Simon. “It’s not something that you can go to your local Sportcheck to get.”

The bobsleds won’t be competition calibre, but will be a little tougher and cheaper to withstand the constant practice runs, “and go through a few crashes.”

Simon believes that both the skeleton sleds and bobsleds can be acquired by Christmas, allowing those programs to get underway in the New Year.

Getting on the team is a little different. There’s no maximum age of 14 like in luge, but all bobsleigh and skeleton athletes have to go to driving schools for each sport to get their licence. Right now the only place to get that licence is Calgary, although there will be courses offered in Whistler before the team starts recruiting athletes.

All of the dates and details will be available once the equipment is here, says Simon. The cost will be $300 per year, and the team will train three evenings a week.

While Simon is involved in creating local luge, skeleton and bobsleigh development programs, she is also keeping tabs on the development of The Track Club at Whistler Sliding Centre. The Track Club has roughly 300 members at this point, many of whom are training to be officials, members of the track crew, or volunteers for the World Cup events and Olympic Games.

“We’re all one big family,” she said. “There aren’t a lot of employees (at the national level), just a small group of people that work together a lot. There are a lot of similarities in the sports — and a lot of differences — but from an organizational standpoint it’s only natural that I’m working with all three sports right now.”