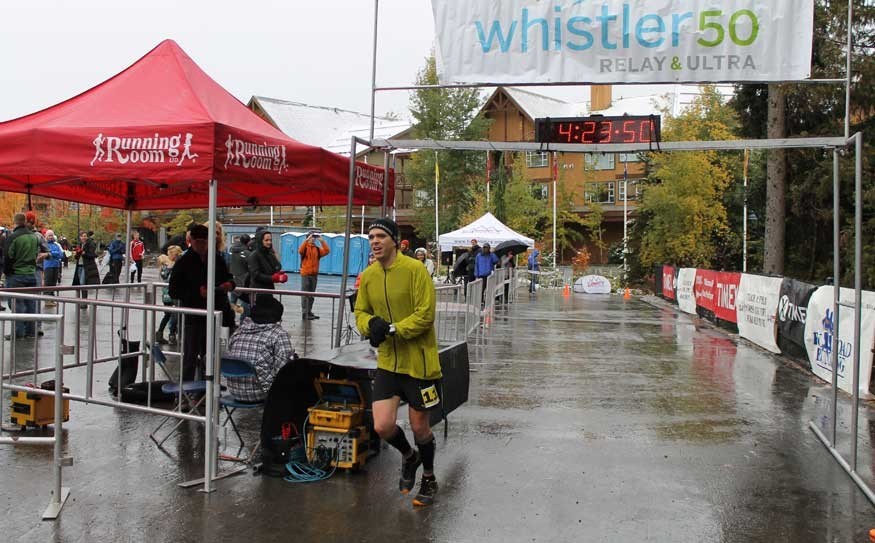 Cool runnings Nanaimo's Jeremy Clegg was the first ultra runner to reach the finish line at the Whistler 50 Ultra and Relay on Saturday, finishing the 50 mile/80km course in 6:23:49.

A trail runner most of the time, he said he switched his road shoes to his trail shoes at the start for some added traction before he headed out into the dark on Saturday morning. If anything his pace was hurt more by the fact that he raced the Victoria Marathon 13 days earlier, placing eighth overall with a career-best time of 2:36:39 — not bad for a guy who's only been running for about three years.

"The biggest issue for me was that I wasn't as fresh as I should have been," he said of his time in the Whistler 50, a 50-mile/80km distance ultra race sanctioned by BC Athletics. "My goal for this race was time-based and I didn't make that, but I had a fantastic time and I'm really happy with the win."

Clegg said he enjoyed the new route, which had a thin layer of snow on the first lap that melted away over the next three. It continued to snow off and on during the day, but at times it cleared up enough to see the local mountains.

"I really liked the course," he said. "For the first lap you're just following the glow stick on the pace bike but the next two laps were in the light and it was a whole new course, it was really scenic. There was great crowd support the whole way and a lot of people came out to cheer you on, so I can't complain."

Clegg also did the Squamish 50 race this year, where he placed sixth.

Asked what he likes about ultra runs, Clegg shrugged. "The truth is I just like jogging all day in the mountains," he said. "It took me a while to build the confidence and fitness to do that, but I ran up Mt. Benson about 70 times this year, and I've been on trails about six days a week. Who doesn't want to be out in the forest?"

Placing second overall, and first among female racers, was professional ultra runner Mel Bos of Kelowna. She needed a strong result to be named to the national ultra team this year, and guarantee her spot in the JFK 50 Mile in Maryland in November.

She had a little trouble with the snow on her first lap, but kept up her pace to finish in 65:34:10, averaging a kilometre every 4:56.

"It was a little slippery with snow and ice on the course, and my quads were in agony the first couple of laps because I was trying not to slip on the downhills," said Bos. "The third lap was perfect running conditions, and then it started to snow again on the last lap — it's always hard when the weather turns, but you also know you're getting closer to the finish."

Bos, who also runs trails most of the time, enjoyed the course with its gravel sections and winding Valley Trail, something you don't get in most road events. And while she wasn't used to running in the cold and snow — especially after the hot, dry summer and fall — she said she was glad she had the chance to test herself in those conditions before heading to the JFK 50.

As for why she likes ultras, she said she enjoys everything about long distance running.

"I love it once I get going, I find my pace and my legs are warmed up," she said. "I love the people. I love where it takes you, and being out there in the middle of the woods."

In total, 30 ultra runners finished the course, while 10 pulled out because of injuries, the cold or other issues. The only Sea to Sky runner to finish the 50-mile route was Edgar Mujica of Squamish, who finished in 11:24:57.

According to organizers the finishing percentage was lower than normal for ultra runners because of the cold, but on the plus side the race included a few younger athletes aged 21 and drew runners from as far away as California and the Northwest Territories.

The main focus of the Whistler 50 — which replaced the Haney to Harrison on the running calendar — is the relay division, with over 120 teams of up to eight runners taking part.

First overall in the Open Men was the Point Grey Port-a-Loo team, which finished the course in a combined 4:31:51. Runners average a kilometre every 3:24 with all eight members posting the fastest times on their respective legs.

How fast were they? The second place team in their category, the Beaver Buzz Racing Team finished almost 20 minutes back in 4:50:24, while LGRR Run Time were third in 5:48:45.

The Police/Fire category went to the Surrey Firefighters A team in 5:38:56, followed by Dave and the Dirty Pickles from Revelstoke in 5:43:51. Port Coquitlam Fire was third in 5:55:29.

Complete results from the race are online at www.raceheadquarters.com.